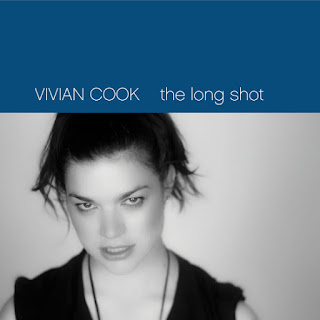 Today, in celebration of the passionate Women’s Marches all over the country, I’ve been listening to some cool female recording artists, such as Vivian Cook. Vivian Cook’s debut release, The Long Shot, features original material, mainly in the pop realm, but with folk elements, and also with a sense of humor. Vivian Cook has a distinct voice, and plenty to say. She grew up in the San Francisco Bay area, and recorded this album in Los Angeles. It was produced by R. Walt Vincent, who has worked with Pete Yorn, Liz Phair and Tommy Keene. R. Walt Vincent also performs on the album, playing acoustic guitar, electric guitar, bass, piano, organ and percussion. Also joining Vivian Cook on this release are Malcolm Cross on drums and Zak Ambrose on acoustic guitar and slide guitar.

She kicks off the CD with “Know-It-All,” the opening verse of which really caught me by surprise the first time I listened to it, and made me pay closer attention: “Turns out a second-hand account of watching your mother die is still/Two hands too close for I cried on the kitchen floor listening to ‘No One Is Alone’”/Boo, Sondheim, you whore/Nobody likes a know-it-all.” I love how emotionally you’re prepared for one direction, but then she switches gears with the line, “Boo, Sondheim, you whore,” a change that had me laughing aloud. By the way, “No One Is Alone” is a song from Into The Woods, a musical that I suffered through once and hope to never encounter again. The song then kicks in after those lines. And check out these lines: “And the only promise I ever made/Was to do anything I could so/Sorry I’m shit at the hospital bit/But if you’re looking to forget I’m the good/Witch of distraction, absinthe ready for action.”

That’s followed by “Whatever,” a cool and surprising pop song, a strange combination of cute and gritty. Like the first song, the vocal line features some unusual and interesting phrasing. Here is a taste of the lyrics: “So let’s do whatever we want/I’m pretty sure it’s legal long as we don’t get caught/Yeah, we can do whatever you please/Long as it ends with you on your knees.” Then “Hazy” is a fun song that begins as sort of a folk tune, but with a catchy chorus you can dance to. But the lines that always stand out for me are these: “Just because I couldn’t come/Doesn’t mean we didn’t have any fun.”  And in “Just Kids,” Vivian sings, “So let’s move somewhere cheap/And just read for like a year/I’ll bring the weed, you bring the beer.” Amen. I’ve had desires like that often throughout my life, and now more than ever it is appealing. Just move away and immerse ourselves in literature and mild drugs.

“Truth” is an oddly beautiful and humorous folk song, which I totally love. This is another that made me laugh out loud, and yet is also a quite moving song, something of a feat, really. The first lines of the song are also the first that made me laugh: “I got lost the other day/So I tried to find my way by the North Star/But no one ever/Really taught me how to do that.” And I love these lines: “You can’t have everything/And nothing at the same time.” This is one of my favorites.

Another favorite is “Nights End.” It has a catchy groove, bordering on reggae. And check out these lines: “Yeah, I was once in love, now I don’t know/What it would take to open up that door/That’s been locked for so long, what do you think?/Just one more song?/If that bitch plays something beautiful/I’ll make him a part of my whole.” Again, there is some interesting phrasing here. Like the line “Yeah, I was once in love, now I don’t know.” Taken by itself, there is something sad and funny about it, like she doesn’t know if she’s still in love. But then the line continues into the next line, so she’s also saying she doesn’t know what it would take to be in love again. Vivian Cook does that quite a lot on this album, running lines together to allow for different and surprising meanings. She concludes the album with “Farewell L.A.,” which opens with these lines: “Seems like everybody’s somebody in L.A./What would you pay for it to rain?” Yesterday, I would have paid somebody to make it stop raining. But that’s a rarity. This is a really strong song, and makes me excited to hear more from this unusual artist.

CD Track List
The Long Shot is scheduled to be released on January 27, 2017 through Omnivore Recordings. However, it seems that it was released with a different album cover in September of 2015.
Posted by Michael Doherty at 11:44 PM