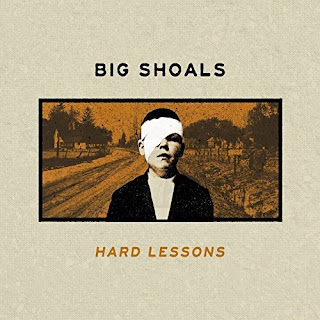 Big Shoals are a band from Gainesville, Florida. Last summer they released their second album, Hard Lessons, the follow-up to their 2014 debut, Still Go On. Hard Lessons features an excellent group of songs, all within the country and folk realm. The band delivers intimate, soul-baring moments, as well as energetic country rock songs. This disc boasts some seriously good lyrics, such as these lines from “The Fall”: “It took losing you/To see what I put you through/It took falling apart/To fix a broken heart.” All the songs were written by singer and guitarist Lance Howell.

They open the album with “Only Queen,” which starts with a sweet, comforting folk vibe, which I appreciate. Ease us in with a touching moment of beauty. “Been holding onto my youth/Like it’s my last piece of gold/Been hiding from the truth/I’m just scared of letting go.” Then when it kicks in, the song takes on a stronger, brighter country feel. “Baby, when I make it back through town/I might give a second thought about settling down/You’d be the only queen to wear my crown.” That sounds so appealing to me right now. This is one of the disc’s many highlights. They follow it with “You Ain’t Nothing Like The Girls Back Home,” which has more of a pop flavor added to the country rock, but is also a love song. “I want to be the one who’s crazy/I want to cross the line/I want to be the one you think of/When trouble’s on your mind.” And after the lines “I want to lose control/I want to sell my soul to you,” singer Lance Howell delivers a good lead part on harmonica. Chad Voight plays drums and percussion on this track.

“Union Son” is a song of a family divided during the Civil War. There is a kind of quiet power to this track. Check out these lines: “But I watched my daddy grow/To a cold and bitter soul/What once he did for country became fun/And every day I fought the fear/That the smoke would one day clear/And I’d have to face my father’s union son.” That’s followed by a more rockin’ number, “Only God Knows.” The line from this song that stood out for me the first time I listened to this disc is: “I’ll never be a better man than who I was when I was with you.” This is a man who sings that he’s left his past behind him and is curious about what an uncertain tomorrow will bring. Usually, a line about leaving a past behind has a positive, optimistic ring to it. But in this case, it’s a mixed bag, since he sings that he was at his best in the past, which makes for a more interesting character and song.

In “Happy For A While,” Lance Howell sings, “I just want to be happy for a while.” It doesn’t seem like too much to ask for, right? I can’t help but agree with him when he sings, “It seems like the world’s gone to hell.” Things are twisted and grim out there, and though the protests and marches yesterday raised my spirits, it doesn’t seem like the state of the nation is going to change soon enough. I’ve been turning to music and alcohol, lots of both. It’s sort of a selfish move, I admit, but “I just want to be happy for a while.” The band then returns to a friendly folk feel with “Love, Fortune Or Fame,” which features more nice work on harmonica. I also really like that catchy bass line. “Did you pray for the sun, and get pissed on by the rain?” Yup.

Another of this album’s highlights is “Losing Hand,” a sad and moving song, with lines like “Dreams are just dreams/I gave this my whole life/Got no kids, got no wife/Just a lost trail of old hearts/And torn at the seams.” There’s also a hard-hitting instrumental section that is really effective. Fans of bands like Wilco should appreciate this. “Losing Hands” is followed by another of my favorites, “Amelia,” which begins with some wonderful work on acoustic guitar before the vocals come in. This song features possibly the most passionate vocal performance of the album. “You took my heart/And left behind/A broken man/A darkened light.” I love this song. The CD then concludes with “The Way It Goes,” which tells the tale of a friendship. “I know time will change you/Hell, it’s changing me too/Back then it used to move so slow/I see our glory days fading out of view/I guess that’s the way it goes.”

The musicians on this album are Lance Howell on vocals, guitar and harmonica; Jacob Riley on bass; Ryan Williams on drums and percussion; Todd Beene on pedal steel guitar; Ryan Baker on piano and organ; and Chad Voight on drums.