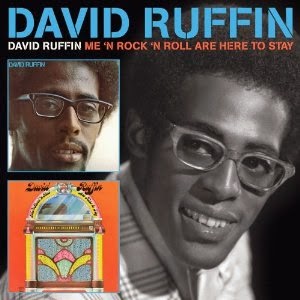 While David Ruffin is most well-known for his work with The Temptations, he also had a good career as a solo artist. Two of his albums – David Rufffin and Me ‘N Rock ‘N Roll Are Here To Stay – from 1973 and 1974 respectively, have now been released on a single CD, with new liner notes by Gene Sculatti.

Bobby Miller wrote the majority of tracks for the first of these two records, and produced that album as well. Some of the tracks have the feel of David Ruffin’s earlier work, and some have a definite 1970s feel, such as “I Miss You (Part 1),” which, by the way, features another Temptation, Eddie Kendricks. The second album was produced by Norman Whitfield.

David Ruffin kicks off with “The Rovin’ Kind,” which opens with the sound effect of a motorcycle driving off. That sound effect is pointless, but the song itself is quite good. It has a light, fun, breezy vibe. This one is driven by the music as much as by David Ruffin’s vocals. It was written by Bobby Miller.

“Common Man,” also written by Bobby Miller, has a slower groove, and the focus is back on David’s vocals.

Things start to pick up for me with “I’m Just A Mortal Man,” with its good rhythm and really nice vocal performance by David. Sometimes he sounds so smooth on this track, but also delivers those great screams of his. “And I thought just how helpless I really am/My hair is turning grey/I’ve got a new wrinkle every day/Guess I’m just a mortal man/Let me tell you all about it.”

“Blood Donors Needed (Give All You Can)”

Things get a bit funky with “Blood Donors Needed (Give All You Can).” This has such a good feel and a wonderful groove, along with serious lyrics about violence in the streets. “A shotgun blast was heard from the ghetto/Guess what/Just took the life of a boy of sixteen.” This is one of my favorite tracks, and features some cool work on guitar during an excellent instrumental section, as well as some impassioned vocals from David Ruffin.

Approximately five minutes in, there is a little break that’s not needed. The song fades out, and a child’s music box is heard briefly. The song then returns to the jam, which then soon fades out. “Blood Donors Needed (Give All You Can)” was released as a single.

“Go On With Your Bad Self” has a lot of energy, with a good groove, and some nice touches on horns. This song was included as the flip side to the “Blood Donors Needed” single.

“A Day In The Life, Of A Working Man”

The first album ends with “A Day In The Life, Of A Working Man,” which was co-written by David Ruffin (along with Bobby Miller). The unnecessary comma in the song’s title makes me think of The Beatles song, as it separates that part from the rest of the title, though this song sounds nothing like “A Day In The Life.”

“I Saw You When You Met Her”

The second album opens with an oddity. “I Saw You When You Met Her” begins with electronic sounds and then sound effects of wind and rain. I always hate rain sound effects in songs. It gets a little more interesting as it approaches the two-minute mark, though the rain and wind sound effects persist even after David’s vocals begin, which is seriously annoying. David’s great, powerful delivery of lines like “Let the four winds blow” isn’t enough to make me like this track.

“Smiling Faces Sometimes” begins with a spoken word introduction about why he chose to record this song: “This song tells it just like it is. The message is simply that it’s just about an impossible task to figure out which of your friends’ smile is a mask. Dig it.” He delivers a good, slow, thoughtful rendition. It was written by Norman Whitfield and Barrett Strong, and was a hit for Undisputed Truth in 1971. Interestingly, it was also recorded by The Temptations and included on their 1971 record, Sky’s The Limit.

The title of this record, Me ‘N Rock ‘N Roll Are Here To Stay, contains grammatical errors. If “‘N” is intended to mean “And,” there needs to be an apostrophe after the “n” as well as before it. This is a common mistake, but it always puts me off. That being said, the title track has a great energy, and bursts open with full force. This one got me dancing.

“Superstar (Remember How You Got Where You Are)”

David Ruffin covers The Temptations’ “Superstar (Remember How You Got Where You Are),” an interesting choice (though technically “Smiling Faces Sometimes” was also a Temptations cover). This has the sounds of being a live track, but it feels more like the audience noise is a sound effect, and it’s distracting. He does say, “Thank you, ladies and gentlemen” at one point near the end, so who knows?

The album ends with a cover of Rare Earth’s “I Just Want To Celebrate.” Again, there is the sound of an audience, and again it seems fake, not like an actual live track. It’s incredibly irritating. Even if it were a live track, you’d want the audience noise taken down in the mix. The audience sound seems more prominent than David's vocals, and it's constant, not like it's reacting to anything that's happening musically. And the audience noise is the last thing you hear on the album, after the song fades out.

Posted by Michael Doherty at 7:08 PM