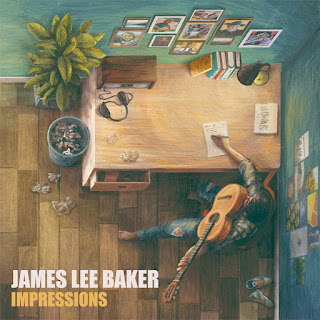 James Lee Baker is a talented singer and songwriter, with a great sense of storytelling. In the fall of 2020, he released 100 Summers, an excellent album that featured original material, and was packaged like a book. On his new album, Impressions, he takes a different course, this time covering the material of other artists, choosing songs written by people who have inspired him, and putting his own distinctive spin on each track. As on 100 Summers, he is joined by some extraordinary musicians, including bassist Roscoe Beck, a name familiar to Leonard Cohen fans, and guitarist Doug Pettibone. And though this release is not packaged like a book, it still contains a relatively thick liner notes booklet, with information on each of the songs chosen, as well as artwork by Zulfikri Mokoagow, the same artist who illustrated 100 Summers. So you’ll want a physical copy of this CD.

He opens the album with “Young Man In America,” a song written by Anaïs Mitchell and originally released as the title track to her 2012 album. It is a strong and moving song, and James Lee Baker creates a rather haunting atmosphere at the beginning. He is joined on vocals by Laurie MacAllister, whom you likely know from her work in Red Molly and with Ellis Paul. Katie Marie is on percussion, Dave Sher is on electric guitar, and Michael Ramos is on piano. James Lee Baker follows that with a really good rendition of David Gray’s “Living Room,” a song from Gray’s 1993 album A Century Ends. On this track, in addition to percussion, Katie Marie provides backing vocals. “And last year’s just a blur/Through a head full of beer.” I appreciate the bright, hopeful tone.

I first learned about James Lee Baker’s music through Ellis Paul. During the pandemic, Ellis Paul began a series of online concerts, and once a week invited a special guest to join him remotely. James Lee Baker joined him in August of 2020, playing a couple of songs from what was then his upcoming release, 100 Summers, and I was struck by his talent. Well, on this new album, James Lee Baker covers one of Ellis Paul’s songs, “Did Galileo Pray?” James Lee Baker slows the song down a bit, and delivers a passionate and moving rendition. Part of the power of this version comes from the backing vocal work. Roscoe Beck, Katie Marie, Laurie MacAllister, Dave Sher and Michael Ramos all provide backing vocals on this one. I also really like Dave Sher’s work on mandolin. This is a gorgeous rendition, and is one of my favorite tracks on this release. Then “Nashville” begins gently on acoustic guitar. “I was barely breathing/I was crawling home.” James Lee Baker certainly has chosen some excellent and moving material to dig into on this album. This song was written by David Mead, and was included on his 2004 album Indiana. “Maybe I’m a fast train/Rolling down a mountain/Watching all my life go by/You’re a distant memory/You’re an exit sign.” And because he has pulled us close with the song’s gentle vibes, it is all the more powerful when he raises his voice and belts out certain lines.

He lightens things a bit with “Rolling Rock And Rock ‘N’ Roll,” written by Steve LaSala and Gene Kowalski. This one takes me back, in part because when we were broke in our early twenties, Rolling Rock was still plentiful. Do they still make that beer? “I’ve learned my lesson, I’ll go straight/I’ll be home every night by eight.” Eduardo Barbosa plays upright bass on this track, and Stasia Estep is on backing vocals. This track also features some really nice work by Doug Pettibone on guitar. Then from John Gorka’s work, James Lee Baker chooses “Morningside,” a song I love, in part because of the line “You ask the world, and the world says no.” The first time I saw John Gorka in concert, I didn’t actually see him. This was at Tanglewood, and there were several artists playing that day. My friends and I had spread out a blanket or two on the lawn, and I lay back and closed my eyes. “Wake me when John Gorka is on,” I said. But no, I slept through his entire set. Later my friend told me she thought I was awake, because I was smiling the entire time and tapping my fingers and so on. Anyway, “Morningside” came along a decade later. It is a positive song about using our time well, something that is on my mind a lot these days. “Better be off, I’ve got dreams to dream/Though it seems uphill and a little extreme/If I can find hope in this fading light/Then I’ll find you on the morningside.” Beautiful. Michael Ramos plays accordion on this track.

Doug Pettibone delivers some really nice work on pedal steel on “Most Promising Officer,” a song written by Richard Todd. On this one Molly Venter provides the backing vocals. Like Laurie MacAllister, you know Molly Venter from her work in Red Molly. This is another powerful song. It is followed by “Some People,” written by Kevin Faherty. James Lee Baker performs this one solo, just vocals and acoustic guitar. Nothing else is needed. This song has a sweet vibe. “Some people read you like you’re a mystery/Some like a valentine/Some people meet you at a point in your history/With a heart that’s right on time.” Then “Deepening Of The Stillness” has an uplifting folk sound. This song was written by Richard Todd, the only songwriter represented twice on this disc. This track features Javier Chaparro on fiddle, and Matt Hubbard on harmonica, and is another of the disc’s highlights. Roscoe Beck delivers a wonderful bass line, and I especially love that work on fiddle. “Sometimes words get left unspoken/Sometimes words just vanish in the air/We are here for but a moment/Before we whisper our last breath/Did I show you how much I love you.” Ah yes, life is short, and we should spend as much of our time as possible showing those special people in our lives that they are loved. James Edward Baker, Mary Margaret Dement and Shanna In A Dress provide backing vocals on this track. This excellent album then concludes with a Bob Dylan song, “Just Like A Woman,” featuring Joel Guzman on accordion, and Molly Venter on backing vocals. When James Lee Baker sings the first line, “Nobody feels any pain,” I believe him. Something about the way he delivers this song puts me at such ease, which I appreciate.

Impressions is scheduled to be released on May 6, 2022.

Posted by Michael Doherty at 9:37 PM