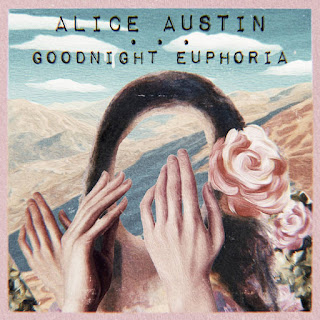 Alice Austin is a singer, guitarist and songwriter known for her work in the Vermont power pop band Zola Turn (you likely remember “Tastes Like Nothing”) and then The Lavas, which had a heavier punk sound. In 2009, she started a solo career with the album To A Star in The Yard. Since then, she’s released several EPs and singles, while also singing in the all-female Black Sabbath tribute band, Black Sabbitch, and moving from the east coast to Los Angeles. Now she’s releasing her second full-length solo album. Titled Goodnight Euphoria, it contains all original material, covering a good range of styles and moods. Joining her on this album are David Drouin on guitar, bass and backing vocals; Seth Campbell on keyboards; and John Persson on trumpet.

The album gets off to a fantastic start with “No Such Thing,” which has some seriously catchy elements, including that rhythm, but also really rocks on the chorus. “The dream was a burden, the fantasy too/Now all that is left, the idea of you/No such thing as same place, same time.” A very strong opening. Alice Austin then changes gears with “Wooden Mind,” a slower, darker gem that kind of gets its hooks into you early on with that guitar work, and then by the way she delivers the lines, drawing out certain words like she’s pulling them from some inner place, or like she’s teasing us with them. “No technician gonna fix her/No modern lover can replace her/There is a hole in every corner/Where she left her wooden mind.”

“Goodnight Euphoria,” the album’s title track, comes on strong with a steady, prominent rhythm. But it is the vocal work which really stands out for me, and helps to make this one of my personal favorites. There is also some really great bluesy guitar work throughout the track, particularly in the second half. She switches gears again with “Relentless Sunshine” (a title I love, by the way), which has a kind of sweet folk vibe as it starts, and soon shows itself to be a more serious, somber number. “Asleep under the street lights/Forgot to go home again.” This is another of the album’s highlights. Then as “Loveless Waste” kicks in, it feels like it might go into fun power pop territory, but soon it is clear there is more going on here. I love the way Alice Austin is able to surprise us on these tracks, as she does again with “Oxygen,” which has a gorgeously dark vibe and includes some nice work on keys. “Who’s gonna take you in/Who’s gonna take you in/Who’s gonna roll you on your side/And feed you oxygen.” The track builds wonderfully toward the end as she repeats, “Who’s gonna come?” There is a glorious intensity to the song at that point.

“Everything You Touch” is a solid pop song. “Everything you touch falls away from you/People keep on saying I’m the one who’s hurting you.” Then “Jellyfish” has something of a late 1960s vibe, with touches of psychedelic folk. It also features some excellent vocal work. “Hands above the earth/Touch the other side/For the hell of it.” That’s followed by “The Neighborhood,” which has such a cool vibe right from the start. I love that guitar work. There is something of a timeless flavor to this one, and a delicious power at moments, particularly in the vocals. The entire album is excellent, but this song in particular stands out. It plays out like some spectacular underground film in your brain.

“Never Occurred To Me” has a familiar beauty, reminding me a bit of George Harrison’s “Isn’t It A Pity.” “Your arms are looking frozen/When you don’t dance with me.” That’s followed by yet another cool and powerful song, “The Ward.” This album started off strong, and still somehow manages to just get better and better. It concludes with a gorgeous song titled “Saving My Tears,” this one featuring Emily Garcia on violin. Check out this song’s opening lines: “I’m saving my tears for you, boy/‘Cause I don’t hurt now, but I might tomorrow.” Wonderful, right?

Goodnight Euphoria is scheduled to be released on April 22, 2022. By the way, in addition to being a seriously good album, it has an excellent cover. The art was done by David Drouin, who also produced the album, in addition to playing the instruments already mentioned.