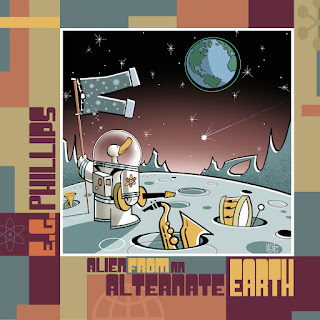 Who among us hasn’t felt like an alien at least occasionally in the last five or six years? I sometimes wonder if I haven’t inadvertently slipped into an alternate reality, one where stupidity is a virtue and honesty a liability. And so there is an undeniable appeal to the title of E.G. Phillips’ new album, Alien From An Alternate Earth. It is a title we can connect to immediately. E.G. Phillips is a singer and songwriter who has created material in the jazz, folk and country realms. There is a sense of humor, a sense of play to his approach. Here is a songwriter with his own peculiar view of the world, and we are lucky he is happy to share it with us. Joining him on this release are Kevin Seal on keys; Jeffrey Burr on guitar; Paul Eastburn on upright bass; Chris McGrew on percussion; Rich Armstrong on flugelhorn, trumpet and trombone; and Daniel Casares on flute, tenor saxophone and baritone saxophone.

The album opens with “Till We Have Faces,” a song most folks will relate to. There are people I’ve known for a couple of years, and I don’t really know what they look like, for they’ve been wearing masks the entire time. Of course, my face is likewise a mystery to them. This song comes out of the pandemic and looks forward to a time when we will see each other’s faces. “Your naked eyes flashed a smile at me/In a way that’s bound to hurt.” It has a bossa nova groove, as we lightly dance our way through this bizarre existence. “Till We Have Faces” is followed by “The Infertile Valley,” a mellow and strangely captivating song about departing a place that is not favorable to life. “Maybe they felt like moving on.” Renee Padgett provides some really nice backing vocals on this track.

“The Octopus Song” is the first song I heard from this release, the one that got me interested in it. It’s also the song that provides the album with its title, in the lines “You slipped through the cracks between worlds/And you cannot return/You’re an alien from an alternate Earth.” I love the work on trumpet and saxophone, which help to create an interesting mood. It feels like an odd sort of love song, one I cannot help but enjoy. Then “That May Not Be Good Enough” has a totally cool sound and groove, with some biting lyrics. He doesn’t hold back much regarding the person he’s addressing here, but is still kind of smooth in his delivery. “You butchered your own damn name/You’re a poster child for the vain/You may be good looking/That may not be good enough.” And we get more great stuff on both trumpet and saxophone, as well as guitar.

The lyrics come at us at a rather fast clip at the beginning of “Fallen Out Of Love,” but it is the moment when he tells us “I’m sick of existing just to exist” that stands out for me. There is a brief pause after that line, and then the song takes a turn, developing a different groove. Check out these lines: “I think I’ve heard almost every excuse/Those I make myself are the most obtuse/I’m no good when it comes to the truth/I’ve fallen out of love with you.” That’s followed by “The Mockingbird’s Repertoire,” which features some good work on flute. Then “Ode To The Wildhorse Café” has a pretty sound at the start, like a child’s fairy tale coming from a music box, fitting for a song that mentions unicorns (“She’s sprinkling sparkles/On unicorn lattes”), magic (“She’s a little bit of magic/In the middle of nowhere”) and toys (“I found this brand new toy”). The disc concludes with a lively, fun tune titled “Brave Heart, Luna!” This is like a lounge singer who perhaps has gone just a little mad, backed by some wonderful stuff on trumpet, trombone and saxophone. “It’s okay for you to cry/It’s okay to cry sometimes/Just know who’s on your side/No matter how dark it may seem.”

Alien From An Alternate Earth is scheduled to be released on April 22, 2022.

Posted by Michael Doherty at 3:04 PM