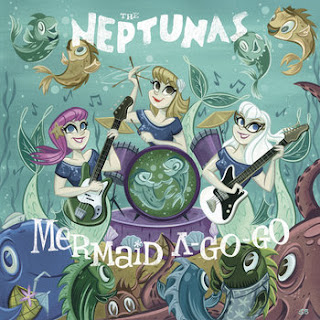 The Neptunas are a group of three mermaids that came onto land in the 1990s to share their surf and garage music with mankind, putting out a couple of albums that decade for us to enjoy. Then they took a long break, returning to the sea to work on other projects, secret stuff for the government of Atlantis, I’m sure, and nothing to do with shipwrecks. They’re not that type of mermaid. Now they’ve risen to the surface again with an absolutely wonderful album. Titled Mermaid A-Go-Go, it features mostly original material. Just taking a glance at the song titles will give you an idea of what this band is about. Titles like “Nancy Drew’s Wetsuit” and “Neptuna Car Wash” show that these mermaids have a sense of humor (see, I told you they’re not the type to cause drownings and shipwrecks). Leslita Neptuna is on guitar and vocals, Pamita Neptuna is on bass and vocals, and Laura Bethita Neptuna is on drums and vocals. Joining them on this release are Truko Casasola on percussion, Alex Gonzalez Villasenor on trumpet, and Danny Amis on baritone guitar and keyboards. (By the way, from time to time Pamita sneaks onto land in the guise of a fortune teller named Madame Pamita; it was under this identity that I met her several years ago.)

The Neptunas open the album with “Billy The Squid’s Water Pistol,” a seriously cool instrumental track that has a slightly more serious tone than you might guess from its title. That’s followed by “Secret Of The Sea,” which has a beat and sound that will make you think of 1960s pop and garage bands. It has a cheerful vibe, and features some good work on guitar. “Undersea Grand Prix” is another cool instrumental tune, this one with some nice pop influences and a cinematic style. Seriously, I want to make a beach movie just to be able to include this track in it. The movie would have dark elements and an exciting, though slightly twisted love story, and plenty of dancing, and everything would come out all right in the end.

Most of the tracks on this album are originals, but there are a few covers, the first of which is a good rendition of The Kinks’ “Till The End Of The Day,” a song included on The Kink Kontroversy and released as a single in 1965. I’ve mentioned this before, but my standard response to the “Beatles or Stones?” question was always “Kinks.” And what a perfect choice of bands for The Neptunas to cover. That’s followed by “Shark Tooth Necklace.” Perhaps because I was accustomed to the surf songs being instrumentals, I was caught by surprise when the vocals came in. Surprised and delighted. This is just fun, the only lyrics being the song’s title (sort of like how the word “tequila” is the only lyric of the song “Tequila”). And is there a bit of The Waitresses in the way they deliver that one line? Anyway, I love it. Then “Lord Jim” is a kind of goofy and totally endearing pop song. “He’s a well-bred mop head in a garage band, in a garage band/Look at him, Lord Jim, he plays guitar, he turns it up real far/We will steal his moves and beat him at his own game, yeah.”

“Mermaid A Go Go,” the album’s title track, is another totally fun tune. It is interesting that the album’s title has hyphens and the song’s title doesn’t. Okay, maybe that is only of interest to me, but there you have it. Anyway, this is wonderfully silly song, that even mentions the band’s name early on: “The Neptunas have a shack down under the sea.” And, being mermaids and all, this line about specific dances at the Mermaid A Go Go makes perfect sense: “We don’t do the Watusi, but we’re doing the Swim.” And check out these lines: “The mermen are flawless, and the mermaids are braless/At the mermaid a go go, yeah.” Sounds like the place to be. The coronavirus isn’t spreading under water, is it? That’s followed by “Nancy Drew’s Wetsuit.” This is one of the titles that made me laugh before I’d even taken the disc out of its case. It’s a good instrumental number, and its title is fitting, for there is a bit of mystery, a bit of intrigue about this one. Though what precisely is being discovered in this investigation is left up to our imagination.

The album’s second cover is “Poupée De Cire, Poupée De Son,” written by Serge Gainsbourg and recorded by France Gall. Interestingly, like the album’s first cover, this song is from 1965. As with the original, The Neptunas deliver this one in French, and their version is adorable. It is followed by a cover of The Super Stocks’ “School Is A Drag,” this one from 1964 and written by Gary Usher. That band combined the surf sound with lyrics about racing cars. “Every single day now, school is a drag/In every single way now, school is a drag.” The lyrics are delivered with a certain sweetness, and The Neptunas give the song a cha-cha-cha ending. Then “The Abyss” has more of a garage rock sound, mixed with surf elements. That’s followed by the album’s final cover, “The Lonely Bull,” an instrumental tune that was written by Sol Lake and recorded by The Ventures and Herb Alpert And The Tijuana Brass. The Neptunas don’t bother with the sounds of the bullfight at the beginning, and deliver a cool rendition.

In the 1970s, Rose Royce gave us “Car Wash,” a fun disco tune. Now The Neptunas are giving us a song celebrating the underwater version of a car wash, “Neptuna Car Wash,” and it’s just as much fun. “Bring your woody, bring your board/There is no detail we ignore.” That’s followed by “Hey Jimmy Freek,” a fun pop song that even includes hand claps. “Hey, Jimmy Freek/You think that I’m a geek/If I idolize the things you do/Don’t call me a creep/If I want to kiss your cheek/I only want to tell you I love you.” There is a cool spoken word section like in those early 1960s songs, and it mentions Silver Lake. The backing vocals in that section are funny. The disc then concludes with “Sorority Stomp.” Yes, it is a song that introduces a dance, one that “might get you in trouble, might get you expelled.” Again, this music is pure fun, just the sort of thing we need these days.

Mermaid A-Go-Go was released on CD on September 24, 2020 through Altered State Of Reverb, and apparently is going to be released on vinyl next year.

Posted by Michael Doherty at 10:17 AM