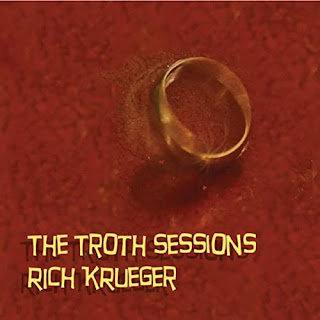 Rich Krueger has had something of an unusual career path. He started playing music at a young age, and was in a band called The Dysfunctionells while he was in medical school, then backed Peter Stampfel in the 1990s. After that, a lot of time passed while he worked at a hospital, before he actively pursued music again. In fact, his debut album didn’t come out until just a few years ago. Titled Life Ain’t That Long, that album was followed by a second album less than a year later, NOWThen, and in between those two releases he was named a winner in the 2018 Grassy Hill Kerrville New Folk Competition For Emerging Songwriters. So after a long pause, it seemed he was hitting the ground running. Now he’s followed that up with his third release, The Troth Sessions. This release is actually a return to some earlier work, featuring demos he recorded in 2002, just him and his acoustic guitar (with one exception). The songs on this disc are about relationships, its title reflecting the subject matter, “troth” meaning faithfulness and the promise to marry. Most of the them are originals, written by Rich Krueger.

Rich Krueger opens this release with “True True Love,” a delightfully odd and sweet song about love and its undeniable and life-changing power. I appreciate the way he mixes that sweet sense with a kind of raw humor, as in these lines: “You can take your stupid little smirk/You can shove it up your ass, you lost and lonely, cynical jerk/‘Cause the sweetest, the deepest smell/The purest water from the well/Is true, true love.” There is something happy about this song’s sound, and in his delivery, and there is even a little laugh in his voice on the line “Loosen up your underwear.” The song also refers to Peter Stampfel. That’s followed by “Charlie Guitar,” a song about a musician, the lyrics coming at you like a story told by a folk poet who has been up for a few days. I dig that style of his delivery, and I love the line “Some look to flags ‘cause they can’t feel the wind blow.” That is one hell of a great line.

“Love Is Gonna Break The Fall” has a sweet folk vibe, capturing that excitement of love. It is a song that makes me happy, that lightens the load. I like these lines: “I want to be the one she choose/I’d gladly give her all I got to lose/Love is gonna break the fall.” Love and music are the things that will get us through these rough times. That’s followed by “Amazing.” My girlfriend thinks the word “amazing” is overused these days, and she might be right, but this song was apparently written in 1991, and composed for a couple on the day of their wedding. It tells both of a wedding in progress and his own wedding, the song feeling like a speech given at the reception. “Congratulations/And the best of luck/Now that everything is changed/And if you two don’t feel any different right now/Hey, that’s okay/You’re never alone.”

There have been a lot of good songs about the horrors of September 11, 2001, and each one seems to affect us in a slightly different way, while all tap into our memories and emotions of that day. The one on this album, “The Ballad Of Mary O’Connor,” was written by Mark Hollmann and Greg Kotis, the writers of Urinetown (a musical comedy that premiered earlier that year). The song was chosen as part of Brave New World – American Theatre Responds To 9/11, put on in Manhattan’s Town Hall. Rich Krueger performed the song, first cutting a demo of it to make sure those who were putting on the show liked his approach. It’s wonderful that the demo is included here, and on this track Rich Krueger is joined by Candy Girard on violin. “The fortieth floor ain’t no place for you, Mary/The air’s filled with paper/Ash chokes the skies.” That’s followed by “The One You Love,” a song that shows just what a good lyricist Rich Krueger is. Check out these line: “I’ve hardened my touch, I’ve pulled out the crutch/Excuse me if I fall too much/But I’ve stood trial already convicted/Of taking everything you had to lose.” What a great description of a troubled relationship. “We could stand and watch the next glaciers pass/Before either of us admits we’re wrong/If I could just remember what you saw in me/If I knew what the future used to be/But you just stay hurt and angry.”

I remember being excited about Heisenberg’s principle when I learned it in school, for it sort of had a freeing effect on my brain, as far as this need to know things. Since it is impossible to know the position and momentum of a particle simultaneously, I figured, hell, it’s probably impossible to know lots of stuff. It’s all about probability, not certainty. Uncertainty and entropy for me became the ruling forces in the universe. Anyway, in this song Rich Krueger uses that idea in relation to, well, relationships, and in the liner notes mentions how the film Bull Durham does a similar thing. “And the last great hopeless romantic/Steps to the blackboard and explains love/With quantum mechanics.” I also really like these lines: “Stand still one moment, you’re bound to lose your place/And everything that mattered will be/Out-of-date and scattered.” The last track listed on the CD case is “There’s A Wideness In God’s Mercy,” in which Rich Krueger puts Frederick William Faber’s hymn to music. It has been put to music by others before him, of course, by people like Lizzie S. Tourjée and Mary McDonald. But that isn’t actually the last track. There is one final short piece titled “Heaven,” a fun, kind of playful number that takes on energy as it goes before its sudden conclusion.

The Troth Sessions was released on August 28, 2020. I love the stripped down quality of the recording, though do wish that little pop at the beginning of some of the tracks had been cut. There is just one other thing I have to mention: in the liner notes, Rich Krueger says that Harold And Maude changed his life. That is my personal favorite film.

Posted by Michael Doherty at 9:57 AM