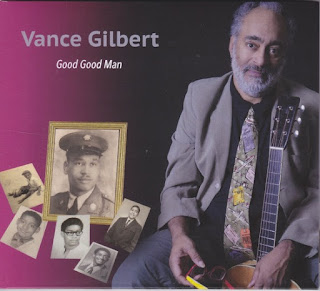 I consider myself extremely fortunate to have grown up at such a time and in such a place that I was able to see some of the best singer/songwriters as they were just starting out. Folks like Ellis Paul, Jim Infantino, Jon Svetkey, Dar Williams, Martin Sexton and Vance Gilbert all performed at small coffee shops, churches and book stores in the late 1980s and very early 1990s, often trying out new material at the open mic nights at the Old Vienna Kaffeehaus in Westborough, Massachusetts (a place I spent a good deal of time in my late teens). Vance Gilbert is someone whose talent was immediately recognizable, and his stage presence was like no other. The energy and the joy he brought to performing were so remarkable that you kind of fell in love with him even before realizing how damn good the material was. And the material has always been good, and continues to be. His new album, Good Good Man, features some excellent original songs. On this release, he has some talented musicians joining him, including Herb Gardner on trombone and piano, Tommy Malone on electric guitar, and – on one track – Chris Smither on guitar.

The joy of Vance’s live performances carries well to the studio performances on his new album, and the first line of the opening track, “Pie & Whiskey” made me laugh aloud: “You can live on pie and whiskey, but you surely won’t live too long.” There is a gentle and friendly quality to his voice, to his delivery, that draws you in, disarms you. This track has a full and warm sound, and he is joined by Craig Akin on bass, Brad Hatfield on keys, Tommy Malone on electric guitar, and Marco Giovino on drums. “You can sing yourself a lullaby/Like your mama sang to you.” That’s followed by the title track, though with some interesting punctuation. The album’s title has no punctuation, but the title track contains two commas, “Good, Good, Man.” The first comma is expected, but the second one certainly is not. I asked Vance about it, and he said: “It’s the musical Oxford comma. Keeps the title from sounding like some sort of sidewalk candy salesman in Barbados.” He then added, “Not that there’s anything wrong with that.” So there you go. Vance’s humor is well known. In fact, he opened for George Carlin in 2007. “Good, Good, Man” is a beautiful and soulful tune with a bit of a 1970s vibe, particularly with those smooth backing vocals provided by Joey Dalton, Esme Goldfinger and Deborah Dill. “And I’ve done things there’s no excuse for/Ain’t no way to turn back time/Busy trying to fix tomorrow/By leaving yesterday behind/Here you come confusing love and forgiveness.”

“Trust” begins with a groovy beat and some nice stuff by Stacey Wade on organ. Plus, it features a kind of cool, funky bass line by Craig Akin. And it has another delightfully humorous opening line: “Don’t trust your daughter if she calls your boss by his first name.” This track takes on a glorious and funky energy on the lines “What were you thinking?/You ought to know better by now.” And we get some nice touches by Herb Gardner on trombone, helping to make this track one of the highlights for me. “Don’t trust the jury if you dated numbers two, three and five.” Then “Cousin Shelly’s Station Wagon” is an interesting track, with Vance’s vocals supported mainly by Herb Gardner on piano, then with strings and harp by Brad Hatfield. The sound is so serious, which works in delightful contrast with some of the humor of the lyrics, sort of like some of Randy Newman’s best material (before he sold his soul to Disney). “Making love in that old Chevy/Parked on cousin Shelly’s lawn/Now you’re pretty well past fifty/And your tooth enamel’s gone/And I know I’ll never get this message through to you.” This song is sad and funny and absolutely wonderful.

“Zombie Pattycake” has a playful, fun, jazzy vibe, with a delicious bass line by Crag Akin and some wonderful work on trombone by Herb Gardner. But of course it is Vance’s vocal line that makes this track a total joy. “Once upon a time when you were dead/And, you know, just wandering around/Biting and eating everybody all over town/Not a lot of  brain function/At the old spinal cord junction.” Zombies are popular these days, and I think shows like The Walking Dead would be even more enjoyable if they used songs like this one and Jim Infantino’s “You’re Delicious.” I mean, come on, they are missing an obviously great opportunity here. “So if you ever wake up and find yourself dead/And you and your zombie friends are walking around, scratching your head.” There are some surprising touches toward the end, which are hilarious. Vance Gilbert then changes gears with the beautiful “Flyby,” with Vance joined only by Mike Posner on backing vocals. This is a completely engaging and unusual song, another of the disc’s highlights. “They see us in orbit, admiring our closeness/But what they don’t see is this space in between us/The millions of miles that defy diagnosis.”

“Another Great Day Above Ground” has more of a back porch, loose vibe, even including a false start to show this isn’t going to be an overly polished number. This track features Chris Smither on guitar, and it is a total delight, with a message that folks shouldn’t need to hear but do. “I show up to work each morning and do the best I can/ And treat others like I like to be treated myself.” Then suddenly in the second half Herb Gardner comes in on trombone. I love his work on this album. Every day is a great day to be alive. I mean, the alternative isn’t all that appealing. The opening lines of “Hitman” make me smile: “I’ll be eighty-three in August/I probably shouldn’t drive at night.” It’s a song told from the perspective of an aging hitman, and Vance gives us another powerful and moving vocal performance. Tommy Malone adds a beautiful layer to the song on electric guitar. That’s followed by “When I Cross Over,” with Herb Gardner joining Vance on piano. “My burning question/With Heaven’s perfection/Why can’t we have that right here on Earth?”

“Brunswick County” is a pretty song, and the vocal approach reminds me just a bit of Tim Buckley. Aine Minogue joins Vance on harp and backing vocals on this track, adding to the song’s beauty. That’s followed by the album’s sole cover, a really good rendition of Skylark’s “Wildflower,” a solo performance by Vance on guitar and vocals. It has an intimate sound, like Vance is playing this just for us in our living room. Here he shows us not only his vocal talent, but also his skill on guitar, and I prefer this version to the original. The album then closes with “The Day Before November,” which is delivered a cappella, as spoken word. As it opens, we hear the sounds of kids playing. It’s an excellent piece about childhood, and creates vivid images of the kids who populate the town, describing the scene and their lives in those moments. It takes place on Halloween, which they all agreed was the best day. “We were a hundred different hopes and dreams spray-painted on God’s wall/But the day before November was the best day of the fall.”

CD Track List
Good Good Man is scheduled to be released on January 24, 2020.
Posted by Michael Doherty at 9:28 PM