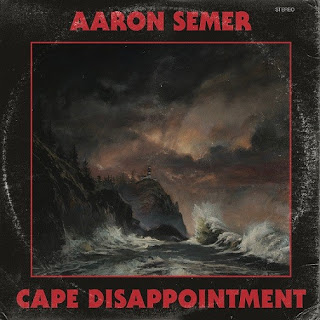 Another excruciating year of the Trump horror show is coming to a close, a year when we watched democracy strangled daily on television, when we kept thinking surely this will end soon. But the hideous monster just won’t die. Fortunately, we have a lot of great music to help us get through this darkness, and just hope there is something left of the country when we finally come out the other side. There have been a lot of excellent albums released this year, and one of the best records I’ve heard is Aaron Semer’s Cape Disappointment. This one feels like a perfect record for where we are in life, at least for me and the folks I know, as we see ourselves aging, take stock in who we are, and wonder just what went wrong with everyone. The material is all original, written by Aaron Semer, and the music is basically folk, but with elements of country, rock and punk. These are songs with something to say, songs that will speak to you and perhaps for you as well.

The record kicks off with one of its strongest tracks, “A God That’s All Ours.” Check out these lines, which open the song: “Another God awakens/A God of our own making/Of information and wires/A brand new network of stars/A God that’s all ours.” Oh yes, we see the worshipers everywhere, staring at their phones as they move like ghosts through what used to be there lives. These lines, which follow, really stand out for me: “Here we stand before you naked/Our flesh exposed and aching/And you see us for what we are/Just apes looking up at the stars.” For all our information, for all our advances, what are we really? I suspect we know very little, if anything. This song kicks in with a glorious power, and features a passionate vocal performance. Aaron Semer doesn’t hold back here. “At your feet we all bow/What awesome truths will you show us now?/What will our God allow?” And in the end, we are devoured by the machine, disappearing within its supremacy. This is a fantastic song, one of the best of the year. By the way, Aaron plays guitar and drums on this track, and is joined by Michael Wohl on electric guitar. “A God That’s All Ours” is followed by “Bones For The Catacombs,” which has a brighter, more playful vibe right from the start, providing a way out from under the weight of our own introspection caused by the first song. This one features Gus Clark on accordion, and is a love song of sorts. “She asked him what he did; he said, ‘I push bone wagons for a living/And I shouldn’t be talking to a rich girl, please forgive me’/She said, ‘Hey, sooner or later we all end up alone/Because we’re all just bones for the catacombs.’” This one addresses the larger concern of our mortality. But why not dance while contemplating our own inevitable demise? My friend Jason recently went into catacombs below a church to look at a collection of skulls and other bones housed there. It’s kind of morbid, certainly, but also helps put things into some sort of perspective. Right? Life is so damn short. Travis Curry is on drums, and Colin J. Nelson is on percussion.

“Settle In” has a sweeter vibe, and is both a relationship song and a song about identity. “Sometimes it feels like I didn’t choose this life/It feels like this life chose me instead/I’m just doing what my grandfather and my dad did/Hell, I guess it ain’t that bad.” There is something beautiful about this song, and the line “It took us many years to find one another” really hits home for me. My girlfriend sometimes says she wishes we could have met when we were younger, but I am just grateful to have her in my life now. I also really like the lines “But I know when my ship is coming in/That you’ll be waiting there for me,” for – as the main character is a fisherman – it is both literal and metaphorical. This is one of my favorite tracks. It is followed by “The Clothes Of A Dead Man,” which comes on strong. “But now he’s a dead man/And it feels like his eyes/Are watching everything now/From the skies.”  The idea of being watched by loved ones who have died is something I have always found unsettling rather than comforting, perhaps because I value privacy and don’t want anyone spying on me, living or dead. “And it feels like his arms/Are reaching down to help/But you’re all alone.” This track features some nice work by Kevin Bean on harmonica. The first side of the record then concludes with “Risingsun, OH,” which has a more intimate folk vibe. It tells the story of a woman and a small village (and, yes, Risingsun is a real place in Ohio). “Talk about a town with one stoplight/You can drive right through it in the middle of the night/And not even know that you had been in Risingsun.” The town where I grew up still has just one traffic light. It could have used two more, but instead someone had the bright idea of putting in two rotaries instead.

The second side opens with “We All Dance Together With The Band,” which has a sweet, gentle, familiar folk sound on guitar to start. I really like those touches on piano by Charles Wicklander. It’s a song about seeing local musicians cover tunes they all know and love. The line “Well, they’re not the best” makes me laugh every time. The song then kicks in, and in the next verse, the scope of the song is expanded to places across the globe: “Everybody’s got a little place to go/Where the lights are dim/And everybody sways/And we can dance our troubles away.” Ah yes, that’s what we need. Another couple of lines that stand out for me are “Let’s forget our pains/And all our plans.” What I love is that he adds “plans” to “pains,” that it is not just about dismissing our troubles for a time, but also letting go of the future, our hopes, to live in the moment. Seeing live music can certainly help us do just exactly that. Again, life is so short. This is a beautiful song. Its main line does remind me of that Who song, “Join Together.”

Then “(Little Black Square On My) Profile Pic” bursts in, another of this record’s most powerful songs, with an energy that is nearly palpable. We are facing dire environmental and political troubles, but what do most of us do about them? Nothing. And that’s what this song is about, the idea that engaging in symbolic protests on social media would have some effect, when of course it does nothing other than give you the illusion that you are involved. Hell, I’m guilty too, of doing so little when what I want to do is storm the White House, drag that lying sack of garbage out and kick the living crap out of him (then do the same to Mitch McConnell, Lindsey Graham, Devin Nunes and all the other greedy scoundrels out to destroy democracy). What would it take for us to get off our asses and actually do something? I wish I could play this song for the entire Facebook community. “I don’t want anybody to think that I’m a prick/I’ll put a little black square on my profile pic.” I wasn’t sure exactly what he was referring to regarding the black square, and had to look it up online. Admittedly, I try to ignore all trends on social media. Anyway, apparently the black square was used to protest the results of the 2016 presidential election. Then at one point, women covered their profile pictures with black squares in an effort to show men what the world would be like without them. Both of these things are silly and pointless and accomplished nothing. By the way, Aaron Semer delivers a great lead on kazoo on this track.

“Ball And Chain” is song that addresses going into debt to pay for college, offered in the delicious style of those classic country folk numbers. There is a verse about paying rent, and how it feels like throwing money away. Oh yes, I can relate to that. And rents are increasing all the time here in L.A., contributing to a serious homelessness problem. Kevin Beans delivers some wonderful stuff on harmonica. That’s followed by “I Hope My Johnny Comes Rolling Home.” As it begins, Aaron mentions “that useless war,” and soon we learn the war he is referring to is the war in Afghanistan after the horrors of September 11, 2001. This one kicks in to become a country rock song, with a chance to sing along. “The world was convinced we had to take out Sadam (I hope my Johnny comes rolling home)/So they moved his whole unit to the desert land (I hope my Johnny comes rolling home)/They wasted all the cities, they wasted every man (I hope my Johnny comes rolling home)/They took out all the leaders but they didn’t have a plan.” And there is a bite to lines like “Took out Gaddafi and we did it with pleasure.” The album then concludes with “The Time We Used To Kill,” which has an intimate folk sound, just vocals and acoustic guitar, no one joining Aaron on this one. “Moved into a van with a bed in the back/Packed it up full of drugs, whiskey, and Kerouac/Hit the road and said we’re never comin’ back.” I can’t help but still find something appealing about that. There is some humor in lines like “Well, if you’ll forgive me for being dismissive of your worldview/Then I’ll forgive you for tryin’ to kill me in the Black Hills.” The line “And nine months later our love turned into hate” surprised me. At the end, Aaron repeats “I used to think life would go on day after day.” Maybe it’s because I’m getting older, but that line really hit me.

Cape Disappointment was released on November 15, 2019 through Pastures Of Plenty, and is available on both vinyl and CD.
Posted by Michael Doherty at 1:51 PM