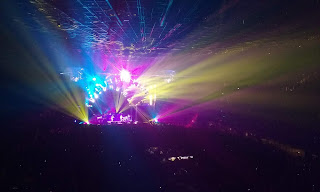 Dead And Company wrapped up their two-night stand at the Forum here in Los Angeles last night, the first part of the band’s four-show New Year’s run. And it was a good one. Considering the price of concert tickets these days, all shows had better be good ones. My ticket was $121.80, including all those damn fees, and we were by no means close to the stage. In fact, we were pretty far from the stage, though still with a good view, you know, if you squinted. But a Dead show was always about just being in the room. The vibes are as good in the back – or even in the hallways – as they are up front. As long as you can hear the music, have some room to dance, and can glance at the band now and then, just to check in, you were fine, all was well. And that’s how it is still, basically. We arrived at the venue a little after 6 p.m., and were able to walk right in, no line at that time at that entrance. My friend Jon bought a beer and a bottle of water, and tried the cap he’d brought, but it wouldn’t fit. For some reason at this venue, if you purchase water, they remove the cap before handing it to you. It’s weird and obnoxious. So we brought our own bottle caps in. The one Jon brought, however, didn’t fit. I had brought two different-sized bottle caps, and the second one – which came from a two liter bottle of cream soda – fit perfectly. Now no worries of spills, at least not from our bottles. We had some time to relax before the show. The concert was scheduled to start at 7 p.m., but the chances of it beginning before, say, 7:15 were nil.

At 7:29 p.m., the band took the stage, and during a bit of tuning, Jon and I – as well as those around us – made our guesses as to what song they’d open with. I said, “Bertha.” Jon said, “Shakedown.” The band said, “Viola Lee Blues.” I was excited to hear this song, which featured some groovy jamming. After a while, the groove started to break down a bit, went in some interesting directions, then suddenly bam, the song took off like a shot, speeding up, racing along. But the boys still kept a tight grip on the reins, not letting things get too far out yet, as it was only the first song. They didn’t finish “Viola Lee Blues,” leaving off the “letter” verse, and went right into “Bertha.” I was happy to hear it, though it still seems strange to me that they ease out of the “Anymore” refrain now, rather than delivering the song’s final rousing punch. But anyway, that led right back into “Viola Lee Blues.” A man handed a woman a glowing water below me, and the band was cooking along. But they didn’t finish the song this time either, instead just jamming on it. And then Bob signaled the others and they veered into… what? …a little tease of “Dark Star”? What they went into was “Jack Straw,” though with a bit of an awkward start. It wasn’t a very exciting rendition, not at first, with some uninspired jamming. But then they took us into beautiful territory, where the eagles filled the sky, and everything seemed to be working well. That was followed by “Big Boss Man,” the stage bathed in an orange light. A warning? Are we reading too much into the color orange these days? This tune featured a lively, cool lead on keys from Jeff Chimenti, and the band eased out with a little vocal jam. Then came “Friend Of The Devil,” delivered at an interesting tempo. It was slower than the fast studio version, but faster than the slow live versions the Dead did in the 1980s and 1990s. Bob sang that extra verse, and the song ended there. That was followed by “West L.A. Fadeaway,” which had a good slow mean groove, a groove that could mesmerize, hypnotize you. Yes, my mind wandered a bit. “Lost Sailor” came as a surprise, and this version was kind of pretty. Ah yes, “drifting and dreaming.” Of course, that led into “Saint Of Circumstance,” which was a whole lot of fun when it kicked in. “This must be heaven.” We always thought so. Well, almost always. Things went a bit weird there at the end, off into some slightly spacey territory, but then back for the “Sure don’t know what I’m going for” part. I thought for a moment that they might then go back into “Viola Lee Blues,” but as “Saint” was wrapping up, it was clear that was the set closer. The first set ended at 8:47 p.m., with “Viola Lee” still unfinished.

During the set break, the topic of conversation, as usual, turned to predictions of second set opener. However, knowing there is a prepared set list somewhere takes a little of the excitement from the game. I mean, several people knew already. Those folks at the sound booth, for example. You needed binoculars, not ESP, to figure out the set opener. Meanwhile, there was an inch of water (I hope it was water) at our feet, the results of a spill from behind us, we assumed. We managed to get the attention of the security folks, and I alerted them of the situation, and asked them to radio someone for a roll of paper towels so we could soak it up. Five minutes later one of the guys returned and handed me two paper towels. “Will that do it, or do you need more?” he asked. “I need an entire roll,” I repeated. He said he’d fetch the janitor. Then quite some time passed, and a few other employees asked us about the liquid and its status. It seemed to be taking way too many people to figure out how to get us a roll of paper towels. The guy who gave us the two came back to tell us that the bartender refused to give him more. Weird. Well, at 9:31 p.m., the lights went out, signaling the start of the second set, so that was that, we’d stand in water.

And what song did they choose to open the second set? “Viola Lee Blues.” They immediately went right to the “I mailed a letter in the air” verse – no jamming or anything. And within a couple of seconds of finishing that verse, the music exploded and the band moved into “China Cat Sunflower.” At that point, the janitor showed up with some thicker paper towels. At first, he wanted to give us only one, clearly not fully cognizant of the problem. I had to keep asking for more. He handed them to us one at a time. I kept saying, “Give us the whole stack, we are standing in a pond.” But the stingy bastard was incredibly reluctant to part with them. Were they his personal towels? Had he brought them from home? What’s the story there? And, you know, could this spill possibly be the result of them taking the goddamn caps off of the water bottles? He handed us four or five towels, and then walked away. We spread those few towels out the best we could and then focused our attention back where it belonged – the music. Because things were starting to cook now. The “China Cat” jam was a highlight of the show, taking off and pushing through, and eventually leading to “I Know You Rider.” This entire section was fantastic, and my wet shoes were dancing. That led to “Dark Star,” with a nice long jam before any vocals, as if the band were playing the song all the way through first as an instrumental to see how it would go. Well, it went extremely well, and the floor was in purple and green, my two favorite colors. The band tamed the beast, and now was making it do a few tricks, and once they had it there at their feet, they went into the first verse, the ceiling twinkling above. The jam after the first verse went in another direction, thumping and driving and pushing us through some barrier, or at least right up against it. Do we burst through this wall, or just melt into it? Or climb it? Or create a door? What’s behind the vibrating door? Giggling spiders and inquisitive electric rhinos. But we all found our way back, in time for Bob to sing the second verse. He held onto that “Lady in velvet,” stretching her out to incredible proportions. Where to next? Ah, “He’s Gone.” “Nothing left to do but smile, smile, smile,” and the sun beamed at us from above the stage, covering us in glorious yellow. That jam eased us into “Drums,” to a land half electronic, half organic. The drummers faced away from us, as if playing to the creatures of light dancing above at the back of the stage, like leading us in a ceremony. But it was not long before Mickey coaxed a new dawn, a new world from the ether, drawing the others back out for “Space.” They picked notes from the lights to help us through the forest.

And then? “Althea.” It was an odd choice to lead us out of “Space,” but there we were, and a damn good jam came from it, with some delicious work by Jeff on keys. It ended up being a really good “Althea.” Then suddenly, boom, we were into “Morning Dew,” which began with an explosion, the end of the world, you understand. Who knew there’d be this great beauty after the end? “Morning Dew” took us to some glorious heights, resplendent and pulsing. For a moment, I thought the set would end there, but Bob led the band into “One More Saturday Night.” That’s right, Bob, it’s Saturday night. I’ve never been excited to hear this one, but last night it featured some good stuff from Jeff, and of course there was a nice spark there toward the end. There was actually a false ending to the song, and the band kept it going. Unnecessary, but kind of fun. The second set ended at 11 p.m. And at 11:01 p.m., they were back on stage for the encore, “The Weight.” Both Oteil and Jeff received a whole lot of love from the crowd when they started their verses. Then, interestingly, the song went into a really cool vocal jam at the end, which was wonderful. The band took bows at the edge of the stage, and that was the night. The show ended at 11:11 p.m.


The Forum is located at 3900 W. Manchester Blvd. in Inglewood, California.
Posted by Michael Doherty at 8:06 PM