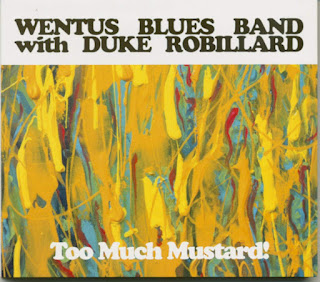 Hey, we all know the blues are not limited to the United States, but it is still surprising to me that Wentus Blues Band is based in Finland. If you’d said they were from Chicago, I’d say sure. If you told me they were from somewhere down south, I’d say okay. But the blues are universal, and this band delivers some great tunes on their new album, Too Much Mustard! This album is a joint effort with guitarist Duke Robillard, who is based here in the U.S. You probably know him from his work with Roomful Of Blues and The Fabulous Thunderbirds, but he also has a solid solo career. This album features a good mix of covers and original material, some composed by members of Wentus Blues Band and some by Duke Robillard. The Wentus Blues Band is made up of Juho Kinaret on vocals and percussion, Robban Hagnäs on bass, Niko Riippa on electric guitar, Daniel Hjerppe on drums and percussion, and Pekka Gröhn on keys. By the way, Duke Robillard offers his personal thoughts about the band in the disc’s liner notes.

The album gets off to a hopping start with a cover of The Holmes Brothers’ “Stayed At The Party.” This song itself sounds like a party, though its opening line is “Well, I stayed at the party a little too long.” If this is a song of regret, then regret never sounded so good. Check out that work on keys! The band then changes gears with a cover of Tom Waits’ “2:19,” which has a cool bluesy groove. The vocals have something of that raw, rough quality that Tom Waits possesses. I dig that lead on guitar, and then there is another nice lead on keys. They follow that with Robert Johnson’s “If I Had Possession Over Judgement Day,” here titled simply “Judgement Day.” This a fun rendition, with a full, rowdy sound and a good, mean groove. These guys pick some excellent material to cover. The best songwriter who ever existed is of course Leonard Cohen, and I am always excited to hear folks cover his material. The song that Wentus Blues Band performs here is “First We Take Manhattan,” from his 1988 album, I’m Your Man. Wentus Blues Band and Duke Robillard offer an interesting rendition of this one, adding some blues guitar, as you might expect, but also giving it a somewhat lighter, more relaxed vibe than the original.

We then get into the original material, beginning with “She’s A Killer Hot Blonde,” a rocking, jumping song about a woman who loves the blues. “She’ll make you dance to the rhythm, holler and scream/She will make you see how she fulfills her dreams.” It was written by Robert Hagnäs. And if you’re looking for something with that delicious classic blues sound, these guys offer “Right In Your Arms,” another original tune. There is a whole lot of great playing on this track. This one should succeed at making you feel good. It is certainly working for me. “I’ve found what I’ve been searching for/Because the place I love the best is wherever you are/Right in your arms/That’s right, baby.” Indeed! That’s followed by “Too Much Mustard,” the album’s title track, which is another seriously enjoyable and lively number, with a bit of a classic rock and roll vibe. This is a tune to get you on that dance floor and is guaranteed to put a smile on your face (especially during those brief vocal parts). Swing your partner around and realize that life is pretty damn good. Yeah, this is one of my favorite tracks. It was written by Duke Robillard, Robert Hagnäs and Niko Riippa

The band delivers a good rendition of “I Hear You Knockin’,” a fun track about leaving and not coming back. “I hear you knocking/I hear you calling/I hear you every time you say my name.” It features another good groove and more great stuff on guitar. “You Got My Love” is an original song, one that quickly establishes a good groove and maintains it, something to keep your body moving. Yeah, this disc features a lot of fun material, including a rousing cover of Chuck Willis’ “I Feel So Bad,” here titled “Feels So Bad.”  “I tell you I feel so bad/I feel like a ball game on a rainy day/Since I lost my baby/I shake my head and I walk away.” That’s followed by “Where Have All The Songbirds Gone,” which has a sweeter, prettier sound with some nice vocal work. You might just float along on this appealing sound, but pay attention to the lyrics. Lines like “You’ve got to tell me, tell me why/There’s no help from the sky” and “Look, all the leaves turning rotten/Soon we are gonna hit bottom” stand out. The disc then concludes with “Passionate Kiss,” a song written by Duke Robillard, and one he recorded himself earlier, including it on The Duke Robillard Band album Turn It Around. This new version features some nice stuff on keys, and has a more delicate, moving sound at the beginning, then builds from there.

CD Track List
Too Much Mustard! was released on September 13, 2019.
Posted by Michael Doherty at 2:31 PM