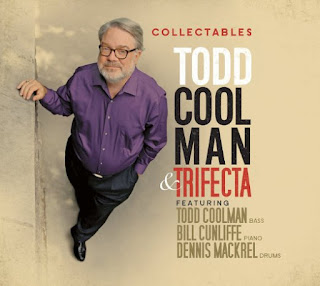 I was drawn to the new CD from Todd Coolman & Trifecta partly because of its title, Collectables. I am a collector. I’ve tried to deny this sometimes infuriating attribute of mine, but it’s no use. These days I collect CDs and records, DVDs and Shakespeare books. In the past I’ve collected baseball cards, Star Wars toys, Star Trek toys, rocks, coins and Red Sox memorabilia. (I’ve since divested myself of most of those items.) I also collect memories, writing and keeping set lists from concerts I’ve attended, as well as saving concert ticket stubs. These days a lot of folks don’t collect music the way I do. The physical item is still important to me, be it a CD or record. Having a physical connection to the music adds considerably to my enjoyment for some reason.

Anyway, I’m happy to add Todd Coolman & Trifecta’s Collectables to my collection. It, as you might guess, features some great leads on bass by Todd Coolman (as on “Funkallero”). And joining the jazz bassist are Bill Cunliffe on piano (you might have heard Bill Cunliffe’s work on recent releases by Lyn Stanley and Laura Perlman) and Dennis Mackrel on drums. This CD features mostly covers, but also a few originals (one written by Todd Coolman, one by Dennis Mackrel, and one by Bill Cunliffe). These tracks were recorded in July of 2015 at Skidmore College (where, incidentally, I briefly attended classes some time ago).

Todd Coolman & Trifecta kick off this CD with “New Rhumba,” a fun, high-energy tune written by Ahmad Jamal. This is one to get you tapping your toes, and it features some wonderful work on piano by Bill Cunliffe. This is one of my personal favorites. It’s followed by a mellower number, “We’ll Be Together Again,” written by Carl Fischer (this version obviously without the lyrics by Frankie Laine). This version has a more pronounced groove than I’ve heard in other renditions, and includes a good lead section on bass. The arrangement is by Bill Cunliffe.

I really like the version of Victor Feldman’s “Joshua” on this CD. It certainly doesn’t hurt that it includes two drum solos (definitely part of what makes this one of my favorite tracks). This is a tune that was first included on Miles Davis’ Seven Steps To Heaven (Miles also included it on his live album Four & More), and has been recorded by several artists in the years since then. The version here keeps moving, with all three musicians shining. That track is followed by Dennis Mackrel’s “With All My Love,” one of the CD’s originals (though written earlier). It has a mellow, Latin vibe.

“Jimmy Up, Jimmy Down” features a wonderful bass solo, as well as a drum solo, and a great swinging feel throughout. This tune was written by Renee Rosnes. And I love what this trio does with Harry Warren’s “Summer Night,” giving it a great energy (this track too has both a bass and drum solo). They then deliver a sweet rendition of the Gershwin tune “Isn’t It A Pity?” with Bill Cunliffe leading on piano.

Another highlight of this disc is “You’re My Everything,” written by Harry Warren. This is a very cool track, with some wonderful playing and a naturally delicious vibe. It is followed by “Out Of The Darkness,” an original composition by Todd Coolman, which a nice, relaxed, positive feel. The album concludes with another original composition, “Flatbush,” written by Bill Cunliffe, featuring a good lead on bass by Todd Coolman. I also like the rather unusual drum solo by Dennis Mackrel toward the end of the track.

CD Track List
Collectables is scheduled to be released May 20, 2016 through Sunnyside. The CD-release concerts are planned for May 25 and May 26, 2016 at Smoke in New York City.

PS: Speaking of collectables, I’d like to start a collection of furs. If anyone has one he or she would like to donate, I would certainly not be opposed to taking it off your hands.
Posted by Michael Doherty at 3:07 PM