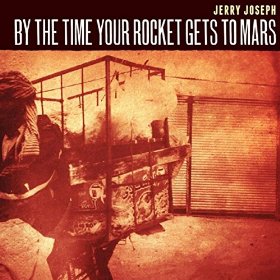 Singer and songwriter Jerry Joseph is having a pretty decent career. He’s put out quite a large number of albums, under his name as well as with The Jackmormons and Stockholm Syndrome. A lot of his songs, including “Climb To Safety,” “North” and “Second Skin,” have been performed by Widespread Panic. Last year he was inducted into the Oregon Music Hall of Fame. And he seems to be constantly on tour. His new CD, By The Time Your Rocket Gets To Mars, features all original music, written or co-written by Jerry Joseph. These songs were begun while Jerry Joseph was teaching music in Afghanistan. He has excellent musicians backing him, folks like Mookie Siegel on keys, Jeff Crosby on guitar, Jason Crosby on keys, Steve Drizos on drums and Steven James Wright on bass. Steve Kimock (a founding member of Zero) joins him on one track.

The album opens with “Cosmic,” a rock song that begins slowly and builds to something quite good, a song about our connection to everything past and present and future, with the resulting message that you are not alone. “Interstellar music of the spheres/Running through your bones today/You are not alone today.” It ends on a very positive note, and is followed by “Giraffe,” which begins with drums, a good groove. This song really caught me by surprise. The line, “You said, ‘Quit your complaining, boy, become a giraffe’” made me laugh the first time I put this disc on, and made me pay more attention (I had been trying to take care of some things round my apartment while listening). This is an excellent song, one of my favorites, and it features Sikiru Adepoju on talking drum. You might know Sikiru Adepoju from his work with Mickey Hart. I got to see him perform with the Grateful Dead a couple of times in Oakland during the “Drums” segment.

Another of my favorites is “Supernatural.” It has a kind of easygoing groove, which I really like, with the vibe of a love song. There is a great emotional delivery to the vocals, particularly on the chorus, which is one of the things that make this track a highlight. That is followed by “Mars,” the song that gives the album its title, a title which I love, by the way. I thought it was a great title even before I learned its origin. But after reading how Jerry Joseph got the title, I appreciate it even more. His five-year-old son said he wanted to travel to Mars, and Jerry expressed some reluctance to see him go. His son then said, “You’ll be in heaven a long time before I get to Mars.” And that led to lyrics like, “And I’ll be long gone to heaven/By the time your rocket gets to Mars/Yeah, I’ll be circling in heaven/While you’re up there circling the stars to Mars.” This is the track that features Steve Kimock on square neck guitar.

“Run To Me” is for me another highlight, in large part because of its lyrics. This song’s opening lines grabbed me: “This isn’t the first time I’ve been told I was to blame/Everybody’s got a demon, at least yours has got a name.” Not bad, eh? I also like the feel of this song, and there is some nice work on guitar and keys during the instrumental section partway through. And check out these lines: “Somewhere on the left bank you told me to choose/But you decided for me, I see you wore your running shoes/Well, I don’t want to be the monster that makes you run away/I want to be the one you run to when you need to feel okay.” Then “One World At A Time” has a really good energy. Steven James Wright is on slide guitar, and Scott Law joins Jerry Joseph on guitar on that track.

The album concludes with “Fog Of War,” a sixteen-minute tune (hey, it’s almost exactly the length of the album version of “Terrapin Station”) that was also included on Jerry Joseph’s previous release, Istanbul/Fog Of War (it seems to be the same version). Scott Law plays guitar on this track, and Michael Lewis provides some vocals. It’s a good, bluesy jam, with lots of great work on guitar. “You say our love is an open door/You say our love is blind/But we stumble around in a fog of war tonight.”

CD Track List
By The Time Your Rocket Gets To Mars is scheduled to be released on April 15, 2016 through Cosmo Sex School.
Posted by Michael Doherty at 3:45 PM