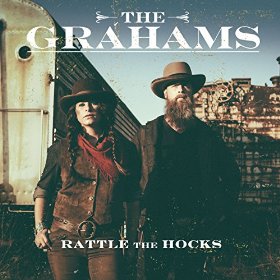 Last year The Grahams released their absolutely excellent Glory Bound CD. At the same time, a recording of live tracks was released. Titled Rattle The Hocks, it mostly features songs from Glory Bound, but also a few other tunes, including a cover of “City Of New Orleans.” There is also a short documentary film titled Rattle The Hocks, about The Grahams’ 2014 cross-country train trip during which the songs that would end up on Glory Bound really came together. The film was made by Cody Dickinson, and it includes footage of The Grahams recording a version of “Mama” at Sun Studio and singing “The City Of New Orleans” on the train. This album then is basically the soundtrack to that documentary. The tracks are recorded live, but these are not concert performances. The recordings are clear and the tunes are wonderful, making this a great companion piece to Glory Bound (a deluxe edition of which was just released).

It opens with “Griggstown,” a delicious, energetic country tune driven by Alyssa Graham’s vocals. The line that always sticks out for me is “I might have been your girl once, but you’re never going to be my man.” That’s followed by a really good rendition of “Gambling Girl,” the guitar making me think at times of some of that great early 1970s Rolling Stones country rock material.  And “Glory Bound” is a song I just can’t get enough of. I love these lines: “Wish I never spent a dime on menthol cigarettes/Wish I hadn’t written my rebellion on my lung.” This song, of course, takes its inspiration from Woody Guthrie and the trains, an important component of the album of the same name and of the documentary film.

“Tender Annabelle” is the first song on this CD to not have been included on Glory Bound, though a version of it is included on the new deluxe edition of that album. The version here has a good vibe and features some nice work on keys, as well as some playful moments by Alyssa on vocals. And this rendition of “Kansas City” is a whole hell of a lot of fun, the delightful addition of horns giving it a much different feel from the original version.

The version of “Mama” here is the one recorded at Sun Studio, and includes a very brief introduction (there is a bit more to it which you can see in the documentary). There is also just a bit of banter at the end of the track. I also really like this version of “Blow Wind Blow,” one of the most powerful tracks from Glory Bound. This is such a great song, and I love the guitars here.

Rattle The Hocks concludes with two songs not from Glory Bound. First they take “City Of New Orleans” and give it more of a New Orleans jazz flavor with horns and with the rhythm, which works wonderfully. It’s a joyful rendition. This song was written by Steve Goodman, but made famous by Arlo Guthrie. There is a bit of banter at the end. (I do wish the other version from the film was included also, the one that Doug and Alyssa sang on the train itself.) And then they do a rendition of “Big John” performed a cappella with several guest singers.

Track List
Rattle The Hocks was released digitally on May 19, 2015, at the same time as the original edition of Glory Bound.
Posted by Michael Doherty at 5:30 PM