Nick Ferrio: “Amongst The Coyotes And Birdsongs” (2015) CD Review 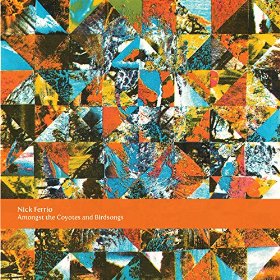 I know I’ve said this a lot lately, but much of today’s best music seems to be coming out of Canada. Another fine example of this is Nick Ferrio’s new album, Amongst The Coyotes And Birdsongs, which features strong and moving original material in the folk realm. Several guest vocalists join him, helping to give each song a more distinct feel. There are no weak tracks here, and two of the tracks – “Come Hell Or High Water” and “Mirrorball Shine” – are among my favorite songs of the year.

It opens with “Hide My Love,” which features Tamara Lindeman (from The Weather Station) joining him on vocals, and Matt Monoogian on pedal steel. “If I only knew how to/I would give myself to you wholehearted/Don’t want to hide my love.” There is almost kind of a pop feel to this song, particularly in the chorus, and its brighter vibe matches the excitement and nervousness the characters of this song feel. Tarama Lindeman also joins Nick Ferrio on vocals for the following track, “Fall In Love,” a mellower and pretty song.

One of my personal favorites is “Come Hell Or High Water,” which has more of a country vibe, and features Sylvie Smith on vocals (you might know her from Evening Hymns and The Magic). There is something so positive about this song, and I just love the whole feel of it. “I’ve been waiting so long/For you to come along/I’ve been waiting so long/To say, to say/Come hell or high water.” It’s a wonderful song, and I’ve been listening to it over and over. And yet, as good as this song is, I think “Mirrorball Shine” is even better. There is something timeless about this folk song – the sound, the subject, the approach. This is one of those songs that feels like it could eventually (or soon) become a traditional tune. Julie Doiron joins Nick on this track, and I love her vocals. Here is a taste of the lyrics: “Daughter, daughter, I won’t say this twice/If you’re thinking of him, you don’t need my advice/You don’t need my advice/Keep him with you beneath your sleepy lids/If he’s in your thoughts when you awake/Then your love is his/Then your love is his.”  You might find yourself singing along. It’s a song you want to commit to memory to have at the ready to sing yourself. Matt Monoogian plays pedal steel on this track.

Am I mad, or does “Wrecking Ball” remind you a bit of The Beatles’ “Don’t Let Me Down”? Maybe it’s just me. “Once I thought I had a true love/Stood like a tower tall/Thought nothing could shake it/Nothing could make it fall.” Tamara Lindeman joins him on vocals on this track, as well as on the following track, “Amongst The Coyotes And Birdsongs.” The CD’s title track has a lighter, happier feel (though the lyrics sometimes work wonderfully against that – “And now when we pass on a busy street/We walk right by like a couple of strangers/With no hellos, and no goodbyes/Just a certain sadness somewhere in our eyes”), and a catchy guitar part that I can’t help but love. Gavin Gardiner also provides vocals on this one. I should mention that Gardiner co-produced the album with Nick Ferrio, and also recorded and mixed it. He also plays bass on several tracks. (You might know Gavin from The Wooden Sky.) “Amongst The Coyotes And Birdsongs” is another of this album’s highlights. It features Matt Monoogian on pedal steel.

The only cover on this release is “Hang Man,” a traditional song that is also known as “The Gallows Tree” and “The Maid Freed From The Gallows.” Led Zeppelin recorded it as “Gallows Pole,” as did Neil Young, and The Watersons recorded it as “The Prickle Holly Bush.” On the back of this Nick Ferrio CD case and on the CD itself, it is listed as “Hangman,” but inside it’s listed as “Hang Man.” Julie Doiron joins Nick on vocals on this track.

CD Track List
Amongst The Coyotes And Birdsongs was released on CD on May 26, 2015 through Headless Owl and Shuffling Feet. This album was also released on vinyl and on cassette (yes, that’s right, cassette).
Posted by Michael Doherty at 10:59 AM