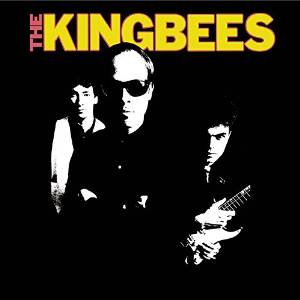 The self-titled album from The Kingbees is some classic rock and roll, not from the 1950s but rather from 1980. But don’t worry, this is the real thing. It’s not a put-on; it’s not a costume this band dons for an hour or two and a few dollars. Clearly the band was living it, breathing it. This is no-frills rock by a classic rock trio – guitar, bass and drums. And they clearly needed nothing else. This special re-issue includes eight bonus tracks, demos and live recordings, all of which were previously unreleased. It also contains new liner notes by lead singer/guitarist Jamie James, in which he offers some interesting information on the band’s conception and formation. The original idea was to do a Buddy Holly tribute band, and you can certainly hear lead singer Jamie James’ affection for Holly on a song like “Ting-A-Ling.” Also, among this disc’s bonus tracks is a live cover of Holly’s “Not Fade Away.”

The Kingbees kick off the album with “Sweet Sweet Girl To Me,” a fun tune with a bit of a rockabilly flavor, and backing vocals repeating, “Sweet, sweet.” It’s a look back at a girl who left him, but he seems to have nothing but fondness for her, which is certainly unusual. “Well, I can’t talk about her, ‘cause she’s with someone new/As long as she was with me, she was true true true.” It’s followed by “My Mistake,” which has a groove you can sink your teeth into. I love the way the bass plays such a prominent role. And I also like the sense of humor about it, as in these lines: “I saw a real fine girl at the marketplace/She had a nice way of walking and real fine face/A voice like a man, I don’t understand/I’m sorry, chick, but it’s my mistake.” I like this track a lot.

“Man Made For Love” begins with a slow (and therefore kind of surprising) and even sweet introduction. “My arms are made for hugging/And my lips are made for kissing you.” Then once it kicks in it has a Bo Diddley kind of vibe (think a fast “Who Do You Love” kind of thing). “Fast Girls” has a bit of a punk vibe about it, which I love. The punk edge makes sense, as both types of music were a sort of reaction to the excesses of some mainstream music and a return to a more stripped down, simple, immediate sound. Plus, it has the respectable punk rock song length of two minutes. And I love the ending – it has a very familiar classic rock and roll ending, but then eliminates that final chord, so you’re left hanging there, waiting for it, hearing it in your head. It’s like a bit of a tease.

“Once Is Not Enough” is a great, fast-paced rock and roll number with a lot of energy, and a beat to get you dancing. “Well, give me, give me all you got/I’m in love and my blood’s red hot/Give me, give me all you got/You got me started and I just can’t stop.” This is one of my personal favorite tracks. But my absolute favorite is “Everybody’s Gone,” the original album’s closing track. It a rock and roll love letter to rock and roll, and is a whole lot of fun. It’s about dancing all night long, and it should get you dancing. “I don’t care if it’s getting too late/I can’t leave this rock and roll/I’ll never leave this rock and roll.” There is some really nice work on guitar, and little nod to “Wild Thing” (“Come on baby, you move me”). And then, hurrah, this track gives us a drum solo, and follows that with a seriously cool bass solo. I love this track.

This special re-issue includes eight bonus tracks, all of which were previously unreleased. The first five are early demos, including “My Mistake,” “Man Made For Love,” “Ting-A-Ling” and “Fast Girls” from the first album, and “Burnin’ The Town Tonight,” a song which was included on their second record. I actually prefer this version of “Man Made For Love,” especially the intro, because the bass has more presence. The demo version of “Fast Girls” has a different ending, with a false fade, and then a real fade-out. I definitely prefer the album version for that reason.

The other three bonus tracks are live recordings from a show the band performed in Detroit on June 8, 1980. Interestingly, all three are covers. The first, “Somethin’ Else,” puts me in such a good mood each time I listen to it. This song actually had me laughing aloud the first time I listened to this disc, specifically these lines (and the way they are delivered): “To own a car would be a luxury/But right now I can't afford the gas/A brand new convertible is out of my class/But that can't stop me from thinking to myself/That car's fine looking, man, it's somethin’ else.” “Somethin’ Else” was written by Eddie Cochran and Sharon Sheeley. That’s followed by a very cool rendition of Buddy Holly’s classic number, “Not Fade Away.” The CD then concludes with a really good cover of “Bo Diddley,” with that famous rhythm. They ask the audience to sing along at one point, then tease them, “Oh you’d have never got a recording contract singing like that, cats.”


This special re-issue of The Kingbees was released on April 28, 2015 through Omnivore Recordings.
Posted by Michael Doherty at 9:10 PM