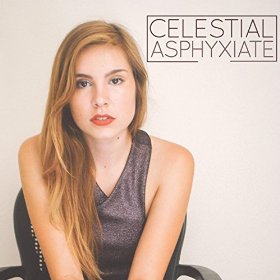 Celestial is the project of pop vocalist and pianist Celeste Tauchar, a young talent (only twenty years old) who was born in Germany, raised in California and currently residing in Florida. Asphyxiate is the debut EP from this young artist, containing four tracks, each of which is also being released as a single on her web site and Soundcloud. The first two tracks are currently available.

The first, “Tidal Wave,” begins with a strong rhythm on keys, the other instruments soon adding to that rhythm. There is an intensity to this song which is felt almost immediately, and an intensity to Celeste’s performance, an urgency, like it’s a matter of life and death. There is a sense of danger and need in her voice, and there’s no holding back in this young woman. “I would swim as fast as I can/But you are a tidal wave.” And later in the song, she relaxes a bit when repeating the line, “I choose to swim,” which works well thematically. I love the strings on this track. That's Elijah Kirkland-Andrews on violin, and Vienna Sa on cello

The second, “Rag Doll,” has a cool, groovy vibe helped by the presence of horns. Alec Aldred joins Celeste on trumpet, and Chris Palowitch joins on trombone. This is one of my favorites on the CD. It’s about the strong, sometimes detrimental effect someone can have on us. At the beginning, the woman at the center of this song tells us: “Once I was a real girl, made of skin and bone/My teeth were tough, my fists enough/To protect my soul.” But at the introduction of the touch of the man, she becomes soft, his plaything, and tells us, “I am fraying, falling apart/I can’t get nowhere if you’re not there/I am tattered, torn at the seams/And the only cure is to be yours.” She maintains the metaphor of the rag doll throughout the song.

“You Soul Belongs To Gin” describes another troubled relationship, this one with a man who relies on alcohol. This is a really strong track with some excellent lyrics. “You won’t call unless there’s a bitter taste in your future/You’re pulling me apart/Because you only touch me if you’ve downed a bottle first/In fact, your heart won’t open unless it’s with a corkscrew/Pouring itself another night of blues.” She realizes she’s wasted so many nights, but it’s almost like she’s jealous of his drink: “You don’t really dream of me.” This is my other favorite track.

“Medicate Me” is an interesting track, and is really all about the vocals. Celeste’s vocal approach on this one begins more in the jazz realm, which I really like, and then as the song builds, it gets closer to what these days is called R&B. Here is a taste of the lyrics: “No bandage, no stitches could sew me up/I was terrified of dying/But not in your arms.” This song also provides the EP with its title in the line, “I’d asphyxiate when you were gone.”

Celeste Tauchar is on vocals, piano and keyboard. Joining her are Matthew Clinkenbeard on guitar, Koa Ho on bass, Chris Schreck on drums, Elijah Kirkland-Andrews on violin, Vienna Sa on cello, Alec Aldred on trumpet and Chris Palowitch on trombone.