I Dream Of Wires DVD Review 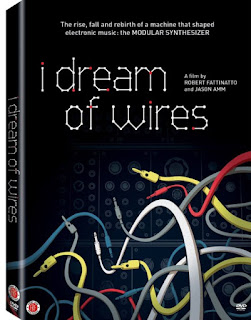 I’ve had mixed feelings about synthesizers. I first heard the Moog on Monkees tunes like “Star Collector” and “Daily Nightly” when I was a kid, and loved it. Then in the 1980s, it seemed synthesizers were taking over music, and people with little or no musical ability were able to churn out songs. And at that point I wanted them all destroyed. But since then I’ve learned to appreciate what they can do in certain contexts. I suppose I have a more balanced perspective (though I am still diametrically opposed to drum machines). Giving me a greater appreciation of these instruments is the new film I Dream Of Wires, a truly interesting documentary that recounts the history of the synthesizers and their use. The film is narrated by Patti Schmidt, who early on talks about how when electricity was first used, it quickly entered into every aspect of life. “So it’s not surprising that electricity would find its way into the world of music, not just to record it, as the phonograph had done, but to make it, using electricity as the sound source. Truly electronic music.”

There is a lot of interesting information about two pioneers in synthesizers: Robert Moog and Donald Buchla. They came at the idea from two very different perspectives, and with different intentions. Robert Moog was based on the east coast, and began selling do-it-yourself kits for theremins, before creating his synthesizer, which he hooked up to a keyboard to make it something a working musician could use. Meanwhile, in the San Francisco area during the height of the counterculture, “a very different modular synthesizer was born.” As Patti Schmidt tells us, Donald Buchla was “a former NASA engineer who drifted into the west coast counterculture and its community of artists and musicians.” The differences in the types of synthesizers these two men created, and the ways they were used are fascinating. It’s interesting too that it was at the Monterey Pop Festival that the Moog first took off on the west coast, something I didn’t know before.

The film includes interviews with many of the key players, including Ramon Sender and Morton Subotnick, who founded the San Francisco Tape Music Center, a collective of experimental composers with ties to Donald Buchla. Morton Subotnick also recorded Silver Apples Of The Moon, the first electronic album released commercially. It’s interesting to hear the different perspectives on that album versus Switched-On Bach, an album by Walter Carlos where he performed classic works by Bach on the modern instrument. It was the latter album that introduced electronic music to a large audience, but the differences in the two records are greater than their similarities.

There are also interviews with several musicians, including Gary Numan, Vince Clarke (of Depeche Mode and Erasure), and Trent Reznor and Alessandro Cortini of Nine Inch Nails. With regards to the fashion for preprogrammed sounds, Trent Reznor says, “Interesting new sounds took a back seat to cheaply made junk that could do lots of things kind of half-assed, but not anything with any character.”  I do wish that Walter (now Wendy) Carlos had been interviewed.

I also wish the film had more music, like tracks from Switched-On Bach, or music from Nine Inch Nails, Erasure, or Emerson, Lake And Palmer. Its lack is the film’s one major weakness. Co-writer and producer Jason Amm, as Solvent, provides most of the music heard in this film. And actually, Solvent music plays basically throughout the film. It would have been better to include a greater variety of composers from various times in the history of synthesizers. The Monkees are mentioned at one point, but we don’t hear any of their music. Emerson, Lake And Palmer are mentioned several times, but again, we hear nothing from that band. Also, the movie is definitely very fond of modular synthesizers. We don’t hear from any detractors. But like I said, the film held my interest, and I learned quite a bit from it.

The DVD contains more than an hour of bonus material, included an extended interview with Trent Reznor and Alessandro Cortini of Nine Inch Nails. Trent talks about working in a store selling synthesizers, and about his own use of the instruments. Synth 101: An Introduction To Modular Synthesizers For Beginners is basically a ten-minute tutorial. This is actually really handy, and it might not be a bad idea to watch this bonus feature before watching the film.

The bonus footage also includes a tour of Vince Clarke’s synthesizer collection, and a profile on two Canadian manufacturers of synthesizers. There is also a look at Solvent’s process for creating the soundtrack, as well as three Solvent music videos (for “Burn The Tables,” “Pattern Recognition” and “Themogene”).

I Dream Of Wires was directed by Robert Fantinatto, and is scheduled to be released on DVD on August 4, 2015 through First Run Features.
Posted by Michael Doherty at 9:47 PM