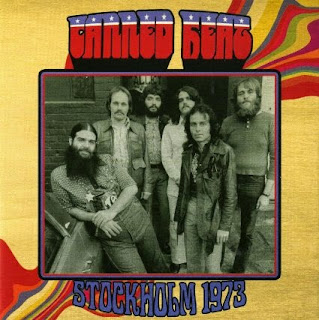 Three new live albums by blues rock band Canned Heat are being released on Cleopatra Records. The first, Carnegie Hall 1971, captures a performance the band did with John Lee Hooker, and was released in April. The second, Stockholm 1973, is a concert Canned Heat did on June 17, 1973 in Stockholm, Sweden. Like the first release, this CD includes liner notes by Dave Thompson, including portions of an interview with drummer Adolfo “Fito” de la Parra.

The disc kicks off with “Let’s Work Together,” a tune that was a hit for the band in 1970, and a song that was also included on Carnegie Hall 1971. It opens with an introduction: “We’re going to have ourselves some fun tonight. We’re going to do an old one now, one that we made about three years ago called ‘Let’s Work Together.’” Funny how at the time a song that was three years old was considered “an old one.” Ah, our changing perspectives. Anyway, this is a really good rendition, featuring some nice work by Ed Beyer on organ. Beyer had joined the band the previous year.

That’s followed by one of the band’s most famous songs, “On The Road Again,” which was originally sung by band member Alan Wilson (who died in 1970) and released as a single. The version here includes a great, lively, bluesy jam. And the following tune, “Harley Davidson Blues,” is one of my favorites on this release. It’s a fun, playful, catchy tune, with a cool country edge. Then “Election Blues” includes a false start, with the band changing the key (“We gotta change the key on that, fellows – let’s lower that down one”) and starting over. This is a good slow blues number with some timely political references: “Things seemed to be going right, then Watergate hit us, was a mighty blow” and “Dick’s on the throne again, baby, leaning so far right we might fall in.” But it’s the guitar work during the instrumental section that makes this track something special. And in the next instrumental section, there is some wonderful stuff on piano. This version of “Election Blues” is more than ten minutes long, and so there is plenty of room for these musicians to shine.

“So Long Wrong” also includes a groovy, energized jam. And then “Shake ‘N’ Boogie,” at fourteen minutes, is all about the jam. While not as long as the rendition included on Carnegie Hall 1971 (which is approximately twenty minutes), this version has a lot of fun moments, including some vocal play near the beginning and nods to “Let The Good Times Roll” (the Shirley And Lee tune). And of course there’s a guitar solo to sink your teeth into, and some very cool work on bass, as well as a drum solo. This track is obviously one of the disc’s highlights. The CD then concludes with “Goodbye For Now,” a good blues tune. Toward the end, they tell the crowd: “I hope you all had a good time tonight, or this afternoon, or whatever it is. We had some fun.” This track oddly quickly fades out at the end, and it feels like we might be missing the last few moments of the performance.

CD Track List
Stockholm 1973 is scheduled to be released on May 12, 2015 through Purple Pyramid, a division of Cleopatra Records.
Posted by Michael Doherty at 3:17 PM