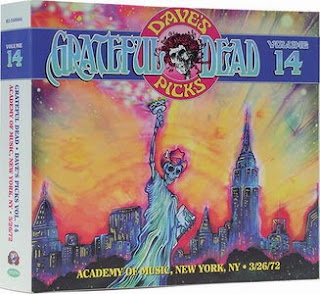 Dave’s Picks Volume 14 contains the complete show that the Grateful Dead did on March 26, 1972 at The Academy Of Music in New York. This was an interesting time for the band. Keith Godchaux had joined already, but Pigpen was still hard at it, and in fact had some new material, which can be heard on this three-disc set. And the band was about to tackle Europe. In fact, these New York shows were the last shows before their famous Europe ’72 tour. This three-disc set is limited to 16,500 copies, each numbered (mine is number 14077). And if you ordered a subscription, this set also includes Dave’s Picks 2015 Bonus Disc.

The first disc contains most of the first set (the final song not fitting, and so opening the second disc), starting off with “Greatest Story Ever Told.” That tune is followed by some great stage banter about choosing a song, and about a guy hollering out requests for “Alligator.” The band then goes into a really nice version of “Cold Rain And Snow.”

Pigpen then gets things rocking with “Chinatown Shuffle,” one of his new tunes, and one that is a tremendous amount of fun. For those who haven’t heard it, here is a taste of the lyrics: “And I can't handle your problems/Don't try to handle mine/Get yourself a shotgun, a pocket full of shells/And we can while away the time.” It’s a breezy number, not one of those epic Pigpen grooves, but still really good. The first disc also contains Pigpen’s “Mr. Charlie,” a song the band debuted the previous summer.

The band goes country with a cover of Hank Williams’ “You Win Again,” a song they did only in 1971 and 1972. It’s a shame they didn’t do this one more often. It’s an excellent song, and Jerry does a great job with it. They also do covers of “Big Railroad Blues,” “Big Boss Man” and “El Paso.”

The second disc begins with the final song of the first set, Pigpen belting out “Good Lovin’.” And of course it’s his vocal improvisation during the song’s jam that is the track’s highlight. His repetition of “All night long” at one point might call to mind “Wang Dang Doodle.”

The second set opens with a bang – a seriously good version of “Truckin’” with a jam that just keeps rocking. My lower back had been hurting for several days, and I couldn’t help but dance to this one. And you know, I think it helped. And then ten minutes in, the guys return to the song’s final verse. Why not? And after that, the jam gets a bit mellower and exploratory, and eases into a drum solo, which then breaks open into an excellent “The Other One.” This version begins as a great, pounding number, and soon goes off into odd territory. And more than ten minutes into the tune, they return to main theme of the song and sing the first verse. And then it’s off into the unknown again. Then when it seems they might return to that main theme again, interestingly “Me And My Uncle” emerges. The second that song ends, the band does go back to the main theme of “The Other One” and after a little while gets round to the second verse. This entire section is fantastic, and is one of the highlights of the show.

As the second disc ends, the band is going into “Wharf Rat” out of “The Other One,” and it is there where the third disc picks up. “Wharf Rat” is one of my favorite Dead tunes, and this rendition is wonderful. I especially like the quiet delivery of the “But I’ll get back on my feet someday” section, and how “I’ll get up and fly away” emerges powerfully from that. “Sugar Magnolia” has a ton of energy, as you’d expect, and there is a nice long pause before “Sunshine Daydream.” And then Pigpen brings things down a bit with a moving rendition of his “The Stranger (Two Souls In Communion).” This song was played just a dozen times, all in 1972.  The band then wraps things up with “Not Fade Away” into “Goin’ Down The Road Feeling Bad” back into “Not Fade Away.” Apparently, there was no encore that night. None was needed; the band had already given the audience everything.