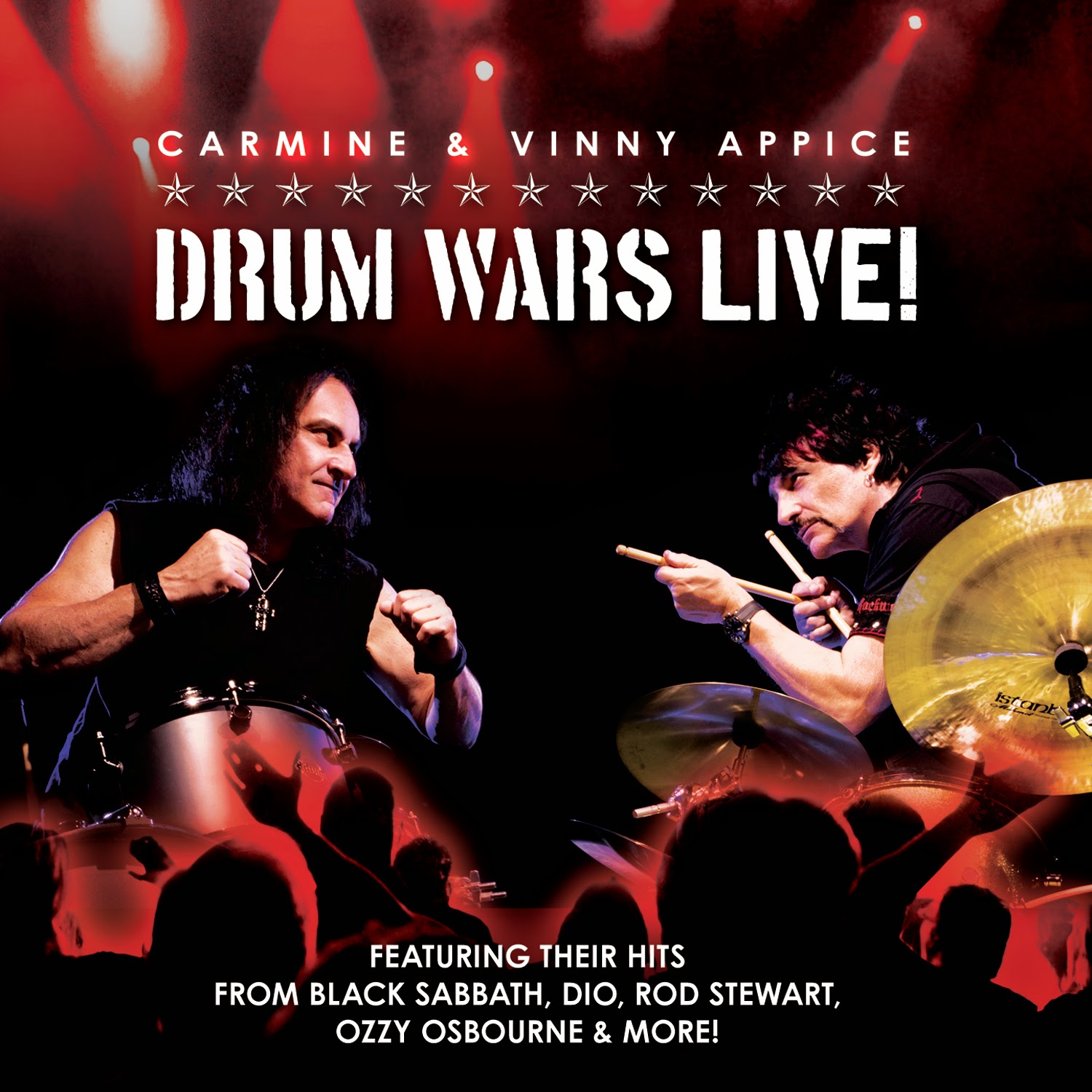 I started playing drums when I was thirteen, and the first book I got was Carmine Appice’s The Updated Realistic Rock Drum Method, which included two records. So Carmine Appice was closely associated with my love of drums. He has played with Vanilla Fudge, Cactus and Rod Stewart, among others. His brother Vinny has played with Black Sabbath and Dio. Now they’ve pooled their talents for the new release, Drum Wars Live!  This album finds them re-working some of the famous material they played on, such as songs by Black Sabbath and Rod Stewart. And of course the album includes plenty of good drumming. Joining the brothers are Jim Crean on vocals, Ethan Brosh on guitar and James Caputo on bass.

Drum Wars Live! begins with a delightfully absurd introduction, like that for a boxing match or a wrestling show: “Ladies and gentlemen, it’s time for Drum Wars, a battle of brothers. In this corner, from Black Sabbath, Dio, John Lennon, weighing in at a slender, muscular 175 pounds, using only a single bass drum, please welcome Vinny Appice! In this corner, from Vanilla Fudge, Cactus, Rod Stewart and Ozzy Osborne, weighing in at a whopping 365 pounds, using double bass drums to burn more calories, please welcome Carmine Appice!”

And then the show is off and running with “The Mob Rules,” a Black Sabbath tune. This version is done without that long intro, getting right into the song. And if you’re thinking that because this album focuses on the drums there will be no guitar solos, you are wrong. This track features some solid work on guitar by Ethan Brosh. But of course it’s the drum work that I’m interested in, particularly the stuff toward the end of the song.

That track leads right into “Drum Wars,” which begins as a drum solo, but does feature the other musicians for a certain section. I could do without the silly shouts of “Drum wars!” But at more than eight minutes, this track features lots of great, impressive drumming. And that’s what this is all about. “Drum Wars Part 2” isn’t quite as long, but has a lot of energy and some interesting stuff (and no shouts of  “Drum wars!”).

And there is lot more drumming on this disc. “The Flintstones” is a drum solo featuring both drummers. And then each brother gets his own solo. If you love drums the way I do, there is plenty to dig on this disc, even if you’re not into hard rock.

I was never really a Dio fan, and this album includes a few Dio songs: “Holy Diver,” the title track from the band’s first album; “We Rock,” the opening track from the second album, The Last In Line; and “Stand Up And Shout,” the opening track from Holy Diver. There are also a couple of Ozzy Osbourne songs: “Bark At The Moon,” the title track from his 1983 release; and “Crazy Train,” from his debut solo album. I've always enjoyed “Crazy Train,” and this is a pretty good rendition.

Perhaps the biggest surprise on this release is the cover of Rod Stewart’s “Do Ya Think I’m Sexy,” although Carmine Appice co-wrote the song. They give it much more of a hard rock feel, and their version is a couple of minutes longer than Rod Stewart’s original and includes an audience participation section.

CD Track List
Drum Wars Live! was recorded in June, 2014 at The Iridium in New York, and was released on November 17, 2014 through Deadline Music.
Posted by Michael Doherty at 2:38 PM