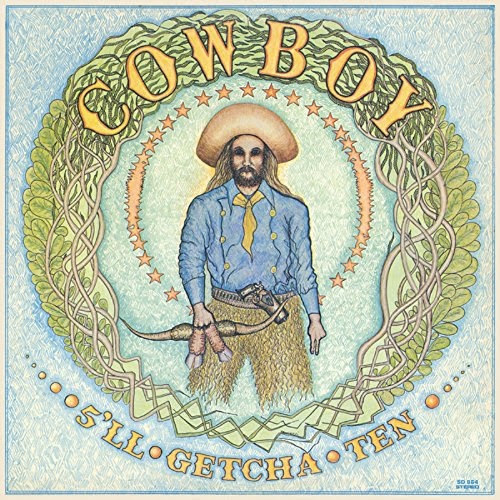 Real Gone Music specializes in finding great, often out-of-print music from the past to re-issue. Every once in a while there will be a band I hadn’t heard before, but one that I wonder how I could have possibly gone this long without hearing. Cowboy is one of those bands. And on their second album, 5’ll Getcha Ten, originally released in 1971, they provide a great dose of country rock. This album features some wonderful vocals, good lyrics, and delicious, mellow vibes. The early 1970s were the best period for country rock and folk rock, and this album from Cowboy is as good as just about anything else released at the time. If you dig The Byrds, Buffalo Springfield, CSN, and New Riders Of The Purple Sage, you should absolutely give a listen to this band.

All but one of this album’s songs are originals, most of them written by Scott Boyer. This album also features Duane Allman on a couple of tracks. This is the first official CD release of this album, and it includes new liner notes by Scott Schinder.

This album begins with “She Carries A Child,” a song written by Tommy Talton, one of the group’s twomain singer/songwriters. It has a natural vibe, which is also echoed in lyrics like, “The mother’s true conception/Depends on your reception/The delivery she will not need to be rehearsing/She learned it all from the universe.” It’s followed by “Hey There Babe,” which is probably the most fun track on this album (though “Shoestrings” is also fun, particularly its piano part). Written by Scott Boyer, it features lines like “And you won’t need no constellation to tell you who you are,” a line I really like. (Later in the song, the line becomes “And you won’t need to consultation to tell you who you are,” which I also appreciate.) This is delightful folk-rock gem.

The album’s title track, “5’ll Getcha Ten,” has a really sweet, relaxed vibe and some beautiful vocals. Here is a taste of the lyrics: “Take your time/Take your coat off/Ease your mind/Take a load off.” This one was written by Tommy Talton. There is a false ending, followed by a really nice instrumental section, which is my favorite part of the song. Cowboy follows the title track with the album’s sole cover, “The Wonder,” a song written by John McKenze. This one has a more serious feel to it, with its war-related theme.

“Lookin’ For You” is one of two tracks to feature Duane Allman, who died the same year this album was released. He plays guitar on this song, which was written by Scott Boyer. “Oh, please listen to what you heard/Because there’s a love song in every word/Oh come on, show me the way, show me the way.” The other track to feature Duane Allman is “Please Be With Me,” a song that Eric Clapton covered on his 1974 album 461 Ocean Boulevard. Duane plays dobro on this sweet, beautiful tune, which was written by Scott Boyer. Check out these lyrics: “I sit here lying in my bed/Wondering what it was I said/That made me think I lost my head/When I knew I lost my heart instead.” This is one of my favorite tracks.

Another of my favorites, “Seven Four Tune,” is also perhaps the liveliest track on this album. This one was written by Bill Pillmore. I love the vocal delivery, which has a sort of sarcastic edge on lines like “You know that I am grateful/But seeing’s I haven’t got a dime.” And I love these lines: “You can do anything that you want to/There ain’t no one here who will stop you.”

The album concludes with Pete Kowalke’s contribution, “What I Want Is You.” This is another sweet, gorgeous, mellow tune, a love song with a great, laid-back instrumental section in its second half.

CD Track List
This re-issue of 5’ll Getcha Ten was released on December 2, 2014 through Real Gone Music.
Posted by Michael Doherty at 5:43 PM