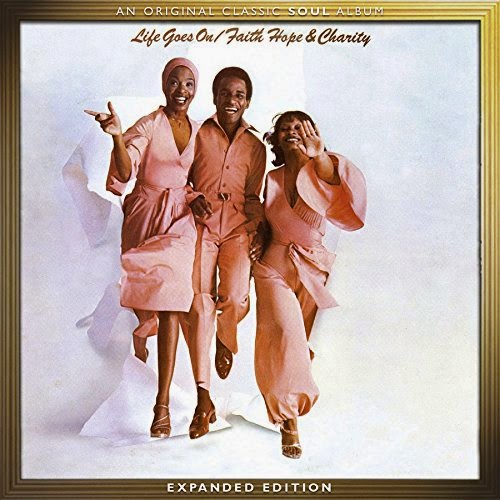 Faith Hope & Charity’s second record for RCA, Life Goes On, originally released in 1976, finally sees an official CD release, thanks to Real Gone Music. This expanded edition includes four bonus tracks. With only thirteen tracks, you might be surprised to find that this disc contains more than 76 minutes of music. But this was the era of disco, and some of these songs were made for dancing, particularly the bonus tracks.

These songs contain a lot of positive, fun vibes. Check out “Just Wanted To Say I Love You,” for example, the chorus of which has a gloriously, unabashedly happy vibe which I can’t help but love. The album has an odd flow, often returning to its title track. Most of the songs were written by Van McCoy, who also produced and arranged the record. He’s probably best known for “The Hustle,” but he also wrote tunes for Jackie Wilson and Gladys Knight And The Pips, among others. The trio of Brenda Hilliard, Albert Bailey and Diane Destry surrounded themselves with some excellent musicians for Life Goes On, including Hugh McCracken on guitar and harmonica, and Steve Gadd on drums. This expanded edition includes liner notes by David Nathan.

The album’s title track opens with strings creating a pleasant, magical sense, then settles into a good, slow soul groove, with the title being the only line sung. Then suddenly a disco beat comes in, and the song has a very bright, happy mid-1970s feel, with lines like “Don’t you know that life goes on/The sun keeps shining/Every cloud does have a silver lining.” I love the way the energy builds toward the end.

The bonus tracks include the 12” version, which is actually shorter, cutting that orchestral intro and beginning with the disco beat. It also has a cool percussion section.

“Gradually” features a good rhythm, including some cool work on bass by Gordon Edwards and of course some nice stuff by Steve Gadd on drums. The song has a very full sound, with strings and all. It was co-written by Van McCoy and Charles H. Kipps, Jr. Here is a taste of the lyrics: “I always thought I was strong/But then you came along/And I gave you my heart for a song/And before I knew it, love got the best of me/But it happened so gradually.” Interestingly, at the end the group returns to the opening of “Life Goes On.”

The bonus tracks include the extended 12” version, which opens with percussion, and then toward the end has an excellent section of vocals and percussion, with the vocals slowly fading as the rhythm takes prominence. I actually prefer this version. “Oh, and I know I’ll stop hurting/Though I know it’s going to be ever so gradually.”

The slower “I Want A Man” really focuses on the excellent vocals of Brenda Hilliard, and because of that is one of my personal favorites. Listen to her on lines like “I want a man who loves with a gentle touch/Because to a woman, yeah yeah yeah, tenderness means so much/And when I find him, I’ll never let him go.” It’s a powerful performance. The backing vocals are also delightful. Zulema Cusseaux (an original member of the group) provides backing vocals on this track. After the song fades out, there is just a few seconds of “Life Goes On.”

Things are much more firmly in the disco realm with “Positive Thinking,” and as you might guess, this one is full of positive vibes. “Positive thinking, that’s the key to making dreams come true/So try a little positive thinking/It worked for me, and it can work for you.” This one really has smooth backing vocals, plus such a ridiculously optimistic message that you’d feel like a jerk for disliking the song.

The bonus tracks include the extended 12” version. I dig the bass in the groovy instrumental section.

“You’re My Peace Of Mind”

Some cool, bright work on harmonica by Hugh McCracken kicks off the happy dance song, “You’re My Peace Of Mind.” “You’re my peace of mind/That's what you are to me/Baby, you’re my sanity.” This one is a lot of fun, with some great energy to the vocals, and more delicious work on harmonica later in the tune. This is definitely one of the album’s highlights. Add this track to the playlist for your next dance party.

Or, better yet, add the 12” version, which is included in the bonus tracks. It is nearly ten minutes long, with a seriously cool extended percussion section, leading to a groovy full-band instrumental section, a highlight of this CD.

The group does an odd disco medley of “Cherish” and “Monday, Monday.” I like what they do vocally on “Cherish,” which works in this dance realm. The vocals sound good on “Monday, Monday” as well, but I’m just not sure how I feel about a dance version of this song. Something in me is fighting it, bristling against the very idea of it.

The only track I don’t care for is the patriotic dance number, “A Time For Celebration,” with lines like “Show the pride that you feel in the nation/Raise up your flag with elevation” and “Now we’re number one.” Ugh. It even includes touches of “America (My Country ‘Tis Of Thee)” and “America The Beautiful.” It’s an awful song. Fortunately, it’s one of the shorter tracks, at less than four minutes.