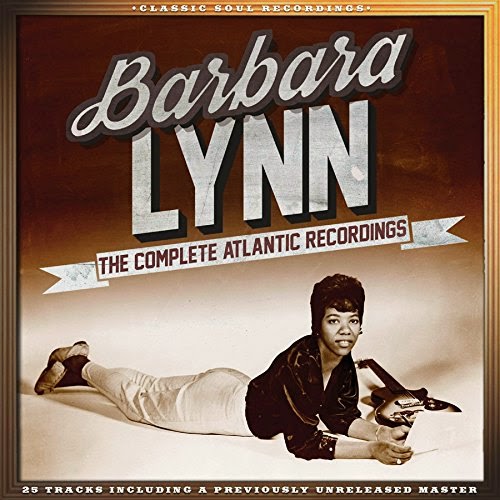 Barbara Lynn’s The Complete Atlantic Recordings is an excellent collection of soul tracks from the late 1960s and early 1970s. In addition to having a damn good voice, Barbara Lynn Ozen is an accomplished songwriter, and there are several original tracks here. There are also some nice choices of covers, like an excellent rendition of Clarence Carter’s “She Ain’t Gonna Do Right,” here titled “He Ain’t Gonna Do Right.” And several songs were written by Cliff Thomas, Bob McRee and Ed Thomas, who arranged her album. To my ear, most of the best tracks are the ones Barbara Lynn wrote herself. But basically all the songs here are really good (the exception for me being “Mix It Up, Baby,” which is one of those songs that lists all the popular dances, with lines like “Do the skate/And do the funky Broadway” and so on).

The Complete Atlantic Recordings opens with “This Is The Thanks I Get,” a groovy original composition that begins quietly, almost sweetly, with the line “I heard that you’re going to leave me.” But then what she’s saying really hits her, and the power behind her vocals increases as she makes her case: “I worked my fingers down to the bone/To try to make you a happy home/So now you’re leaving me/This is the thanks I get, baby.” She can no longer keep her emotions in check. It was released as a single, reaching #39 on the R&B chart.

The flip side to the single is an oddly intense track titled “Ring Telephone Ring.” There is a kind of sexy heartache in her voice, which strangely at a couple of key moments reminds me of Janis Joplin (not so much in the actual voice, but in the emotion, in the feelings behind the voice), like on the lines “Why won’t he call/He could be out having a ball.”

“You’ll Lose A Good Thing” was a big hit for Barbara Lynn in 1962. She recorded this newer version for inclusion on her sole LP for Atlantic. It’s a wonderful tune, with that classic R&B vibe. Her vocals are so bloody good on this song, which she wrote. By the way, the original version was included on the soundtrack for John Waters’ film Hairspray.

There is something absolutely delightful about “Only You Know How To Love Me.” I think mainly it’s those little touches on horn, but this song also has a nice rhythm and some sweet backing vocals. This one was written by Cliff Thomas, Bob McRee and Ed Thomas.

“Until Then, I’ll Suffer” is such a great slower number, with gorgeous vocals. And I believe her when she repeats, “Until then I’ll suffer.” I believe everything she sings, as there is something so honest, so genuine in her delivery. “But one thing I can say, I’ve been good woman/I’ve done everything for you.” Barbara Lynn wrote this one. It was included on her 1968 record, and then released as a single in 1971, reaching #31 on the R&B chart. This is one of my favorite tracks.

Another of my favorites is “Sufferin’ City.” It has a great vibe, and a strong vocal performance by Barbara Lynn. “Can you find it in your heart to show a little pity/And help me get away from this sufferin’ city/I’m tired of being stepped on, pushed round and scorned/My heart is broken and my pride is torn.”

“Unloved, Unwanted Me” is another strong track in which she opens her heart to a man who doesn’t love her in return. She hopes one day to be over it: “So I’ll just go on my way/And tell my heart I tried/And baby, maybe someday/I can take it all in stride/Tears roll down my face/ I can hear my poor heart say/Unloved, unwanted by you.”

“You’re Gonna See A Lot More (Of My Leaving)” is a highlight of this collection. I love her vocal performance, as she tells her man, “And your good times, your good time days are numbered/And it’s shaky ground you’re standing on/You’re gonna see a lot more of me leaving/And a whole lot less of me coming back home.” She does so much with this song, and all of it rings so true. This is a delicious recording, with a really nice ending.

The collection’s previously unreleased track is a cover of “Soul Deep,” a song that was a hit for The Box Tops in 1969. Actually, it’s possible – as this disc’s liner notes point out – that Barbara Lynn’s recording is the original version of this song, which was written by Wayne Thompson. Either way, it’s a really good rendition.

“You Better Quit It” is a seriously cool tune with a good energy and the right amount of attitude. Oh yes, this is not a woman who will be pushed around. “You can’t love me and other girls too/That kind of arrangement just won’t do/You better quit it, baby, before you push me too far.” This song was written by Cliff Thomas, Bob McRee and Ed Thomas.

“You Make Me So Hot” is a very groovy, sexy song, with some nice work on horns. It was written by Barbara Lynn, and released as a single in 1973. “There's a her for every sir/And a sister for every mister/There's a he for every she/And baby, you're for me.”

The Complete Atlantic Recordings was released on September 30, 2014 through Real Gone Music.
Posted by Michael Doherty at 11:08 PM