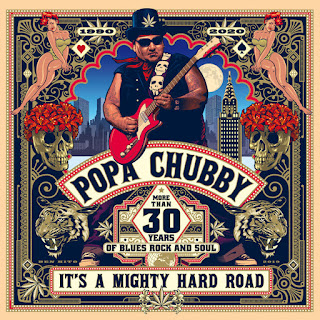 In these dark and disturbing times, the blues are often the order of the day, and one man who can serve up exactly the feast you need is Popa Chubby. He has been living and delivering the blues for three decades now, and is showing no signs of slowing down. His new album, It’s A Mighty Hard Road, features a whole lot of original material by Ted Horowitz (Popa Chubby), along with a couple of covers, for just over an hour of blues rock. On this album, he provides the vocals and plays guitar, as well as bass, drums, keys and harmonica on certain tracks. Joining him are Dave Keyes on piano and organ, Steve Holly on drums on some tracks, Dan Castagno on drums on some tracks, Brett Bass on bass on certain tracks, and V.D. King on bass on some tracks.

The album gets off to a fun start with “The Flavor Is In The Fat,” a song about eating, something we all take some pleasure in (and also about being a large man). And is that a playful sexual reference in the line “Won’t eat no salad, even if it’s tossed”?  This song features some wonderful work on guitar during that lead in the second half of the track. That’s followed by the album’s title track, “It’s A Mighty Hard Road,” a blues rocker about dealing with work and making ends meet. “Called up my boss and told him I was sick/He said you’d better get your butt here quick/It’s a hard road (it’s a hard road)/It’s a mighty hard road.” And there are some lyrics about a literal road as well, an interstate where he gets pulled over by the fuzz. “Roll down the windows, better hide your weed.” What, still? Well, of course no one wants someone high behind the wheel.

“Buyer Beware” is a seriously fun tune, one to get you on your feet and on the dance floor, with lyrics about purchasing a used guitar. “She said, hey there, handsome, can I be of service/I shuddered just a little bit, made me nervous/I said I was calling about that sweet guitar/You had listed, I don’t live far.” This song contains a reference to Jimi Hendrix. I dig the track’s rhythm and the work on keys. The last line is spoken, almost as an afterthought: “I’ll give you fifty bucks for that guitar, man.” That is a nice touch. I mean, the song is over, and it’s like he can’t walk away, so comes back to make an offer. “If You’re Looking For Trouble” is a harder rocking number. “If you’re looking for trouble, trouble gonna come your way now.” This song has a delicious, mean vibe, and his voice has a great, raw power that could spell trouble for someone. And that guitar seems ready for anything. That’s followed by “The Best Is Yet To Come,” which has a sweeter vibe. It’s a soulful number with a positive bent, particularly in lines like “But the sun is sure to rise again/And make your spirit strong.” Oh yes, we need songs like this one (especially these days when our country has turned ugly, and is in the hands of a demented racist and a horde of greedy fascists), and his voice delivers the promise well, for it is a voice of experience and some warmth. This is one of favorite tracks. “And if you’ve suffered from your failures/And struggled with your dreams/And that rainbow shining in the sky/Is never what it seems/Don’t lose your dreams to sorrow/Don’t lose your love to fear/For the love that you’ve been seeking/Is so very, very near.” Don’t give up, this song tells us. Toward the end he sings, “If you’re worried about tomorrow/Your anxiety’s strong/I got something for you/Tomorrow never comes.” This is an idea he returns to in “More Time Making Love,” where he sings “And tomorrow, tomorrow might never come.”

“Gordito” is a cool instrumental tune with a more relaxed vibe than some of the other tracks. This one is all about mood. Popa Chubby then delivers a funkier vibe on “Enough Is Enough.” How is that for a song title that speaks to our times? Most of us must say “Enough is enough” a dozen times a day, whenever that worm Mitch McConnell speaks or that racist Donald Trump holds another of his Nazi rallies. Enough is enough! Things get fun with “Why You Wanna Bite My Bones?” The opening lines are “I started drinking on Friday night/By Saturday evening I was feeling all right/Called up my woman on the telephone/Said I’m hungry, baby, and I’m all alone.” This track swings and moves, and is quite playful. “You can have my skin/It’s soft and fair/You can chew my fat/I just don’t care/Daddy, why you always bite my bones?” Then “Lost Again,” the final original number on this disc, is a seriously cool, sly tune with a kind of sexy and classic vibe. It features a delicious and catchy rhythm, with some nice work on guitar. Plus, I dig that stuff on keys. But what really sells this tune is that fantastic vocal delivery. “I thought that I was over this/Thought that I was free/But a specter never leaves you/It never lets you be.” I totally love this song. It even includes some cool whistling near the end. Yes, this song has my vote for the album’s best track.

The disc’s last two tracks are covers. The first is a lively version of Leon Russell’s “I’d Rather Be Blind” with a vibrant, passionate vocal performance. Popa Chubby wraps up the album with a cover of Prince’s “Kiss.” Since Prince’s death in 2016 (that most horrid of years that took Leonard Cohen, Leon Russell, Carrie Fisher, Gene Wilder, Alan Rickman, David Bowie, Paul Kantner, Dan Hicks, Rob Wasserman and Merle Haggard from us, and put the country into the hands of its scummiest citizen), I have heard quite a few versions of this song. Popa Chubby delivers a good, cheerful, funky rendition that features some totally delightful work on harmonica. It actually ends with just harmonica.

CD Track List
It’s A Mighty Hard Road is scheduled to be released on March 1, 2020.
Posted by Michael Doherty at 12:25 PM