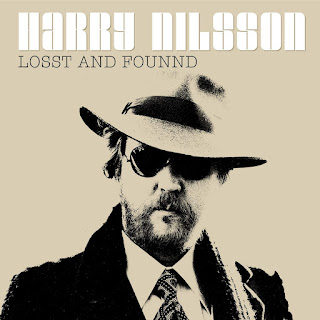 Harry Nilsson left the world way too soon. The incredibly talented singer and songwriter was only fifty-two years old when he died of heart failure. He had been working on a new album, and now – at long last – we get to hear it. Losst And Founnd features mostly original music, written or co-written by Harry Nilsson. And for Nilsson fans (and, really, the only people who aren’t Nilsson fans are people who somehow haven’t heard his music yet, or – more likely – have heard it, but didn’t realize who it was they were hearing), this album is a total treat. It was produced by Mark Hudson, who includes in the liner notes a letter to Harry. In that letter, he writes, regarding the album, “I promised you we would finish it and get it out there one day and that day has finally come!” By the way, the musicians on this album include Harry’s son Kiefo on bass.

The album opens with its title track, “Lost And Found,” a good rock song with a full and vibrant sound, including a horn section. At times, the sound is in danger of overpowering his vocals, but never quite does. The song’s opening lines are “One for the government, two for the president/Standing outside right next to his monument.” But the following lyrics, when applied to the album itself, feel exactly right: “Lost and found/What a miracle/Lost and found/What a joy.” Indeed! This one was written by Harry Nilsson, Mark Hudson and Steve Dudas. That’s followed by “Woman Oh Woman,” a quirky, delightful song, precisely the sort of thing I expect and want from Harry Nilsson. Check out these lines, which begin this one: “If you knew true devotion/You’d jump into the ocean/And drown.” This track features Van Dyke Parks prominently on accordion.

“U.C.L.A.” is another quirky number that had me smiling with its opening lines, “There’s no new Hampshires left/I’ll bet the boardwalk’s next/There’s no new York/There’s no more cork/To send the bottle west.” Harry Nilsson’s friendship with John Lennon is well documented, and it is known that the Beatles were big fans of his work. Early on, Harry Nilsson covered “You Can’t Do That,” and in that song included references to a lot of other Beatles songs. He does something similar in part of “U.C.L.A.,” the lyrics containing quite a few Beatles references – to “Penny Lane,” “Yesterday,” “Something” and to Ringo Starr (and his drum beat for “Come Together”). I love this song and its play with words, and that little reaction to the line “There’s nothing left to fight” made me laugh out loud. Then we get the first cover of the album, the classic “Hi-Heel Sneakers,” and because of that line in the previous song, the line “In case some fool might want to fight” stands out in this rendition. Here the song is coupled with “Rescue Boy,” written by Harry Nilsson and Mark Hudson. This song has basically the same music, as well as a play on that line, here “In case some fool might want you to write.” It’s an interesting and humorous track, and I dig that harmonica. That’s followed by “Lullaby.” As its title promises, this song is a lullaby, and it has a sweet tone. This song takes us in its arms and reassures us, “There’s no one in your closet/Your toys are all asleep/And we love you.” We can all use a bit of reassurance these days, eh? “Lullaby” ends with these lines: “I’ll watch you when you’re sleeping/I’ll see you in a dream/I’ll wake you in the morning/And I love you.”

Things then a little rowdier, a little wilder with “Animal Farm.” I love those horns, plus, that whistling. Have you been thinking of George Orwell lately? Of course you have. That’s followed by perhaps the most surprising track on the album, a cover of Yoko Ono’s “Listen, The Snow Is Falling,” a song from John Lennon and Yoko Ono’s Wedding Album. Harry gives it a different groove. Klaus Voorman plays bass on this track, another cool Beatles connection (he was a member of the Plastic Ono Band). While “U.C.L.A.” contained several Beatles references, “Try” sounds a whole lot like “All You Need Is Love,” and he actually quotes that song’s title at one point: “You don’t need a big balloon/All you gotta do is try, try try/With a little help, you can get by/All you need is love and you can fly.” This song has an undeniably positive vibe. Harry then takes the title of the next track, “Love Is The Answer,” from the lyrics of John Lennon’s “Mind Games” (Andie MacDowell’s character in Four Weddings And A Funeral quotes that line). This is a pretty song, one you could just drift away on. There is something kind of magical about it, it seems to have wings.

“Yo Dodger Blue” is kind of an odd track. It’s a straightforward number designed to be played at Dodgers baseball games. It is simple, fun, and it rocks, but does seem a bit beneath Harry Nilsson’s talents. Though Harry was a fan of the team, the song was probably not meant to be taken too seriously. Right? Still, it works for what it is, although I could do without the crowd noise. The album then concludes with a cover of Jimmy Webb’s “What Does A Woman See In A Man.” This song was fairly new at the time of this recording, having been included on Jimmy Webb’s 1993 LP Suspending Disbelief. It seems like a song that Harry could have written himself. The music and the vocal delivery are sweet and tender, and the lyrics are hilarious. Here is a taste: “He drives a gas hog like Attila the Hun/And woe to the luckless pedestrian/While she prefers bikes and bird-watching hikes/And sailing and riding equestrian.” On this track, Harry’s voice is supported by piano and strings (and that is Jimmy Webb himself on piano). Check out these lines: “Doesn’t she know that she’s unique/Doesn’t she see that he’s just a freak of nature/Overbearing, insecure, wanting love but so unsure.”

CD Track List
Losst And Founnd was released on November 22, 2019 through Omnivore Recordings, and is available on both CD and vinyl.
Posted by Michael Doherty at 9:24 AM