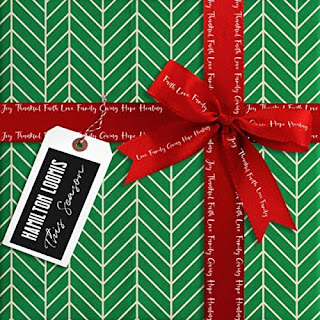 Hamilton Loomis has been dishing out bluesy soulful rock music for twenty-five years, and now – because it is the law – he is releasing his first Christmas album. Titled This Season, it is a good mix of originals and covers, including a couple of traditional numbers. Hamilton plays guitar, bass, keys and harmonica on this release. Backing him are Mike Meade on bass and Brannon McLeod on drums. The album is dedicated to Hamilton’s son, Bo Jordan Loomis.

The disc kicks off with its title track, “This Season,” a delightfully funky holiday song with a message of uniting and healing, perfect for us in these dark and divided times. “Bring us hope/Bring us light/Because we need it tonight/Show some love/Show the way/On this Christmas day.” Ah, yes. As much as I appreciate the song’s message and theme, it is that bass line that really grabs me. This is an original song, written by Hamilton Loomis, inspired by his son, who was diagnosed with hyperinsulinism. Hamilton follows that with a cover of “Lay Around And Love On You,” here shortened to “Lay Around And Love,” written by Bobby David and David Gillon, and originally recorded by Ray Charles. Okay, first let’s get clear that grammatically it should be “Lie Around And Love.” That aside, this is an enjoyable song. It is not a Christmas song, but Hamilton changes the song’s first line from “It’s Monday morning, 6 a.m.” to “Well, it’s Christmas morning, 6 a.m.”  The second line – “Time for me to go to work again” – is not changed, making me wonder what his job is, that he has to work on Christmas. It’s a little weird, changing this song to a holiday song. What I really like about this rendition is that harmonica.

“Everything I Wanted” is a nice, soulful tune, written by Hamilton Loomis. It is a song about reuniting with his love at Christmas after separating last year. “There’s just one thing on my list this year/My baby at my door/I got everything I wanted this Christmas/I got everything I need/My baby changed her mind.” There is a cool lead on guitar in the second half of the track. That’s followed by another original tune, “Another South TX Christmas,” a fun country rock number that includes nods to several Christmas songs. In fact, it starts off with a bit of “Joy To The World,” and then has a “Frosty The Snowman” tease. “I don’t need no long johns/Don’t need no thermal hat/Northern folks, they got their winter coats/And I got my baseball cap.” Oh yes, those lines work for those of us in Los Angeles too. “You can keep your white Christmas/We’re all working up a sweat.” This track ends with a bit of “We Wish You A Merry Christmas.”

Things then turn more bluesy with “Underneath The Tree,” also written by Hamilton Loomis. This is a song about excitement over Christmas and the presents under the tree. Here Hamilton sings “I’ve been patiently waiting/I’ve been waiting all year long/Maybe they got me something special/I’ll take a peek when no one’s home.” But don’t worry, it’s not a song about greed; or at least he’s quick to make us believe that by singing “I don’t need much to be happy/It’s all about the little things in life/I’ve always been so easy to please/A little loving always gets me by.” Okay, sure, but the main thrust of this song is the eagerness to know what presents he’s getting. And who can fault him? This track becomes a nice little jam toward the end.

Hamilton Loomis then turns to a traditional Christmas song, “God Rest Ye Merry Gentlemen,” but delivers a rendition that is anything but traditional and tired. This is a seriously cool version, an instrumental rendition with a strong beat. This one too turns into a good jam, with some wonderful work on guitar. I like what he has done with this song. He follows that with a cover of “Christmas Tears,” a soulful bluesy number written by Sonny Thompson and Robert Charles Wilson and recorded by Freddie King (back when he was still Freddy King). Hamilton Loomis does an excellent job with it, putting a bit of pain and longing in his voice as he delivers lines like “Well, it seems like you’ve been gone/For a hundred years or more” and “I need you, baby/To hold me tight/I need you, darling/On this lonely Christmas night.” It is a really good vocal performance. He then gets things rocking with “Run Rudolph Run,” a song originally recorded by the father of rock ‘n’ roll himself, Chuck Berry. This version by Hamilton Loomis certainly rocks and is a lot of fun, a track to play to keep your holiday party cooking.

The disc’s final original tune, “Love Again Christmas,” caught me by surprise, its opening lines being “Yesterday is dead and gone/No more sorrow, no more pain.” It’s about someone returning to his life on Christmas and teaching him how to love again. I love the style of this song, particularly the work on guitar. It features a good bass line too. This is one of my favorite tracks, with a strong vocal performance and a cool jam at the end. The album then concludes with a traditional number, “O Holy Night.” This time Hamilton Loomis sticks fairly close to what we might expect from a version of this song, particularly in its tone, and the results are pretty.

CD Track List
This Season was released on November 29, 2019 on Ham-Bone Records.
Posted by Michael Doherty at 10:19 AM