Patsy Thompson: “I Think About You” (2019) Vinyl Single Review 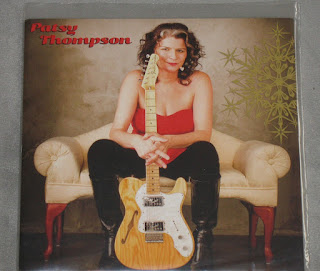 Singer and songwriter Patsy Thompson has a new album in the works. Due out in February, it is titled Fabulous Day. In time for the holidays, however, she is releasing the first single from the album, “I Think About You.” Patsy Thompson is from Canada, but spent the last fifteen years in Texas, and her time there certainly influenced her sound. She recorded several albums there, including Live In Texas. She is now back in Vancouver, British Columbia. Her new single features two original songs that she co-wrote, both to be included on her upcoming full-length release.

If you are looking for a good new Christmas song to play this holiday season, you should certainly check out “I Think About You,” the single’s A side. It is a sweet song with a full, bright country sound, and it features some nice work on fiddle. Here is a taste of the lyrics: “When the snow’s falling outside my window/I think about you (I think about you)/I think about you/When that mistletoe is hanging in the doorway/I think about you (I think about you)/I think about you.” Yes, it is about missing someone during the holiday, but it has an upbeat, cheerful feel. Nothing to get you down. The single’s flip side, “Dreamin’,” is a good choice to pair with “I Think About You,” for it shares some thematic elements. “And when I think of you/Grey skies all turn blue.” This is an enjoyable and pretty love song, with an endearing vocal performance. “I’m dreamin’/You got me dreamin’/Sweet, crazy feeling.” A couple of lines toward the end are spoken in an intimate near-whisper, reminding me of some songs I heard in my youth, a nice surprise.

I Think About You is available on both vinyl and CD.
Posted by Michael Doherty at 11:30 AM