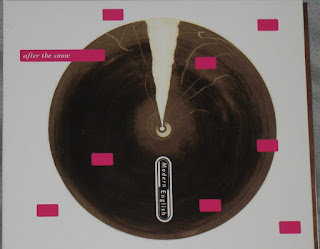 The early 1980s were a wonderful time for pop music, even though a lot of it was just sort of mindless fun. Sometimes you’d purchase an LP based on the strength of a single song and end up delightfully surprised. Such was the case for me with Modern English’s After The Snow, which is one of my favorite records of that decade. I bought the album because of the song “I Melt With You,” which as everyone knows is a fantastic song. I hadn’t heard any of the album’s other tracks, but figured, what the hell, even if they’re only half as good as “I Melt With You,” the record will be worth owning. But the entire album is magnificent, without a single throwaway track. The music really stood out at the time, in part because it had a more serious sound and mood than a lot of what was coming out then. But it continues to resonate, and now After The Snow has been remastered and re-issued, with several bonus tracks. Also, for some reason, there is new album artwork (I always liked the record’s original artwork). If you love this album as much as I do, you’ll certainly appreciate having this remastered edition. And if you’ve never owned this album, this is the perfect opportunity to pick up a copy.

After The Snow opens with one of my personal favorites, “Someone’s Calling,” a song that now reminds me of that introspective space you get into sometimes on a long drive, where everything means something, you know? The reason for that is that one time in the mid-1990s, my friend Andy and I drove across the country, deciding beforehand to listen only to 1980s music the whole way there and back. I made at least fifteen mix tapes containing all the fun hits. But in case we needed a break from that stuff, which I was sure we would, I took two albums along with those mixes, albums from the 1980s with a more serious tone – Leonard Cohen’s Various Positions and Modern English’s After The Snow. We ended up listening to both a lot.  As this is the album’s first track, it reminds me of that time. “Someone’s calling in the night.” The disc’s bonus tracks include the remix version of this song, which is actually slightly shorter and really good. “Someone’s Calling” is followed by another of the album’s strongest tracks, “Life In The Gladhouse.” Modern English is sometimes referred to as “post-punk,” one of those terms I still find rather goofy and pointless, but this song is certainly one that has some of those punk elements, that energy, without really being punk. I love that insistent rhythm, and there is that great moment toward the end where the rhythm stands alone. The bonus tracks include the remix version of this song, which is longer, as was usual. It begins with the beat, and has more of that odd stuff you expect from 1980s remixes – echoes and whatnot, stuff that feels unnecessary and clunky. It’s interesting, but not nearly as good as the original track. Also included is the 12” mix. This one too begins with an extended section of the beat at the beginning, and is the longest of the three versions included on this disc. That section toward the end with the prominent percussion is extended. I really like this version.

“Face Of Wood” has an interesting, somewhat dark introduction before it kicks in. This tune has a cool bass line, and I love the way the song is allowed to develop. It is well over two minutes before the vocals come in. And then there are some beautiful touches. “Standing in front of the mirror/I draw and pinch my skin/Tired eyes portray reality.” That’s followed by “Dawn Chorus.” There is something pretty about this one too, though perhaps darkly so. Plus, it features some good lyrics, such as these lines: “Opening windows with a wounded cry/The rainbow’s lost its dreams of gold/And everything slows.”  Then we get that hit, “I Melt With You,” which was the first song on the second side of the record. This song always makes me feel good. It has a positive sound, which works in wonderful contrast to some of its lyrics. I mean, the idea of melting with someone isn’t really all that appealing. Sure, it’s better than melting alone at the end of the world, I suppose. And then lines like “I made a pilgrimage to save this human’s race/Never comprehending the race had long gone by” are pretty damn serious. Of course, the line “The future’s open wide” has a more positive ring, and is greatly appealing. It was to me certainly in my youth, and still is, even if the future seems narrower, dimmer at times now. That part where they hum toward the end never fails to make me happy. The 7” version of this song is included in the bonus tracks. I have always preferred the album version, mainly because it is twenty seconds longer. I feel like the single version cheats us a bit, but I am still glad it is included.

In “After The Snow,” the album’s title track, they sing “Like an angel crying from the sky/I can see its beauty after the snow.” I feel like I can see it too, listening to this track. There is great driving energy to this track as well, something of a punk thing, yet it’s really about mood, this one. It creates a strange and attractive and perhaps dangerous landscape. That’s followed by “Carry Me Down,” the disc’s prettiest track. “Slipping through the sand and the sand through your fingertips/Silence was the fear and the fear knew me all too well/Waiting at the edge of the sea.” The original album then concludes with “Tables Turning,” an engaging song with a driving beat and some good lyrics. “Content but not quite safe/I stood and watched you fade away.” Apart from the tracks I already mentioned, the bonus material includes “The Prize,” which was the flip side to the “I Melt With You” single. It’s an interesting song, and some of the vocal work reminds of me of David Bowie, particularly the line “The prize is in your eyes.” And these days when I hear the line “Lies and more lies, lies and more lies,” I can’t help but think of a certain scoundrel in the White House. The bonus tracks also include “The Choicest View,” which was the flip side to the “Life In The Gladhouse” 12” release. This one too is interesting, and has plenty of room for some musical exploration, as it is more than eleven minutes. You can definitely get immersed in it. All the bonus tracks, by the way, were also included on the 1992 CD re-issue.