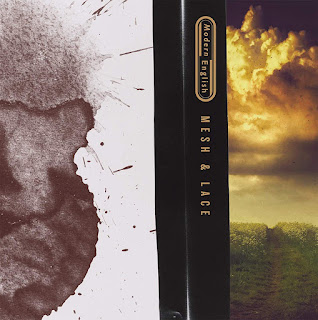 Along with After The Snow, Modern English’s Mesh & Lace has been remastered and re-issued. You’d think the album’s title comes from the lyrics to “I Melt With You,” but Mesh & Lace actually was released before After The Snow, so the song is referring to the album title. It was the band’s first LP, released in 1981, and is quite a bit different from the album that followed it. While After The Snow has a moody, dark beauty, Mesh & Lace has much more of a punk vibe and energy, and does not shy from taking chances. This remastered edition contains several bonus tracks, and – as with the remastered edition of After The Snow – new cover art for some reason (I prefer the album’s original cover). If, like me, you missed this one the first time it came around, here is a great opportunity to delve into this unusual and sometimes exciting album.

The CD opens with “Gathering Dust,” and right away there is a noticeable difference between this album and the one that follows it. For an opening track, it is rather daring, creating an odd mood at first, then thumping in with an intense punk energy, but also with strange science fiction disco sounds or something. It’s odd, but I’m digging it. “The pressure’s on, no time to lose.” However, this apparently wasn’t the opening track on the original release. It’s followed by “16 Days,” which was. This one also begins in strange territory, feeling like a harsh science fiction landscape. Then the first voices we hear are like those from a distant television. There are also repeated lines about the atomic bomb, something that was clearly on the minds of this band’s members. You’ll recall that “I Melt With You” is about a couple as atomic bombs detonate around them. But this was the early 1980s, the beginning of the horrifying Reagan years. You remember Ronald Reagan – he was the first asshole to promise to “Make America Great Again” (yes, that slogan was on his campaign posters). The song seems to burst at the end; things are falling apart, certainly, and we get caught up in the shreds of reality.

Yeah, this record is more experimental than what followed. I wish I had been turned onto this one when it was first released. “Just A Thought” feels like it opens in an aftermath, haunted voices howling out in pain. The line that stands out for me is “Space between the thoughts and acts.” There is some crazy energy here, to the music and to the vocal delivery, which is verging on shouting at times. This track is intriguing and engaging, and if you let the energy inhabit you, you might find yourself hurling your body around the room like a possessed acrobat bent on his own destruction. That’s followed by “Move In Light,” which has a great beat. And I love the repeated line “Exuberance leads to exhaustion.” Then “Grief” establishes a somewhat eerie atmosphere, an industrial landscape, dark and dangerous, populated by haunted fragments of humans. But light does eventually come in, shaking the dust from their skin, and it is only then that the vocals begin, nearly four minutes into the track. “Tears are moving down your face/Etching lines across your skin.”

The vocals to “The Token Man” have a different tone, almost mechanical, scary, the lyrics delivered without passion or compassion, as if by someone conducting experiments on human subjects. “Does it leave you all full of options/Or is there nothing to think about/Another lost man to join the millions/Fill him up, he will respond.” Then the drums come pounding, moving the track in a slightly different direction. That’s followed by “A Viable Commercial.” There is an excitement to this music, though that weird chime that comes in after a minute and a half at first makes me think it’s time to turn the page. Then we seem to be descending into some twisted subterranean lair as “Black Houses” begins. Once we reach a certain place, things level out, and a good, bright beat is established, as if to tell us that dancing is allowed in the dungeon, celebrate as best you can. “Religion can’t help/Religion can’t help/Religion can’t help/Religion can’t help.” The original album concludes with “Dance Of Devotion (A Love Song),” its deep pulse like a disembodied heart behind everything. This one begins in territory stranger than the others, but soon gives us a beat we can dance to, as its title promises. Then the thumping begins to take on an aggressive tone.

Well, the disc’s first track, “Gathering Dust,” is actually one of the bonus tracks, originally released as a single in 1980. The rest of the bonus tracks are placed after the original album tracks. The first of these is “Smiles And Laughter,” which was released as a single in 1981. Interestingly, that single’s flip side is titled “Mesh And Lace.” The album’s title track was not on the album, but was a flip side to a single. This band must just have really loved that phrase, that image, using it as a song title, an album title, as well as a lyric from its most well-known song. “No way out/No way out/I’m trapped/Encased/Entombed/Mesh and lace.” “Mesh And Lace” is followed by “Tranquility Of A Summer Moment (Vice Versa),” here shortened to simply “Tranquility.” It was originally released as the flip side to the “Gathering Dust” single in 1980. It begins with the sounds of birds. And then whales? This track sort of eases in, and features an interesting vocal delivery, bordering on spoken word at times

“Home” was included on the 12” release of “Gathering Dust” (a record that also included “Smiles And Laughter,” “Mesh And Lace” and “Swans On Glass”), but was originally released on a compilation of new wave bands titled Presage(s) in 1980. I’ve mentioned this several times, but I need to make a mix CD of songs titled “Home.” There are so many good ones, by artists like Ellis Paul, Erica Blinn, Michelle Malone, The Evangenitals, The Spongetones, The Ides Of March, Joe Walsh, James Houlahan, Janiva Magness, Iggy Pop, Fernando Perdomo, Anton Fig, and Christina LaRocca. This track has an interesting approach, and reminds me a bit of Talking Heads. “Home” is followed by “Swans On Glass,” which was included on the Gathering Dust 12”, as well as released as a single itself in 1980. This one has more of a fun vibe. “I’m turning around/I’m turning around/I’m turning around.” The CD then concludes with “Incident,” which was the flip side to the “Swans On Glass” single. It is a good punk song, telling of a violent episode: “Old man doesn’t feel/The blow strike/Hits the concrete/Stains it just right/Youth is happy/With the incident/Runs off laughing/Into the moonlight.” All the bonus tracks were also included on the 1992 CD re-issue of Mesh & Lace.

CD Track List
This remastered edition of Mesh & Lace was released on December 6, 2019 through Blixa Sounds.
Posted by Michael Doherty at 11:33 AM