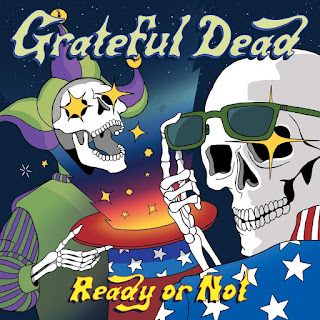 The Grateful Dead released their final studio album, Built To Last, in 1989. In the six years that followed, before Jerry Garcia’s death put an end to everything, the band continued to write and perform new material. We kept waiting for another studio release. But it never came. However, with the release of Ready Or Not, a live album featuring some of that material, we get an idea of what that release might have been like. It features live performances of nine songs from 1992 to 1995. Surprisingly, it contains no Phil Lesh songs, though he contributed several tunes to the band’s repertoire during that time, such as “Wave To The Wind,” “If The Shoe Fits” and “Childhood’s End.”

This album opens with the last song I ever saw the Grateful Dead perform, “Liberty.” It was the encore at the May 29, 1995 show in Portland, Oregon, where I saw Jerry Garcia for the final time. It was also the encore on October 14, 1994, the recording included here. The tune has such a fun groove, one to keep everyone dancing. Jerry’s voice sounds pretty damn good here, which was not always the case in 1994. “I’m gonna find my own way home” were the last words I ever heard Jerry sing, and he puts some power and emotion behind that line in this rendition. “Liberty” is followed by “Eternity,” a seriously cool, jazzy tune that Bob Weir wrote with Rob Wasserman and Willie Dixon (must have been one of the last things Dixon had a hand in writing). This was one of my favorites among the new songs at the time. It was so different from the rest of the band’s repertoire, and could be exciting and provide the space for the band to do some interesting exploring, as they do in the version included here from April 2, 1995. I dig Vince’s work on keys. And Jerry finds some unusual places to take us during the jam. It’s a wonderful rendition. But probably my favorite of all the new songs was “Lazy River Road,” and the version included here from March 25, 1993 has that sweet sad sound I loved so much, and still do love. Jerry’s voice sounds fantastic here. There is something so endearing, so timeless, so meaningful about this song, and it was more like a folk number than the other new material the band was introducing at the time. It was a song I loved immediately, a perfect song for Jerry to deliver. This track is certainly a highlight for me.

After Brent Mydland’s death in the summer of 1990, Vince Welnick took over on keys. He brought some interesting choices of covers for the band to perform, and two originals. Both originals are included on this album. The first is “Samba In The Rain” (the first on the album, that is, not the first he introduced). This was another unusual one for the band, not a favorite of mine, and lyrically a bit weak, but one that was certainly fun to dance to. And it was somehow even more fun when it actually was raining. The version here from March 30, 1995 features a seriously cool jam. The most beautiful and moving of the songs chosen for this release is “So Many Roads,” and this version from June 23, 1992 features some sweet stuff from Jerry both vocally and on guitar. The backing vocals likewise sound sweet and soulful. And the finale of this version is absolutely glorious, making this probably the disc’s best track. “So many roads I know/All I need is one to take me home.”

That’s followed by the first of the two songs that Vince introduced, “Way To Go Home.” I remember being excited the first time I saw the band perform this one, and fans took to it initially, but then it got a bit overplayed. Still, it is one I get in my head fairly often, especially when I am stuck in Los Angeles traffic trying to get home. “It’s a long, long, long, long way to go home.” This version is from June 28, 1992, and features some good vocal work. “Corrina” is one with such a delicious rhythm that we couldn’t help but get into it. We were dancing too wildly to pay much attention to the lyrics. However, the lyrics to this song do provide this collection with its title. “Fade on a downbeat/Ready or not, ready or not.” Interestingly, the version included here is from October 14, 1994, the same show that gives us “Liberty.” That is the only show to be represented twice in this collection. It’s a good long “Corrina,” with some fun jamming.

There are only two Grateful Dead songs that I actually didn’t like back in the day, and both are included here. The first of those is “Easy Answers,” which I remember thinking was lame the first time I saw the band perform it. I’ve seen Bob Weir perform it more recently, and felt a bit kinder toward it then. Listening to this version from September 13, 1993, I remember what I disliked about it. The backing vocals repeating “Easy answers” are awful. This collection then concludes with the song I least enjoyed of all the Grateful Dead’s material, “Days Between.” And, yes, I know I’m in the minority here, but this song always bothered me. Lyrically, it’s fine, I suppose. But musically I find it incredibly frustrating. It builds and builds and never gets anywhere. It feels unfinished. I expect it to break out to some higher plateau, but it just never does. This was particularly irritating when I was tripping. I wanted the song to get somewhere, needed it to. Coincidentally, this track is the only one from this disc that I actually saw the band perform. I attended those four shows in Oakland in December of 1994, and they were the only shows at which I managed to get backstage. Because I was there, I’m glad to have this song released officially. And it does have a passionate vocal performance by Jerry, plus some powerful moments, no question about it.