Brad Vickers And His Vestapolitans: “Twice As Nice” (2019) CD Review 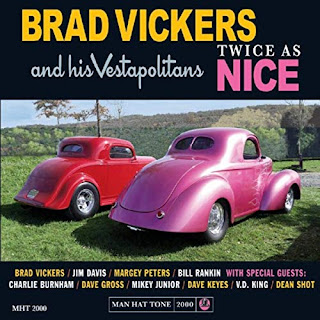 Brad Vickers And His Vestapolitans deliver some excellent, timeless grooves designed to get folks moving and smiling. The music – both originals and covers – is a delicious mix of blues, ragtime, jazz, folk and rock and roll, featuring both male and female lead vocals.  The core members of this band are Brad Vickers on guitar and vocals, Margey Peters on bass and vocals, Jim Davis on tenor saxophone and clarinet, and Bill Rankin on drums. These guys surround themselves with several other talented musicians, and on the band’s new album, Twice As Nice, these include Dave Keyes on piano and organ; V.D. King on baritone saxophone, guitar, piano, organ, upright bass, banjolele and percussion; Mikey Junior on harmonica and vocals; Dean Shot on guitar; Dave Gross on guitar; and Charlie Burnham on violin.

This album begins in the blues, with a cover of Big Maceo Merriweather’s “Worried Life Blues.” Brad Vickers And His Vestapolitans pick up the pace a bit to make it more of a tune to dance to. The band jams on this track, treating us to some great stuff on both guitar and saxophone during the first instrumental section. And then the piano rocks and moves so well in that other instrumental section toward the end, followed by some more totally enjoyable work on guitar. This is a sound that always works for me, a sound that seems to say that life is good. That’s followed by “Mississippi Swamp,” an original number, written by Brad Vickers. It is seriously fun, with a rhythm that shakes and moves. As the title promises, there is a good deal of a swamp sound to this one, but it’s swamp with a delightful pace, something you can dance to. This track features some cool stuff by Mikey Junior on harmonica. All of that is great, but it is that steady rhythm that really drives this track and makes me totally dig it.

“Love Can Win” is another original number, this one written by Margey Peters. It’s a song with a positive message, one I need to hear often these days. We all do, right? “I’ve got something important to say/It gets more urgent every day/Love can win.” Indeed, it is getting more urgent every day, as this nation has become so divided that it seems any common ground has been lost. “Patience, understanding, compassion, respect/We’re all in this together, last I checked/Love can win, love can win.” I need to remind myself that, because it is so damn easy to hate those who support Donald Trump, and often it feels that they deserve nothing but our contempt. But that does nothing good for us, and isn’t going to help. Can they still be reached? Of course, a good message is one thing, but the music has to move you too, and it certainly does here. The track has a pleasant, fairly easygoing groove, and there is some enjoyable stuff on organ. At the end, the line is changed to “Love will win.” Well, all right, I appreciate that optimism. We then return to some classic blues, but with lyrics that work well following “Love Can Win.”  Jimmy Reed’s “Close Together,” here with a slightly slower pace, features these lines: “You know this old world of toil and sin/One little person just can't win/Take the two of us going side by side/Trying to keep each other from being taken for a ride/We gotta stay close together.” I really love what these guys do with this song. I feel transported to an earlier time. Or have they transported that time to us here? Either way, everything is working so well. Check out that sax at the end.

With “Coast To Coast,” this band delivers a good dose of rock and roll. The song’s first lines are “I’d love to see/The land of the free.” Oh yes, and now is the time, before it’s all gone. This is an original song, written by Margey Peters, and is about hitting the road. It is one I’ll be adding to my road trip play list. “The back roads are better because there’s so much more to see.” And, yes, it names several cities (as many of these driving songs do): “Boston, Chicago, New Orleans, St. Lou/We’ll have so much fun that we won’t know what to do.” Ah yes, all good road trips start in Boston. For me, the guitar is the center of this track. I love that section where it takes a delicious lead, the horns adding these delightful touches. The jam then continues with the keys taking over. That’s followed by another original number by Margey Peters, “Twice As Nice,” the album’s title track. This is one of my favorite tracks. It sounds like a glorious ol’ dirty number, with Margey singing “Well, they say a life of virtue/Is the only way to win/You can keep your life of virtue/I prefer a life of sin.” Well, all right then! It’s a fun number, to be sure, and I particularly love the clarinet. A song about gender equality, in which we all get to have a good time! “What’s good for you is twice as nice for me.”

“Red Dust” is an original song that feels poised to strike from its start. It has a steady rhythm that seems to forebode danger, with some great bluesy touches on guitar over it. “Not being white was the only crime/Hate was never sentenced to do the time/What’re you going to do about it?/Don’t you want to talk about it?” Yeah, this one has something to say, and it gets you in its grasp before saying it. This one was written by Brad Vickers. That’s followed by “Everything I Need,” written by Margey Peters. The line that stood out for me the first time I listened to this track was “It’s hard to believe the condition the world is in.” Indeed. Brad Vickers And His Vestapolitans then give us a rendition of “Stealin’ Stealin’” that is a whole lot of fun. This is a song I first heard on an early recording by the Grateful Dead, and is one I’ve always enjoyed. Margey Peters sings lead, and adds some playful touches. For example, listen to the way she delivers the line “He’s a married man, he comes to see me sometimes.” Mikey Junior plays harmonica and provides some backing vocals on this one. That’s followed by another fun number, a cover of “Look A There Look A There,” which features more nice stuff on harmonica by Mikey Junior. The lead on guitar has a great classic and loose vibe. The disc concludes with “Brooklyn Evenings,” a song written by Margey Peters. This track has a relaxed, easygoing vibe, and includes some wonderful work by Charlie Burnham on violin. “I’ve been thinking/Been remembering/Recollecting on the times gone by/Things were different, maybe better.”

CD Track List
Twice As Nice was released on October 1, 2019.
Posted by Michael Doherty at 2:32 PM