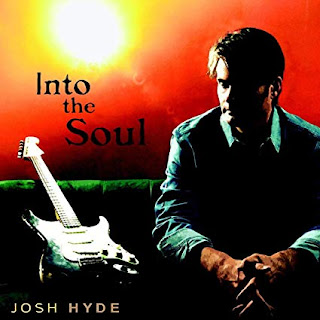 Josh Hyde’s new album, Into The Soul, has such a good, honest sound that it feels like an antidote to the lies, corruption and fraud that pervade our country these days. This disc, which is Josh Hyde’s second, following Call Of The Night, features all original material, much of it with a delicious bluesy sound. Joining him on this release are Joe V. McMahan on guitar and vibraphone (he also produced the album), Ron Eoff on bass, Derrek Phillips on drums and percussion, Jimmy Wallace on keys, and Chris Lippincott on pedal steel.

Into The Soul gets off to a great start with “Rocking Chair,” a fun tune with some delightful work on both keys and guitar, as well as a good groove with some totally enjoyable percussion. And I dig these lines: “I ain’t got much money to take you far/About to spend the next month’s rent looking at you in this bar.” The song develops into a nice jam too, and it’s during that section that we get the track’s best stuff on keys. The song’s end feels rather sudden. It’s followed by “Smile,” which is more of a rock song, but still with some soul. “You asked me where I’m going, girl, all I know I’m looking for a smile.” Ah, sometimes smiles are hard to come by these days, it’s true. But this album might just do the trick. “For You I Ache” is a mellower, pretty tune about being lost after a relationship ends. Then “Lover’s Curse” features some really nice work on organ. And there is a decent, brief instrumental section, led by guitar.

“The Edge Of Love” is a cool bluesy track, with a bit of funk to its groove. “Lay my head on a lonely bed/Twenty-eight and I feel half dead/You know I’ve got a heard of lead/But I think I’m on the edge of love.” I appreciate that sort of optimism. We all need it these days to keep going, having to think we are the edge of something better. Right?  That’s followed by “Can’t Let Go,” which has something of a 1970s rock vibe, a sound that takes me back to my childhood. Is that what makes me like this track so much? I’m not sure, but I’m definitely enjoying this song. Here is a taste of the lyrics: “I should’ve held your heart, babe/I should’ve been your man/I should’ve kissed you harder/I should have had a plan/These things, they never leave my head.” It’s probably my favorite track of the album. Then “The Key” features a soulful vocal performance.

“Down On Bourbon Street” has a kind of laid-back vibe, which I like, but which is a bit surprising for a song about New Orleans, especially a song about Mardi Gras. Usually those songs are more raucous and wild, as something about that city and that holiday inspires folks to get a little nutty, a little loose. But I like the relaxed feel of this song, the music and the vocal delivery, and it works, for this song is about memory, and sets the couple apart from what is going on around them. “Holding you, oh so tight/We ran through the streets/The clowns and the freaks/Right behind us, what a sight.” That’s followed by “All You Need Is Soul,” which begins in a mellow place, with some nice bluesy guitar work. When it kicks in, it has a 1970s rock thing happening. “Everywhere you go there’s music/And you don’t need to pay for the show/All you got to do is choose it/All you need is soul.” Then “Call My Name” begins with a rhythm that always appeals to me, probably ever since my early childhood in the 1970s when I heard it on “Sesame Street.” Anyway, this track becomes a good rock song. “Well I woke up, with your whisper sweet in my ear/Then we broke up, but your smile and your smell are still here.” The disc concludes with “Reasons Why,” a tune with a mellow, late-night vibe, a gentle and soulful ending to the album.