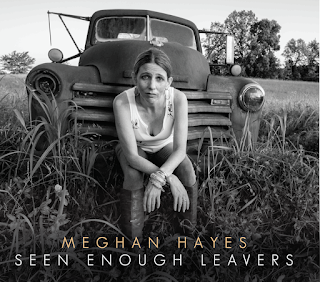 Meghan Hayes is a talented and engaging singer and songwriter based in East Nashville, her music combining elements of folk, country and pop. Her new album, Seen Enough Leavers, is her third, following Snow On The Waves and Go And Give The Guard A Break. A lot of time has passed since the release of those first two albums, and during those intervening years Meghan Hayes clearly went through some stuff. This new album follows the end of a long marriage, and in some ways feels like a return to the world, or perhaps was itself the way back. The music here is passionate and sincere, and features some excellent lyrics. Joining Meghan on this album are Audley Freed on electric guitar and 12-string acoustic guitar; Goffrey Moore on acoustic guitar; Thayer Sarrano on pedal steel and piano; Dex Green on bass, guitar, piano, organ, mellotron and backing vocals; and Tommi Rautiainen on drums. There are also some guests on certain tracks.

Meghan opens her new album with “Georgette,” which begins as a simple and haunting folk song, and then starts to build from there, featuring some nice work on pedal steel. “One light bulb is enough to burn this lamp, Georgette/Start burning two or three, you’ll drown yourself in debt/You like to say we’re dying but we ain’t dead yet.” That last line grabs me every time I listen to this disc. It’s an arresting line, full of sadness and hope, characteristic of the style and poignancy of Meghan Hayes’ lyrics. That’s followed by the album’s title track, “Seen Enough Leavers,” which has a faster pace and a more lively sound, but still with a certain haunting aspect to the vocal performance. Something about her voice takes hold of me. And the older I get, the truer these lines become: “Time’s the fastest thing I know/It’s run away with everything I’ve had to show.”

“Burley” features another striking vocal performance, as well as more moving work on pedal steel. “Plenty of people want to call this suicide/But you can’t kill something that ain’t there.” That’s followed by “Potholes,” an interesting, unusual song. The line that stood out from this track the first time I listened to this disc was “The first fucking Noel fills my shopping cart.” That’s a great line. But again, her songs are filled with excellent lyrics. Take these, for example: “Year turns, I can’t learn/The simple equation to force your return/The half dozen reasons I made you squirm.”

“A Birthday In The Pawnshop (Morristown)” is one of my personal favorites. In fact, even before I first put this disc on, I was digging the track’s title.  Check out these lyrics, which open the song: “Lightning turned the leaves on the trees around/Every night that summer down in Morristown/Thunder shot curses across the sky/By morning not a single blade of grass was dry.” Those lines do such a great job of giving us a feel of the place, setting the tone. Here is another excellent line from this one: “And tried on lives we’d never see.” This song has a vibrant sound, though its story is told from the perspective of someone who is dead. Apparently, this song was released on a compilation back in 2006, The Other Side: Music From East Nashville, though on the track list for that disc it is titled simply “A Birthday In The Pawnshop.” Also, just so you know, a video for this song has been released.

Another track that stands out for me is “Next Time Around,” a song about a home that is no longer a home after the end of a relationship. “You swore we’d die in this place/I bet the people we bought it from/Once said exactly the same.” It’s a sad song, of course, but somewhere deep in there, there is still hope, “Maybe we all get more chances the next time around.” Yeah, it’s not much, but we have to cling to whatever scraps of hope we can get these days. Mando Saenz joins Meghan on vocals on this one. The album concludes with “Story Of My Life,” with Meghan on acoustic guitar, accompanied only by Derry DeBorja on accordion. “I’ve been offered nothing/Nothing will suffice.” The album ends with the line “That’s the story of my life,” and indeed, listening to this disc, it feels that we’ve been treated to a very personal experience.

CD Track List
Seen Enough Leavers is scheduled to be released on CD on May 31, 2019.
Posted by Michael Doherty at 9:47 PM