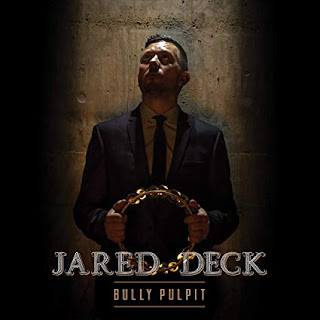 In that darkest and most foul of years, 2016, Jared Deck released his first album. Yes, even though the year featured a whole lot of death (including that of democracy and dignity), it was actually an excellent year for music, featuring some fantastic releases. Now Jared Deck has followed that self-titled debut album with Bully Pulpit, a disc that has so much soul, so much passion that it feels like a living, breathing entity bursting forth from your stereo to physically lift you up. What a powerful voice! And the material here is mostly original, written or co-written by Jared Deck. He has a lot of folks backing him on this album, including Clayton Roffey on electric guitar, Brandon Cink on bass and acoustic guitar, Isaac Stalling on slide guitar and rhythm guitar, Jim Robinson on piano and keyboard, Dan Walker on organ and piano, and Gabriel Pearson on drums. Chanda Graham and Myra Beasley provide vocals on most tracks.

The album opens with a lively rendition of the gospel song “I Don’t Know What You Come To Do,” which is also known as “Praise His Name.” It comes thumping in, immediately pulling you off your seats. This version has the line “I came to rock and roll,” and oh yeah, I believe it. After that, there is a cool section led by percussion. Then he tells us, “I want to make you scream,” but you know he means that in the nicest possible way. That’s followed by “Money Back,” a song with soul, with some blues, but also with a whole lot of rock energy. This one also features a horn section – Floyd Haynes on tenor saxophone and Kirk Palmer on trumpet. And Dan Walker delivers some good stuff on organ. In addition to that, there is a tremendous energy to the vocal performance, as Jared Deck asks that eternal question, “Can I get my money back from the girl that stole my heart?” He then changes gears with “Where I Fall,” a heartfelt country number featuring Hank Early on pedal steel. “He used to believe that love was real/He used to believe that guns could heal/He wants to accept that God forgives/But he knows the blood ain’t his.” Yeah, this song has some really good lyrics. “But you can’t drink away the past/Leave your demons in the glass/She wants to believe that love can last.” This song has that feel of looking into a glass and hoping to find answers. And, who knows, maybe there are some here. “In your arms is where I fall.”

“Great American Breakdown” is my favorite song title of this album, and Jared’s vocals come at you with the energy of Little Richard. “I ain’t the devil, just the devil you know.”  This is a song we can relate to and sink our teeth into, while we still have teeth. America has failed, and now it feels like Robert Mueller failed us. Every time we hope the end is in sight, it just slips away, and things actually get worse. Would someone please put an end to Donald Trump and his racist gang of assholes? I don’t even recognize this country anymore. “We’re comin’ in hot.” Okay, the other great song title of this album is “Sometimes I Miss Being Lonely.” It’s also a kind of gorgeous song, with a soulful sound. Jared Deck delivers another powerful vocal performance, and I love those backing vocals too. So good.

“True Believer” comes on strong, and features the horn players. Floyd Haynes plays both saxophone and clarinet on this one. That glorious and totally fun instrumental section halfway through comes as a delightful surprise. I was digging the tune before that, but that was the moment when I got really excited. And then I dig those drums. There is a touch of big band sound to this one, which I love. But mainly it’s gospel, with a fire in its belly, and you can dance through the flames that leap up around you. Then some delicious blues piano gets “There’s A Leak In This Old Building” going. This one takes on a standard blues rhythm, but there is more to this track than that. It builds nicely, and again, I dig those gospel backing vocals. The album then concludes with “Over And Over,” a song that has a folk base on acoustic guitar, with Jared Deck’s voice rising above it, soaring above it, with a power, a command, and yet a heartache. You just need to hear this guy sing. Seriously. “Now I see the past with no fear of the future/’Cause I know the pain can help me see clearer/But just when I think that I can move forward/Then it comes back along, and just like a song, plays over and over.”