Mindi Abair And The Boneshakers: “No Good Deed” (2019) CD Review 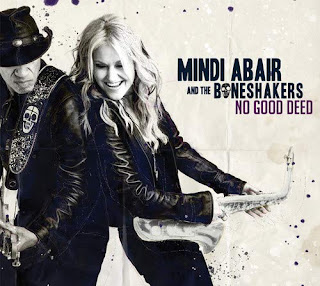 Mindi Abair is a vocalist and saxophonist who has been releasing albums for two decades, as well as performing with other artists. She has moved from pop to blues rock, joining forces with The Boneshakers, led by guitarist Randy Jacobs, whom you might know from his work with Was (Not Was). Their new album, No Good Deed, is the group’s third studio release, following last year’s holiday album All I Got For Christmas Is The Blues. This new release features mostly original material, along with a few interesting choices of covers, and was recorded in only five days. The band is made up of Mindi Abair on vocals and saxophone, Randy Jacobs on guitar and vocals, Rodney Lee on keys and vocals, Third Richardson on drums and vocals, and Ben White on bass and vocals. There are also a few guest musicians on certain tracks.

The album opens with one of its covers, “Seven Day Fool,” a song written by Billy Davis and originally recorded by Etta James. This rendition by Mindi Abair And The Boneshakers is a bluesy rock number, coming straight at you, without any nonsense, but with some surprises. Those synth strings sounds, for example, are an interesting element. Then toward the end, suddenly the saxophone shouts out, which is wonderful. And there is a bit with hand claps that seriously reminds me of a moment from “Born To Hand-Jive” in Grease. Yeah, it’s a fun track. Then “No Good Deed Goes Unpunished” begins with a solid beat, and has a delicious rock feel almost immediately. Mindi sings about music making the world all right, but that a life in music brings the troubles of men who are less than faithful and friends who use you. But, oh, check out that guitar. And then that sax! These guys seem to be able to handle the troubles. “I’m just trying to make a difference, so get out of my way.”

The group’s cover of “You Better Run” comes thumping in with a mean groove, with the saxophone adding excellent little thoughts. Actually, the more I listen to it, the more I think it’s those touches on saxophone at the beginning that establish this rendition as something special. At any rate, it’s a really cool take on the song, which was originally done by The Young Rascals, and later covered by Pat Benatar.  Mindi Abair And The Boneshakers then slow things down a bit with “Sweetest Lies,” Mindi singing “I believe what you say/When you look at me that way.” Ah, but is she really vulnerable? The vocal performance here is sometimes sweet, sometimes raw, sometimes powerful. “Is it wrong, is it right/That I let you make me cry/I can’t leave, I know why/Because you tell me the sweetest lies.”

Mindi Abair’s version of “Good Day For The Blues” has a party beat, with a bit of a New Orleans vibe, and features nice stuff on keys. It seems that every day in these dark times is a good day for the blues. Or, at least, every day during this horror show we do have the blues, good day for it or not. Then there is a good lead on saxophone halfway through this track, and we get a kind funky little jam, which I appreciate. That’s followed by “Mess I’m In,” which has a nice groove. “I should straighten up around here/Don’t know where to begin.” Oh man, I can relate to those lines. Yeah, it’s not just a figurative mess, but a literal one. “Where did this all begin/Everything’s under my skin/When will it ever end/This mess I’m in.”

“Bad News” is blues with a cool, sly vibe, and Mindi Abair’s vocal delivery has a sexy intimacy. And that horn sounds just perfect, creating a vivid atmosphere. Nick Lane plays trombone on this one. This is a delicious track, one of my favorites. “The bad news has arrived/It’s closing time.” That’s followed by “Movin’ On,” which has a heavier rock sound. Then “Who’s Gonna Save My Soul?” is a gorgeous, soulful, and moving song. “I gave every breath to you/Saved none for me.” This one features more excellent work on saxophone. The album concludes with a cover of Ike & Tina Turner’s “Baby, Get It On,” a rock and roll song with a good amount of energy. Third Richardson joins Mindi on lead vocals on this duet, and Lee Thornberg is on trumpet and trombone, and Paulie Cerra plays tenor saxophone.

CD Track List
No Good Deed is scheduled to be released on June 28, 2019 on Pretty Good For A Girl Records.
Posted by Michael Doherty at 4:26 PM