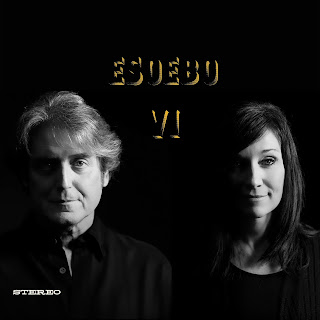 Look, I know we all hate the state of Georgia right now, because of its backward, dangerous, and completely disgusting politics. I personally think the Republican Party should be utterly destroyed. But I know for a fact that there are some good people in Georgia. They are concentrated in the Atlanta area, so you can go on hating the rest of the state (and all of Alabama, of course). But there is good music coming out of Georgia, like the duo of Chuck McDowell and Gail Burnett, known collectively as ESOEBO. Gail plays cello, so that right there proves she’s a good person. Anyway, ESOEBO – the name is an acronym for “Eclectic Selections Of Everything But Opera” – is putting out a new album, VI, featuring all original material, written or co-written by Chuck McDowell. Joining them on this release are Phil Madeira on guitar, lap steel, piano, and organ; Will Kimbrough on guitar and mandolin; Chris Donohue on bass and guitar; Bryan Owings on drums; Dennis Holt on drums; and Roland Barber on trumpet and trombone.

The album opens with “Airplane,” which is kind of adorable, almost like a children’s song, but also with a style from an older era, the vocal line at times reminding me a bit of “Makin’ Whoopee.” Here is a taste of the lyrics: “We’re going on an airplane/Way up in the sky/We’re going on an airplane/Hoping we won’t die.” It’s a totally enjoyable song, with some nice touches on horn. That’s followed by “Sweet Talk,” a somewhat playful tune which has a relaxed vibe. “She’s got curves/Where curves are supposed to be/Shiny white teeth/She’s smiling right at me.” Then “I Don’t Trust Her” is an odd sort of love song, in which Chuck sings, “The more she drinks, the better I look,” then “Well, I don’t trust her when she’s been drinking.”

One of my personal favorite tracks is “Expressions.” It begins with some delicious, light work on piano, and is a delightful love song delivered as a wonderful duet. “Don’t need to see that ol’ Grand Canyon/I’m happy sitting here, holding your hand and/Don’t need to travel to the Great Wall of China/I’m happy here just sitting right beside ya.”  So nice, and this one features some enjoyable percussion. Though of course I still want to travel to some of the places mentioned in the song with the woman I love, like to Rome. That’s followed by “Baby, I Love Your Shoes,” a country rock and roll number. I’ve never quite understood the shoe thing, but I like this playful song, particularly the line that hints at the man’s crossdressing, “I’m just very grateful that we both have the same foot size.” (Years ago, when I was living in Oregon, the band I was in had a song with similar angle, “One For Her Clothes.”)

ESOEBO then turns more serious with the emotionally engaging “Hurricane,” which has a darker, more somber tone. I’m particularly fond of Gail’s work on cello on this track, but this one also features what I think is Chuck’s best vocal performance of the album. “Looking back when it’s too late/Got to move, can’t hesitate/And I’m leaning into the eye/Well, I’m praying I don’t die.” His delivery has an honesty, a straight-forward aspect that is effective. That’s followed by another serious-sounding and powerful number, “Still Be Me,” which has a beauty, their voices sounding so good together. “If ashes turn to ashes/And dust returns to dust/I’ll still be me/I’ll still be me.” This is another of my favorites.

“A Woman’s Touch” is a mellow and kind of pretty song. (On the CD case it is listed as “A Women’s Touch,” but I’m assuming that’s a printing error). “Give our lives if we must/It should be love, but it may be lust/Every man craves a woman’s touch.” The album then concludes with “I’ll Follow The Sky,” a strong track. Check out these lines: “Trying to shake off what’s behind/Unsure of what’s ahead/Right and left both look the same/There’s demons I’ve got to shed.”