Christina LaRocca: “These Are My Whiskey Dreams” (2019) CD Review 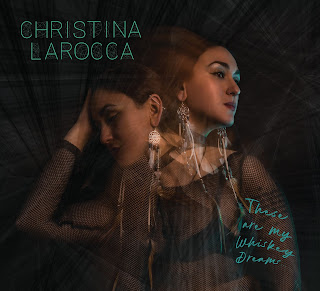 Christina LaRocca is a singer and songwriter based in Los Angeles, her music touching upon blues, pop, reggae, folk, country, and soul. But whatever musical realm she dives into, her voice remains the driving force of the songs. She has power and passion in that voice. You can hear that passion on every track of her new release, These Are My Whiskey Dreams. Joining her on this album are Gene Micofsky on guitar and bass, Leanne Bowes on bass, Dylan Hayden Cooper on drums, Zak St. John on drums, Jake Pinto on piano and organ, and Andros Rodriguez on synths, along with some guests on certain tracks.

The disc opens with “A Man Like You,” which was written by Christina LaRocca and Andros Rodriguez. There are blues influences as well as country elements, and the whole thing is wrapped in a wild, lively, cool sound that immediately grabs you, its percussion giving you the feeling of being out on the road somewhere. Christina’s vocal approach is like that of someone who absolutely has to get her point across, and will hold your attention until she’s done with you. “And by your side I swear I will stand/Because I’ve never loved a man like you.” Then suddenly the song takes an unexpected turn toward reggae. Then we’re in a modern pop land with “Capsized,” complete with turntable scratch sounds. But the power to her voice is the same, and that’s the draw. “Don’t you know these are dangerous times/Count your blessings every night, pray you can read the signs.”

Christina then takes another turn, this time toward folk, at the beginning of “Home,” but with a steady beat. And the song builds from there, and features another passionate vocal performance. I’ve mentioned this a few times, but I need to make a mix CD of songs titled “Home” (why haven’t I done that yet?). I don’t think I’ve encountered a bad song with that title. After you listen to this song, check out songs titled “Home” by artists like Ellis Paul, Erica Blinn, Michelle Malone, The Evangenitals, The Spongetones, The Ides Of March, Joe Walsh, James Houlahan, Janiva Magness, Iggy Pop, Fernando Perdomo and Anton Fig. Here is a taste of the lyrics from Christina LaRocca’s “Home”: “I miss the world that didn’t feel so small/But I can’t look back/I won’t turn around/Not a day goes by that I don’t miss my home.” That’s followed by “Hard To Trust In Love,” which begins softly and features Simone Vitucci on cello, an instrument I am always happy to hear. This is a pretty and emotionally engaging song, and Christina’s vocals are really the focus here. “It’s been hard to trust in love/Especially when she says time is going to heal up all the cuts.” In the song’s second half, it begins to build and then suddenly bursts into another level before returning to its softer beginning.

While Christina LaRocca flirted with a reggae vibe in “A Man Like You,” she goes more fully into the reggae realm with “Smoke Marijuana.” Yeah, I suppose it’s an obvious choice for a song touting the joys of pot, but of course it works. The main rhyme is a bit weak and silly: “Smoke marijuana/Babe, I know you wanna.” This was the first song I heard from this album, back in mid-April, and it didn’t grab me the way these other tracks later did. But it’s still an enjoyable tune, with a good groove. That’s followed by “Whiskey Dreams,” a slower, yet exciting song with a lot of soul and a good opening line: “You only buy me flowers when you are sorry.” Christina belts out some of the lyrics of this song, which is sort of the album’s title track. Her fantastic vocal performance here helps make this one of my personal favorites. Then “Hearts Beat Faster” is a pop song with a dance beat. That’s followed by “Breathe,” a cool, groovy tune with soul and power. “It’s always a bloody fight, the constant battle between my heart and mind.” Christina’s voice is a physical force that can shake giants and foundations and cause earthquakes. As such, it may be considered a danger for her to remain in Los Angeles.

Only eight tracks are listed on the CD case, but there are actually ten. The last two aren’t hidden; they are presented as separated tracks. The first is “Child Of The Sun,” which has a nice groove and yet another soaring vocal performance. The lines “If I can get it all down before daylight/I’ll get some sleep tonight” remind me of lines from the Grateful Dead’s “Friend Of The Devil,” “If I get home before daylight/I just might get some sleep tonight.” And then “I Am Only Human” has something of a classic rhythm and blues sound, which I dig. “I’m only one person/One choice/But together we have voice/To choose love over hate/Show compassion, educate/Use less, don’t waste/Before it’s too late.” These final two songs were released digitally on November 3, 2017.

CD Track List
These Are My Whiskey Dreams is scheduled to be released on July 12, 2019.
Posted by Michael Doherty at 10:17 PM