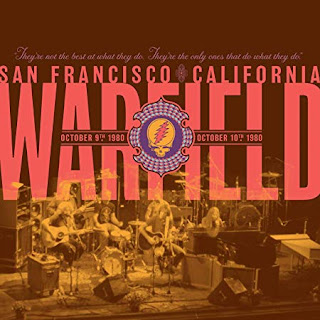 I enjoy a lot of different music, but if asked to pick a single favorite song, my choice would be “Ripple” by the Grateful Dead. And seeing how there are two versions of it on the new Record Store Day release, The Warfield, San Francisco, CA 10/9/80 & 10/10/80, that two-disc set was my number one pick that day. I happened to be in Massachusetts for Record Store Day this year, and so limited my purchases to just a few things so I wouldn’t have to worry about getting a lot of records back to L.A. Since this Grateful Dead release was available on both vinyl and CD, I decided to go with the CD (it fit inside my carry-on). In 1980, the Grateful Dead did a series of shows where they played three sets instead of their standard two, with the added set being acoustic. Most of these shows were performed at The Warfield, in San Francisco, and some of the material from those shows ended up on Reckoning, one of my favorite Grateful Dead albums. Now two of those acoustic sets are available as a special Record Store Day release.

The first disc contains the first set from October 9, 1980. The band opens this one with a sweet, somewhat relaxed rendition of “Dire Wolf.” It almost has the sound of folks seated around a fire, singing and playing, perfect for the song’s lyrics. They follow it with a country song written by Bill Browning, “Dark Hollow,” and Bob is sounding good. “I’d rather be in some dark hollow/Where the sun don’t ever shine/Than to be home alone/Knowing that you’re gone/Would cause me to lose my mind.” Ah yes, and yet the song has a cheerful sound, delivered as a traditional-sounding folk tune. They continue in the traditional folk vein with a nice rendition of “I’ve Been All Around This World.”

Bob Weir then counts off the beginning to “Cassidy,” one of my favorite Grateful Dead songs. I’ve seen Bob deliver some fantastic versions of this one over the years, and though this is an acoustic rendition, the guys still jam on it a bit, and there is some wonderful stuff on guitar. It is certainly a highlight of this disc. Jerry follows that with a thoughtful, delicate version of “China Doll,” which features Brent Mydland on harpsichord. Things then turn more playful with “On The Road Again.” It’s a fun rendition, with a sudden end. There is a bit of goofy banter, and then Jerry leads the band into “Bird Song.” It’s certainly not the best version of “Bird Song” I’ve heard, but the jam does get good, with moments where you can just let it carry you off into those wonderful places where the Grateful Dead seem to dwell. And Jerry’s vocal delivery has a sweet, gentle quality. Bob follows that with “The Race Is One,” another fun, playful number, with some nice stuff from Brent on piano. I love Jerry’s beautifully intimate vocal delivery on “Oh Babe, It Ain’t No Lie,” making that track another highlight of the first disc. Then, as the band starts “Ripple,” Jerry says, “Feel free to sing this song if you’d like.” Oh yes, I often find myself singing this song. And this is a beautiful, sweet rendition. “Let there be songs to fill the air.”

The second disc contains the first set from the next night, October 10, 1980. And Bob starts by joking, “We’re the warmup band.” They kick off the set with “On The Road Again.” And yeah, they played that one the previous show, but the band had fewer songs to draw from for these acoustic sets, and so there was a certain amount of repetition during this run of shows. But of course the Dead never really did a song the exact same way twice, so by that reasoning, there was never any repetition. They followed “On The Road Again” with a beautiful and moving rendition of “It Must Have Been The Roses,” and then an enjoyable, somewhat mellow version of “Monkey And The Engineer.”

Jerry delivers an excellent “Jack-A-Roe,” and I think it’s this version that appears on Reckoning (an album which was also released as For The Faithful). Here Jerry shows how adept he was at tackling those old folk tales. I love hearing him sing folk songs, and I’ve been enjoying that three-disc expanded edition of The Pizza Tapes that he recorded with David Grisman and Tony Rice, where he sings tunes like “Man Of Constant Sorrow” and “Little Sadie.” Bob follows “Jack-A-Roe” with “Dark Hollow,” another tune that had been played the night before. This version, to my ears, is the better of the two. The vocals sound great, and the song has a sweet vibe and moves along well. Jerry then eases the band into a version of “To Lay Me Down” that is gorgeous and intimate, pulling you near into a friendly embrace, as if to say things will be all right, and then letting go. Listen to those harmonies. That’s followed by probably the most interesting song choice of the set, an instrumental version of Bob Weir’s “Heaven Help The Fool,” played without the drummers. “Bird Song” follows, and features some surprising guitar work during the jam. Seriously, it’s unlike other versions I’ve heard, and it’s that stuff on guitar that makes this version worth listening to. This set, like the previous one, concludes with a wonderful version of “Ripple.” Okay, yes, all versions of “Ripple” are wonderful. “If I knew the way, I would take you home.”