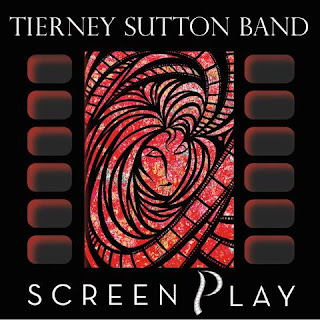 In general, I am not a fan of musicals. That being said, I’m completely bonkers about Grease, and the fact that Tierney Sutton Band covers two songs from that film on ScreenPlay is what got me interested in this new release. As the title suggests, this album features music from various films, including Breakfast At Tiffany’s and The Wizard Of Oz, in addition to Grease. The music is great, and the band certainly puts its own spin on these well-known songs with some interesting and sometimes surprising arrangements. The Tierney Sutton Band is made up of Tierney Sutton on vocals, Christian Jacob on piano, Kevin Axt on bass, Trey Henry on bass, and Ray Brinkler on drums and percussion.

The album opens with “The Windmills Of Your Mind,” a song from The Thomas Crown Affair, winning the Oscar for Best Original Song. This rendition by Tierney Sutton Band is strangely haunting at the beginning, with that steady work on snare and Tierney’s absolutely gorgeous vocals, and those wonderful touches on piano. Then, when it comes in, that bass has power. This is an unusual and gripping rendition, one of the best I’ve heard, an excellent start to the disc. That’s followed by a gentle and yet intriguing rendition of “Moon River,” from Breakfast At Tiffany’s. Again, the bass plays a prominent part here. That song is coupled with “Calling You,” a song from Bagdad Café (a film which I still haven’t seen). It has been covered by several artists since the late 1980s. This song has its own distinct power, particularly in the vocal approach, and the transition from “Moon River” to “Calling You” is seamless. Then, toward the end, Tierney Sutton returns to “Moon River.”

The bass races along at the beginning of “On A Clear Day (You Can See Forever),” and when the song kicks in, it is the piano that is the star of this breezy, delicious rendition. That instrumental section with the piano leading the way is wonderful. That’s followed by “What Are You Doing For The Rest Of Your Life?” from The Happy Ending. Somehow I’ve missed this film, though I’ve heard the song before. After being drawn into Tierney Sutton Band’s version of the song, I looked up the movie, and it sounds like something I should check out. Anyway, this track features a beautiful vocal performance, supported by some nice work on piano. “All I ever will recall of my life/Is all of my life with you.” Then “I’ve Got No Strings” opens with percussion, and features Serge Merlaud on guitar.

Probably the biggest surprise for me is Tierney Sutton Band’s take on “If I Only Had A Brain.” This band delivers a totally fun version, with a great, catchy groove, establishing a cool vibe straight away, with finger snaps and even a bit of scat. I absolutely love their take on this song, giving me a whole new appreciation for it. I didn’t expect this track to be a stand-out, but it turns out to be my favorite, and it just gets cooler and cooler as it goes. I love the bass! And actually there are two bass players on this track, Kevin Axt on electric bass and Trey Henry on acoustic bass. This song often gets stuck in my head, and I hope from now on that when it does, it is this version that my brain decides to play. That’s followed by “The Sound Of Silence,” with Tierney Sutton Band giving us an unusual take on this song too, beginning with a full sound before than paring things down. While “The Sound Of Silence” was featured in The Graduate and appears on its soundtrack, it wasn’t written for that movie, and in fact was on two Simon And Garfunkel records prior to that film’s release.

As I mentioned earlier, what aroused my interest in this release was the inclusion of two songs from Grease. And as this album is a celebration of music from films and not the theatre, the two songs the Tierney Sutton Band chose are ones that were in the film but not in the original play. The first is the beautiful “Hopelessly Devoted To You,” this version having something of a late-night vibe, in part because of the work on percussion. There is a nice instrumental section, led by piano. I really like this rendition, though perhaps because of its late-night vibe, the line “But now there’s nowhere to hide since you pushed my life aside” lacks some of the power of the original. That’s followed by the second of the numbers from Grease, “You’re The One That I Want.” In the film, it is a duet. Here, Tierney Sutton handles the vocals on her own, one of the aspects that give this rendition a different vibe from the original. This version also features some cool work on percussion. Interestingly, it’s followed by a song that is presented as a duet, “How Do You Keep The Music Playing?” from Best Friends, with male vocals provided by Alan Bergman. Originally it was James Ingram and Patti Austin, with James singing the song’s opening lines. Interestingly, this rendition begins with Tierney delivering lines from partway through the original version, and she delivers them a cappella. The song has a pretty, delicate feel, particularly when the piano comes in.

The Tierney Sutton Band delivers a wonderful, pretty rendition of “It Might Be You,” from Tootsie, featuring more good work from guitarist Serge Merlaud. The album then concludes with its most recent song, one co-written by Christian Jacob and Tierney Sutton, “Arrow,” from the film Sully. This is a song I hadn’t heard before, from a film I haven’t seen (after suffering through Changeling, Gran Torino and American Sniper, I decided to take a break from Clint Eastwood-directed movies). The soundtrack to that film was composed by Christian Jacob, The Tierney Sutton Band and Clint Eastwood. “Arrow” is gentle, pretty and loving, featuring some nice work on piano.

CD Track List
ScreenPlay is scheduled to be released on May 17, 2019 on BFM Jazz.
Posted by Michael Doherty at 12:37 PM