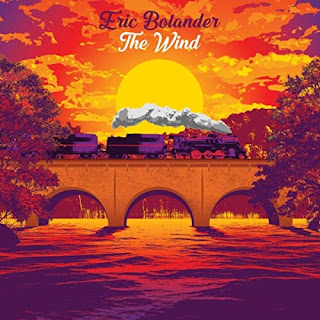 Eric Bolander is a singer and songwriter (and teacher) based in Kentucky. His new release, The Wind, is actually an expanded version of an earlier release from 2017. It features mostly original material, with one interesting cover. The music is in the general folk realm, with a good deal of soul in its delivery. These are emotionally engaging tracks. Joining him on this album are Ben Caldwell on drums and backing vocals, Seth Murphy on cello and bass, Trenton Jenkins on banjo, and John Ferguson on keys and backing vocals, along with a few special guests on certain tracks.

The disc opens with “Closer To That Flame,” which has something of a bluesy folk vibe, but with a steady and prominent beat that puts it more in the rock world. However, the vocals are really what give this track its power. It’s not just those moments when he belts out the lyrics, but when he draws us near with his voice. There is a palpable anxiety to this song, an uncertainty but also a resiliency. That’s followed by the album’s title track, “The Wind,” which has more of a folk sound, with banjo. But while the banjo is usually a cheerful instrument, here it manages to add to this song’s beautifully sad sound.  “Why don’t the wind blow me away/Why don’t the wind blow me down.” And of course I love the cello. This is a moving and completely engaging song, with a southern flavor to its sound. “But I’m here to stay.”

“Oh Lord” has an intimate feel at the start, the acoustic guitar working to pull us in. It is a song of loss and despair, yet of strength, like a cry out to the universe. And that cello is so damn good. “Oh Lord,” by the way, is one of the songs that wasn’t included on the original release. That’s followed by “Fly,” another compelling and beautiful track, with some wonderful vocal work as well as more good stuff on banjo. “I hold the light of my life/I hope that I’ll get it right/Get it right/And let her fly.” This song is about the birth of his daughter, and while I often find that songs written about one’s children are among the weakest of an artist’s work, this particular tune is one of my personal favorites of the album. It features Jeni Bolander on backing vocals. There is a second version of this song, titled “Fly (Ava’s Song),” at the end of the album. This one has a different sound, delivered on piano, and is also truly gorgeous and moving.

The album’s only cover is Prince’s “Purple Rain.” I’ve heard several phenomenal covers of this song over the years. Among the best versions were live performances by Martin Sexton and The Evangenitals. This one is also up there among the best. I like the presence of banjo, giving the song a different vibe. And those strings are gorgeous. Then toward the end we get the addition of a wonderful saxophone part. That’s Matthew Polashek on saxophone. What a great rendition of this beloved song. It’s followed by “The Road,” another strong and moving track. “Time got a hold on me, it won’t let go.”  Then “Maybe I” is an excellent and soulful number, with a wonderful and effective vocal performance, probably the best on the album. “Sure don’t know what I was thinking/When I threw it all away/So many years in the making/Like a damn fool I played/The game is almost over/Hate to see you walk away/I’m on my own path now/I hope to see you again someday.” J. Tom Hnatow adds some good work on pedal steel on this track. This is another of my favorite tracks. Then “Whisper” begins with some nice stuff on acoustic guitar. “Let out a scream for no one to hear/Words fall like the passing rain.” This one kicks in with a force partway through, to become a bluesy southern rock number. That’s followed by “Ghost,” the other song not included on the original version of this album, and another to feature a strong vocal performance. It also features more moving work on cello. “A heavy load upon my mind/Letting go one more time.”