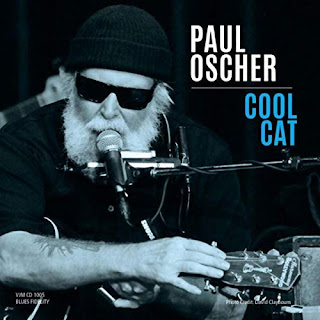 Paul Oscher has been playing the blues for several decades now, including a stint in Muddy Waters’ band. He’s the real deal, as they say, and he proves it again (not that he needs to) on his new album, Cool Cat. The album contains mostly original material, written by Paul Oscher, though the music will feel familiar to you. That’s because Paul manages to tap directly into that rich blues vein, where the heartache and bliss of the blues live. Of course, there is another reason why a couple of these songs might be familiar to you – they were included on an earlier release, 1996’s The Deep Blues Of Paul Oscher. Different versions, of course. Joining Paul Oscher on this new release are Johnny Ace on bass, Sarah Brown on bass, Chris Alcaraz on bass, Kid Anderson on bass, Russell Lee on drums, Ernie Durawa on drums, June Core on drums, Mike Schermer on guitar, Mike Keller on guitar, Eric Burnhardt on baritone saxophone, Tom Robinson on tenor saxophone, Tomas Ramirez on tenor saxophone, and some guest vocalists.

It took about three seconds before I fell in love with this album. This first track, “Money Makin’ Mama,” has a delicious classic vibe, and features some damn fun work on piano (that’s Paul Oscher on piano). “Let’s go down to New Orleans,” he says before the horns take over during a nice instrumental section. Well, that is not at all a bad idea; the thought of going to New Orleans is always attractive. This, by the way, is one of the songs that he also included on The Deep Blues Of Paul Oscher. It’s followed by “Blues And Trouble.” This one too has that timeless blues sound, which I just completely love, and more wonderful work by Paul Oscher on keys. There is also some great work on saxophone. Sure, the song is called “Blues And Trouble,” but it sounds to me like blues and joy. Some of the lyrics are familiar lines like “You know, I had the blues so bad/You know, I almost lost my mind,” but others come as wonderful surprises. Check out these lines: “She gave me a voodoo doll/Said that doll would make things right/Ward off the evil spirits/Keep me safe all through the night/But I lay down dreaming/And the demons begun to fight/One said ‘I got his soul’/The other said ‘I’ll take his life.’” Man, he works some great stories into these songs.

A good rhythm is established right at the beginning of “Hide Out Baby,” a groove seemingly designed to make you feel all right. This track also features some nice work on harmonica, as does the following tune, “Work That Stuff.” Oh man, that harmonica sounds so good right from the start, helping to create a great, laid back feel. There are some interesting and enticing women populating these songs; in this one, the woman in question can “make you really want to blow your top.” The harmonica is really a second voice on this track, and at one point Paul enters into a discussion with that instrument. With all the classic sounds and vibes on this album, it’s surprising that there is actually only one cover. It’s a cool rendition of “Rollin’ And Tumblin’,” with Sunny Lowdown and Jeremy Dowden providing some backing vocals.

“Cool Cat,” the album’s title track, is actually a few tracks. The first is listed as “Cool Cat Prologue,” and it’s a story, giving the album a live feel, like he’s introducing the song to a live audience. It’s an interesting approach, and in this prologue he introduces some of the elements of the song. Oddly, it also includes the sounds of children playing. Then the actual tune is on a separate track. This instrumental tune has a really nice vibe about it, with a friendly, cheerful sound, a positive sound, particularly in the piano. There is also a groovy section with the bass taking lead, and then some cool work on drums. As I mentioned, the title track is three tracks. The third one is an extended version of the tune, and it’s the album’s final track. Here the saxophone gets plenty of moments to shine, and the bass takes the lead twice. In the background through much of the track we hear the kids playing again. Right at the end, there are some vocals, Lisa Leuschner singing “Cool cat, cool cat, he’s a cool cat.” I feel the regular version might be a bit too short, but this extended version is definitely too long. Also, I wish we could dispense with the sound of children playing, for it actually detracts from the fun feel of the tune.

“Mississippi Poem” is just exactly what its title promises, a spoken word piece about Mississippi, another of this album’s nice surprises. It is followed by a song that mentions Mississippi in its first line, “He was born in Mississippi, raised on a cotton farm.” “Ain’t That A Man” is a song about James Cotton, and it has the feel of a loose blues number played out on the porch. Russell Lee provides the vocals. Lavelle White joins Paul Oscher on vocals on “Dirty Dealin’ Mama,” the other track that was also included on The Deep Blues Of Paul Oscher. This is an odd number about a woman who has been out all night, visiting various men. She tells us, “I went to see the butcher/He put my meat on the grill/I went down to the dentist/Because I like the way he drills.” And she just goes on from there, one serious slut, sleeping with everyone, and certainly feeling no shame about it. “Don’t you ask me where I’m going/And don’t you ask me where I’ve been.” Well, there is no need; she’s confessing all. Or is she just making this all up, offended by being asked where she was all night?

Things then get deliciously jazzy with “On The Edge,” which begins with some wonderful drumming and includes some delightful work on saxophone too. It’s a cool instrumental number, but contains a false ending. Then the drums lead back into it, if only for a brief moment. It feels like it’s not completely developed, but I wish it were longer. This is another of the album’s surprises. That’s followed by “Poor Man Blues,” a blues song touching on one of those perennial blues subjects, being broke. This has something of a standard-type blues sound, though this too is an original number. Russell Lee is on vocals on this one. “When I get my money/I like to go out and play/But I can’t do that/My check’s already spent/If I mess with that money/Then I can’t pay my rent/Because I’m a poor man.”