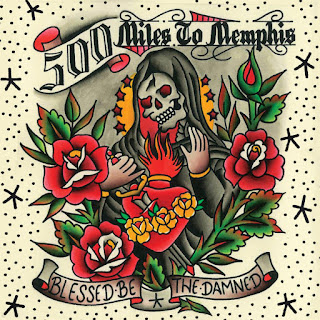 Things continue to be weird and ugly out there, with the racist egomaniac in the White House sinking deeper into the heavy waters of fascism, and pulling the country down with him. It leads many of us to drink frequently, and to follow those drinks with other drinks. But sometimes it is better to just cut loose, to rock out to some damn good music. Blessed Be The Damned, the new album from 500 Miles To Memphis, should do the trick. This disc certainly rocks, and it also has a great deal of country in its soul, helping to keep things grounded in a familiar and attractive reality. This band has been around for like fifteen years, and is made up of Ryan Malott on vocals, guitar, banjo and mandolin; Noah Sugarman on bass, vocals, guitar and pipe organ; Kevin Hogle on drums, percussion and vocals; David Rhodes Brown on lap steel, guitar and vocals; and Aaron Whalen on guitar and vocals. Yeah, that’s a lot of guitar, and it keeps everything driving forward. Blessed Be The Damned contains all original material, written by the band, and features a few guest musicians.

The album gets off to a great start with “The River,” which begins with the vocals delivered to just a bit of accompaniment on percussion, the vocals almost like those from some glorious choir celebrating the day. “Follow me down the mountain/We can sing the blues/The thought of losing you made me shiver/Then you came back and washed me in the river.” Then, when it kicks in, it has something of uplifting rock sound that moves at just the right pace to drive away your sorrows. The song then ends where it began. That’s followed by “Bonnie,” which has a sound akin to Irish folk-punk, which I fucking love, but also a strong country bar sound. Basically, it’s a whole lot of wild fun, to get you dancing and stomping your feet.

“Hold On Tight” is one of my favorite tracks. It’s a totally delicious and energetic rock tune with something of a punk rhythm. “You were crazy/I was crazy too.” You’ll want to crank this one up, maybe invite some friends round to bounce off the walls and drink your beer. It ends like some high school band in a garage, even with a bit of banter. Then “I Said Babe” is a fun song that makes me feel like I should be in a rock club with a bunch of folks in their twenties. It has that kind of energy, that kind of invulnerable attitude. I’m going to need to see this band in concert soon. “I Said Babe” is followed by “Blessed Be The Damned,” the album’s title track, a song with a good, raw power. It’s like a country band suddenly developed demonic strength and appeal, and began preaching the Word of the Weird from the bar stage. Damned good country punk.

“No Doubt About It” is another one to rock out to, and I love the vocal line, which has an enjoyable and bouncy rhythm during the verses. And you might find yourself singing along to the chorus, particularly the line “I’ll get there one day.” The band then gets into a country hoedown-type song, “Piggie Boy,” which is a whole lot of fun. Spin your gal round, turn her upside down, and then it’s suddenly over. The song is less than a minute long, but is a total delight. The next song, “In My Chest,” comes on strong to keep you moving. Toward the end, it becomes a wild bluegrass number for a bit. Actually, the whole thing is a rock and roll bluegrass mash that comes barreling toward us with a fiery energy. Like I mentioned, it seems like this band would be great to see in concert, though I fear my ears might be ringing at the end. “Save Me” seems another tune that would get the crowd bouncing and rocking. “Do you really want to save me/From the past mistakes that I have made/And it’s too late/My fault.” Then “What A Waste” rushes in, grabs you, shakes you about. The disc concludes with “I’m A Bastard,” which begins in a mellower place. And, while it does kick in, it doesn’t pick up in pace, and it then relaxes again. It’s almost a folk song, but one with a serious amount of power. “And I won’t forget/And you won’t forgive/And I’m not expecting you to.”

CD Track List
Blessed Be The Damned is scheduled to be released on January 25, 2019.
Posted by Michael Doherty at 6:52 PM