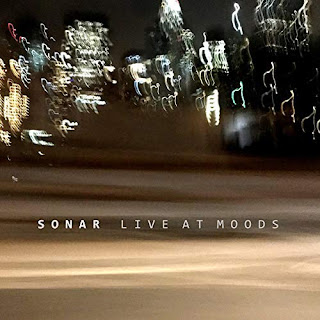 Sonar is an unusual, progressive band based in Switzerland, their music sounding like rock that decided to reside in the darker realms of jazz. The band is made up of Stephan Thelen on guitar, Bernhard Wagner on guitar, Christian Kuntner on bass, and Manuel Pasquinelli on drums. On their new release, a live album titled Live At Moods, the band is joined by David Torn on guitar. Torn also does some live looping, which is interesting, as Sonar seemed to pride itself on not resorting to looping during live performances. The music here is all original, most of it composed by Stephan Thelen.

The album opens with “Twofold Covering,” which feels kind of creepy, kind of intense right from the start, like it’s stalking you, and you can’t shake it, because there is something steady in the rhythm. You feel like something is going to explode at any moment; the sound is dangerous, intriguing. And in the moments when it gets quieter, it is actually more frightening, ominous. Nearing the end, the guitar has something of a psychedelic quality, a serious trip, indeed. Then in the last few minutes you just become enveloped by the sound, by the whirring advance. And this is all performed live, which you don’t sense during the track, the applause at the end coming as a surprise. “Twofold Covering” was originally included on Sonar’s Static Motion. That’s followed by “Waves & Particles,” which also begins with a something of a steady groove, then builds on it from there, creating a very different sensation, conjuring images of otherworldly dances at moments, performed by pixies or sprites. The band doesn’t go too solidly in that direction, refrains from getting immersed in that realm. And certain elements sound like some kind of military radio tuning into the proceedings, which give us a different perspective of the action of the music, where perhaps our observation is affecting it in some way, making it act in some strange unnatural fashion. “Waves & Particles” was originally included on the band’s Vortex album, an album that also featured David Torn.

Another composition from Vortex is “Red Shift,” which has a different sort of rhythm, to keep you just a bit on edge, off balance. But the guitars work to create a strange welcoming, a doorway we willingly pass through. Things scurry about at our feet, but we can’t focus too much on them, for our attention is more at eye level, and the world around us keeps changing, and we peer more intently ahead, as the music grows quieter. Then toward the end the music builds and rises from the ground to fill the atmosphere, and we breathe, move through it and with it. “Tromsø” begins quietly, then begins pulsing, approaching. And we have a decision – step out of its way, or see what it will do with us. But the pounding of the tom stops, as if waiting to see what we’ll do. Then, perceiving no action on our part, it begins again, rising then receding. At one point it seems ready to overtake us, though by then we are digging the groove, which becomes heavier, the bass at the heart of the beast.

“For Lost Sailors” feels like tuning for a moment when it starts. This track grows in intensity too, like a methodical electronic fire devouring whatever may lie in its path, forever hungry, never satisfied. And chaos results from its destructive progress. The smoke clears to reveal an emptiness, and we tentatively step out into it, effectively nullifying the void with our presence, and there are touches of hope in that. Is this electronic pulse our own pulse? “For Lost Sailors” was composed by David Torn. The CD then concludes with “Lookface!” which bursts in with a heavy rock sound, catching us off guard. There is a chaotic feel, but something rises in the middle, attempting to assert control, to tame the electronic specters. And for a moment it is successful. But it is then things turn strange, and you have to stay on your toes, and what survives, what thrives, is some combination of this force and ourselves.