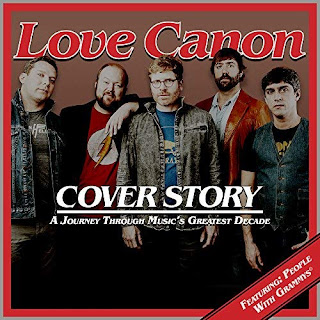 My friends and I grew up in the 1980s. Some of those friends maintain to this day that it was the best decade – for films, for music, for fun. I disagree about the films. The 1970s are far and away the best decade for movies, no question. As for music, there was a lot of great stuff in the 1980s, and a lot of shit. Love Canon has picked some of the better music from the decade for the new album, Cover Story: A Journey Through Music’s Greatest Decade. Though, the decade in question isn’t exactly the 1980s (more on that in a bit). Love Canon is made up of Jesse Harper on guitar and vocals, Adam Larrabee on banjo and vocals, Darrell Muller on bass and vocals, Andy Thacker on mandolin and vocals, and Jay Starling on resonator guitar and vocals. And, yes, the first time I glanced at the CD, I misread the band’s name as Love Cannon, like some enormous erection euphemism. But it’s Love Canon, like the principles of love, or like the sum of someone’s work in the field of romance and kindness, which is much better. Several special guests (including Mark Erelli and Jerry Douglas) join the band on various tracks.

I got into Billy Joel in my childhood, and bought every one of his albums (on cassette). I always dug the instrumental that Love Canon chooses to open the album, “Prelude (Angry Young Man).” It has quite a different feel with these acoustic instruments, but works surprisingly well. This tune came out in 1976, so it seems the decade in question is 1976-1986 (not 1980-1989), which makes sense, as I’ve long maintained that pop music went wrong in 1986. (As a side note, I stopped buying Billy Joel albums when he put out that awful song “We Didn’t Start The Fire.”) Anyway, “Prelude” is an excellent choice to begin this album, and this version is fun. The 1980s saw the release of a lot of fun music, still the best stuff to dance to at clubs. One artist who put out several great songs in that decade is Howard Jones. I saw him in concert (long after the 1980s), and danced my ass off. Love Canon certainly taps into that sense of fun with a wonderful rendition of “Things Can Only Get Better,” while also exploring the song’s serious side, perhaps the bluegrass instruments helping to highlight the song’s positive and comforting message. And I completely love that jam toward the end. This song features Alex Hargreaves on fiddle, and Sam Wilson on backing vocals. “Things Can Only Get Better” is from 1985, as is the song that follows it, Mr. Mister’s “Kyrie” (here titled “Kyrie Eleison”). I was never a big Mr. Mister fan, but I like this version of the song, in part because of two special guests – Jerry Douglas on dobro, and Mike Barnett on fiddle. This version has something of 1970s easygoing vibe.

I saw Paul Simon open for Nelson Mandela in Boston (yeah, an interesting bill that also included Livingston Taylor and Michelle Shocked). It was in 1990, four years after the release of Graceland, but still in that period when Paul Simon was using a lot of strong rhythms. Anyway, “Graceland” is a wonderful song, and Love Canon does an excellent job with it, the vocals having a similar sound to Paul’s original. Aoife O’Donovan joins the band on vocals, and Michael Cleveland provides some excellent stuff on fiddle. The band jams on it at the end, which is great. That’s followed by “Islands In The Stream.” It wasn’t all that cool when I was growing up to like either Kenny Rogers or Dolly Parton, but I loved them both, and totally enjoyed “Islands In The Stream,” no matter how cheesy it might have been. The song was written by The Bee Gees, which would have made it even less cool in the eyes of my peers had they known. Love Canon embraces the cheesy aspect of it, sure, but also stresses the joy and cheer of it. Lauren Balthrop joins them on vocals, and does an excellent job. Plus, there is a horn section. So there.

Okay, this decade that they’re speaking of seems to be longer than most, because they also do Depeche Mode’s “Enjoy The Silence,” which was released in 1990. This is an interesting choice, and it features more good work by Alex Hargreaves on fiddle. Colin Killalea joins the group on guitar and backing vocals. Then Mark Erelli joins them on lead vocals on “Solsbury Hill,” which was released in 1977 and is probably still my favorite Peter Gabriel song. Something about it still manages to bring tears to my eyes sometimes, but also makes me feel good. Love Canon presents it here as part of a medley with an original song, “Icecaps Of Pentatonia” (stretching the decade even more), an instrumental number. Then getting back to the 1980s, Love Canon delivers a cool rendition of Squeeze’s “Tempted,” featuring Erik Krasno on vocals and electric guitar, Daniel Clarke on piano, and Alex Hargreaves on fiddle. The disc concludes with an excellent version of REM’s “Driver 8,” which features Keller Williams on lead vocals. I remember this song getting a lot of airplay when it came out, that it was the song that turned a lot of folks onto REM (those who somehow missed “Radio Free Europe” a couple of years earlier). It was a song that seemed to herald a change in music. I love what Love Canon does with it, particularly that opening section. Mike Barnett plays fiddle on this track.