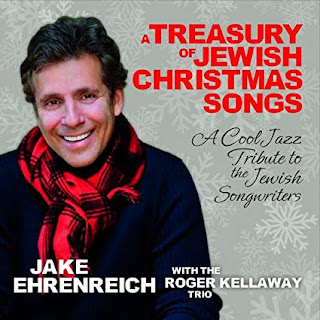 I’m always amused when reminded that much of the beloved Christmas music was composed by Jewish songwriters. It’s one of those delightful facts that make the holiday more palatable. And it is particularly significant in these days of rampant racism and anti-Semitism, bigotry that has again turned deadly. I can’t think of a better time for the release of an album titled A Treasury Of Jewish Christmas Songs. People are in need of a reminder of all we have in common, and this release should help provide that. Not that all that was necessarily the purpose in creating this album. As vocalist Jake Ehrenreich mentions in the CD’s liner notes, this project has personal importance to him. As a Jewish child (born to survivors of the Holocaust), he had a secret love affair with Christmas music, and so this project was a long time in the making. The band for this release is Jack Ehrenreich on vocals, Roger Kellaway on piano, Bruce Forman on guitar, Dan Lutz on bass, and Kevin Winard on percussion.

The album opens with “A Holly Jolly Christmas,” a song whose very title shows it to be a ridiculously happy number. There is such joy in Jake Ehrenreich’s vocal delivery; I swear, you can hear the smile on his face. Plus, this rendition has a good groove. I love that instrumental section, which features some delightful work on piano. This has to be one of the best versions of this song I’ve ever heard. “And when you walk down the street/Say hello to friends you know/And everyone you meet.” Ah, imagine if folks did that year round. That’s followed by “The Christmas Waltz,” which has a mellower, more romantic sound, and features some nice work on guitar. This is one I don’t hear as often, but is a sweet song. It was written by Julie Styne and Sammy Cahn. By the way, the liner notes make a point of listing the songwriters’ birth names, which I appreciate. For example, with this song, the liner notes credit the songwriters thus: “Music by Julie Styne (born Julius Kerwin Stein); Lyrics by Sammy Cahn (born Samuel Cohen).”

I have never cared for “Rudolph The Red-Nosed Reindeer.” I wrote a critique of the song a while ago; it was meant to be humorous, obviously, but I truly dislike the song. That being said, Jake Ehrenreich gives it a pleasant jazz groove, and the instrumental sections are kind of enjoyable. There is more joy in his rendition of “Winter Wonderland,” and I dig that bass line, which keeps it lively. This version has that added section at the beginning which was in the version by Diana Ross, but as far I know is usually not included: “Over the ground lies a mantle of white/A heaven of diamonds shine down through the night/Two hearts are thrilling/In spite of the chill in the weather/Love knows no season, love knows no clime/Romance can blossom any old time.” This version also contains a little tease of “These Boots Are Made For Walkin’” at the end.

A Charlie Brown Christmas is far and away the best Christmas television special that ever aired, and a great deal of its appeal is in Vince Guaraldi’s music. Here Jake Ehrenreich covers “Christmas Time Is Here,” with lyrics by Lee Mendelson. This is a beautiful, thoughtful rendition. That’s followed by a fun version of “Home For The Holidays,” with a strong bass line and lots of nice touches on piano. There is a laugh in Jake Ehrenreich’s voice when he sings the line about the traffic being horrific near the end. Ah, does that mean every day here in Los Angeles is a holiday? The next song, “White Christmas,” mentions Los Angeles in its lyrics, in an opening section that I don’t recall hearing in most versions: “The sun is shining, the grass is green/The orange and palm trees sway/There’s never been such a day/In Beverly Hills, L.A./But it’s December the 24th/And I am longing to be up north.” This rendition begins in a mellow place, but soon develops a nice groove. Whenever I hear this song, I can’t help but think of Vance Gilbert’s play on it, riffing “I am dreaming of a white Kwanzaa.”

“A Christmas Love Song” is a gentle, romantic number with an intimate vocal delivery. This is one I wasn’t all that familiar with. It is followed by a lively rendition of “Let It Snow!” (which is usually listed as “Let It Snow! Let It Snow! Let It Snow!”), featuring some good work on both guitar and piano. I love the joy and excitement in the vocal performance, helping to make this one of my personal favorite tracks. Then “I’ll Be Home For Christmas” has a sweet vibe. That’s followed by a really nice rendition of “Silver Bells.” Interestingly, this track too has an opening section that I don’t remember hearing before: “Christmas makes you feel emotional/It may bring parties or thoughts devotional/Whatever happens or what may be/This is what Christmas time means to me.” I love the late-night, relaxed feel of this song. Yes, it’s peaceful, it’s friendly, it’s everything that Christmas is supposed to be. And it’s another of my favorite tracks. We then get “It’s The Most Wonderful Time Of The Year,” which is certainly up for debate. “It’s the happiest season of all,” we are told. Maybe, maybe not. But this album and Jake Ehrenreich’s delivery might have you convinced. The CD concludes with “The Christmas Song,” which is listed as a bonus track. Apparently, there are two versions of this release, one with this track, the other without (though I can’t find any copies that don’t have the bonus track). Jake Ehrenreich delivers a good, cheerful rendition. “Although it’s been said many times, many ways/Merry Christmas to you.”

CD Track List
A Treasury Of Jewish Christmas Songs was released on November 2, 2018. But apparently it was also released in December of 2017.
Posted by Michael Doherty at 9:51 PM