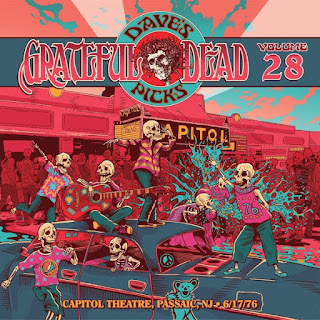 The Grateful Dead took some time off at the end of 1974 to reevaluate their situation. During their break, they recorded a new album and were involved in several side projects, but did only a few concerts. Then in June of 1976, they came back in force, with Mickey Hart back in the band and without the Wall of Sound. The new live release, Dave’s Picks Volume 28, contains the complete show the Grateful Dead performed at Capitol Theatre in Passaic, New Jersey on June 17, 1976.

The band starts the first set with “Cold Rain And Snow,” always a fantastic choice of openers, and this version has a good energy, as well as some smooth vocals from Jerry. Yes, things are off to a good start, and you can hear how appreciative the audience is at the end of the song.  Bob then gets things moving and popping with a nice crisp version of “Big River,” a version to get you smiling and dancing. I love Keith’s work on keys. I know the other band members became unhappy with his work a few years later, but at this point he is totally on. This is a seriously good rendition, with a tight little jam. They follow that with “They Love Each Other,” which in 1976 had a somewhat different feel than it did in 1973, but with a nice slow groove. Then we get a sweet rendition of “Cassidy,” one of my favorite Dead songs. This version has such a good vibe about it. There isn’t a whole lot of jamming, but everything seems to fall into place perfectly. They follow that with a version of “Tennessee Jed” that feels a bit sluggish, but still enjoyable, with some nice touches on guitar. And then Bob leads the band into an interesting version of “Looks Like Rain.” This one has a bit more power to the drums than a lot of versions, and yet Bob and Donna’s vocals retain that gentle beauty. “I only want to hold you, I don’t want to tie you down/Or fence you in the lines I might have drawn.” There are moments when Donna’s vocals are absolutely gorgeous, and the vocal play between Donna and Bob at the end is excellent.

They follow that with a good version of “Row Jimmy,” my favorite element of it being Jerry’s guitar playing, the way he bends notes and makes each one sing at times. Then “The Music Never Stopped” gets you on your feet. The song at this point was still fairly new to folks. Sure, it was included on a studio release the previous year, but not many people had heard it performed in concert yet. And this is a delicious, bouncy rendition. That’s followed by “Scarlet Begonias.” I always enjoyed Phil’s playing on this version, and this song never fails to raise people’s spirits. This version contains a cool bit of jamming, the only real jamming in the first set. The first set then concludes with “Promised Land”

The second disc contains the first half of the second set, which kicks off with a great “Help On The Way.” I fucking love the way they start this version. This song, like “The Music Never Stopped,” was included on Blues For Allah, but had not been played live very many times before this show. They were still doing the “Diga” bit at this point. It leads straight into an interesting version of “Slipknot!” and on into “Franklin’s Tower.” “Franklin’s Tower” is another of those songs that get you dancing and feeling good. “If you get confused, listen to the music play!” Oh yes. That leads straight into “Dancing In The Street,” with the new disco-like arrangement that would be included on the following year’s studio release, Terrapin Station. This rendition contains a nice long, groovy jam, and it leads straight into “Samson And Delilah,” which would also be included on Terrapin Station. This is an energetic, fun version. The second disc then concludes with an absolutely wonderful rendition of “Ship Of Fools,” with Jerry delivering a great, passionate vocal performance. This is one of the best versions of this song I’ve heard.

The third disc contains the rest of the second set, beginning with “Lazy Lightning,” another new song, one that Bob Weir recorded with Kingfish during the Grateful Dead’s break. It leads straight into “Supplication.” That’s followed by a sweet and slow “Friend Of The Devil” that is gentle at times. Keith delivers some really nice work on keys in the second half of the song, and Jerry’s guitar lifts us all up. Bob follows that with “Let It Grow,” which has a dance rhythm at the start, which is interesting and a little odd. But the jam in this version gets pretty good, and it leads to a relatively short but playful drum solo. And then suddenly we’re back in “Let It Grow,” but it isn’t long before the band eases into an excellent and moving version of “Wharf Rat.” Then, as with the first set, they conclude the second set with a Chuck Berry tune. This time it’s “Around And Around,” which starts off slowly, then toward the end picks up in pace.

There is no encore, but there is some filler included on the third disc. I have mixed feelings about filler. On the one hand, I’m happy for every bit of Grateful Dead music I can get my hands on. On the other hand, I get nervous that its inclusion means that there are no plans to ever release the complete shows the filler comes from. And the filler on this disc comes from two different shows, both from this same tour. First we get a really nice “Sugaree” from June 23rd in Upper Darby, Pennsylvania. Then we get a beautiful “High Time” from June 28th in Chicago. The vocals are just completely wonderful, and everything sounds exactly right. This filler is one of the highlight of the entire three-disc set.