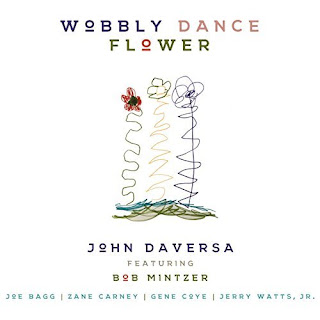 Honestly, I picked the John Daversa CD Wobbly Dance Flower out of the stack because of its title. I was up for some fun, vibrant music, and figured this might be just the thing. And indeed, it was. This disc features mostly original compositions by John Daversa (with only one exception). Joining the trumpet player on this release are Bob Mintzer on tenor saxophone and bass clarinet, Zane Carney on guitar, Joe Bagg on piano and organ, Jerry Watts Jr. on bass, and Gene Coye on drums.

It opens with a tune titled “Ms. Turkey,” and immediately I’m into it, the horn getting the song started like some fun, glorious announcement. There is certainly a great amount of joy to this track, but the tune goes in some exciting directions too, and there is some excellent drumming. Just the thing to pick you up. That’s followed by the album’s only cover, a cool rendition of Charlie Parker’s “Donna Lee.” It has kind of a slow groove at the start, and some wonderful stuff on horn. I also dig that work on piano; and wow, listen to that bass beneath it. This track features some impressive playing, particularly in the second half of the track, when it starts to cook.

“Be Free” begins like a call to get out of bed and onto the dance floor, which might in fact be the entire landscape. I can imagine a crowd dancing to this one. And then when things start getting a bit wild, like thirty seconds in, the crowd leaps into the air, melts into trees and façades, and the buildings begin rumbling and dancing in their own way. It gets a bit chaotic, but it’s like coloring book chaos, you know? All fun, all perfect in its way. And why not? After all, it’s titled “Be Free,” and it seems to express a freedom to go off in different directions, to be a person or a cavorting tree or whatever you can draw or imagine. Then at the end, it returns to the beginning, dropping us back off where we started. Then we get “Brooklyn Still,” a mellower, kind of bluesy, soulful tune that builds toward the end.

“Wobbly Dance Flower,” the title track, is a lot of fun, as you’d expect. Every part of your body will want to dance, perhaps doing different dances, but not to worry, you’ll come together again later. By the way, the song’s playful title came from Daversa’s young daughter, who also created the album’s artwork. That’s followed by “Jazz Heads,” a track I love right from its opening. It has a great playful, almost child-like quality. I can imagine this song playing in a scene from The Muppet Show, with some delightful Muppet dancing with the episode’s guest star. Actually, I want to see that. Let’s bring back that show. Hey, they’re bringing back every other darn show that ever existed (though obviously some aren’t lasting as long as one might have thought), so let’s (once again) bring back The Muppet Show. There are some good conversations between instruments in this track, and this one too returns us to the beginning, after taking us on a wonderful journey. That’s followed by “Meet Me At The Airport,” the title fitting well its mood and themes. There is something very positive about meeting someone at the airport, or being met at the airport. For most of us, it means seeing someone we haven’t seen in a while, someone we very much want to see. And this track has an excited, happy quality. As it goes on, it then settles into conversation, like the two people are catching up, or like several people are catching up, as each instrument adds to the conversation. I especially like that lead on bass. This tune becomes powerful, forceful at the end.

We then get “You Got A Puppy?!” Okay, first I have to say I really dislike when people put a question mark and exclamation point together. Pick one! Okay? (Though it’s not as irritating as when people use multiple exclamation points or multiple question marks, an offense that deserves a serious smacking.) That being said, I do like this track. It opens with some drumming, and moves a good clip. It also features more great work on bass. And I really like what Zane Carney is doing on guitar. Bob Mintzer’s work on bass clarinet is also absolutely wonderful. But of course it is the trumpet that really soars and cooks here. The entire band has plenty of opportunities to shine, even though this track isn’t even three minutes long. A whole lot of deliciousness is packed into that short span. The CD then ends with an even briefer number, “Extra Credit,” which is less than a minute long. This strange, electronic jam features cool work by Joe Bagg on organ. I’m curious where this one would go, given more time.