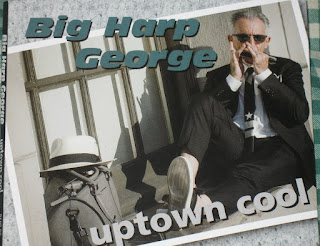 Big Harp George, on his new album, sounds like he’s been on top of things for a long time, so it’s surprising to learn that he released his debut CD only four years ago. He followed that with 2016’s Wash My Horse In Champagne and now with Uptown Cool, this new release featuring all original material, written by George Bisharat (Big Harp George). In these songs, he tackles his subjects with humor and style, and is backed by a great band, which includes Chris Burns on keys, Alexander Pettersen on drums, Joe Kyle on bass, Kid Andersen on guitar and bass, Little Charlie Baty on guitar, Michael Peloquin on saxophone, Mike Rinta on trombone and tuba and Derrick “D’Mar” Martin on percussion. Loralee Christensen and Derick Hughes provide backing vocals. Yes, this is the blues, but there certainly is a whole lot of joy in these tracks.

The album opens with “Down To The Rite Aid,” which is some fun, slightly goofy blues, with delightful work on horns. It has a kind of classic sound, while being about a modern place and modern issues, as the line playing with the idea of having an erection that lasts more than four hours. The lyrics also include a reference to The Walking Dead. The song is delivered with a sense of humor, and with plenty of good work on harmonica. I love the way the harmonica interacts with the horns and guitars in that instrumental section. Likewise in “Internet Honey,” he employs a delicious classic sound to tackle a modern subject, online romance. “Swipe left, swipe right/I really can’t figure it out/I need that cyber magic/Right away, without a doubt/I want an internet honey.” It’s a fun song with more cool work on horns, particularly toward the end. Oh man, I wish that jam went on a bit longer; it was just starting to really groove and cook when suddenly the song is over. I’m guessing from these moments that this is a band worth seeing in concert.

Another modern subject is addressed in “Alternative Facts.” In these sad and disturbing days, Big Harp George sings, “I always thought that truth mattered.” It’s a good song, and I am always in favor of poking fun at Trump and his gang of mendacious assholes, but this is also a serious matter. We can’t let honesty and truth be things of little consequence or things of the past. I can’t wait for Trump to be a thing of the past. Anyway, I dig the groove, and of course there is more good, expressive work on harmonica. “Don’t get shackled by the truth/Only fools think that truth matters/When in truth, it just distracts/You’ll never reach your vast potential/Without alternative facts.” At the end it mentions “fake news” as the excuse to use when you’re called out on your lies. What I want is for reporters to never let up on Donald Trump or Sarah Huckabee Sanders, to not let them get away with bullshit responses. Just keep asking the questions, demand answers. Keep on them until they fucking explode. And then toss their pieces into the trash, so the country can get back on track.

“Nobody’s Listening” is a wonderful, slow number about the end of a relationship (always a good subject for a blues tune), where we are given the man’s assessment of the woman’s lesser qualities. “How many nights, baby, did we go out with friends/You’d drop an insult from which no friendship mends/And I’m sorry to share with you/Nobody’s listening anymore.” Nice, right? “And now the time has come, dear/For you to find your own way/I’m done cleaning up your messes/That’s why I left you yesterday.” I love this song, particularly the way the horns are used in this track, supporting him and almost like comforting him, backing him up as if they’d been present during these scenes with him and his ex-girlfriend. They are like good friends. Plus, there is some nice work on both keys and guitar. And this line describing the woman is just perfect: “Some kind of magnet for woe.” I think we’ve all known someone that that line accurately describes. That’s followed by a fun, upbeat instrumental track titled “In The First Place,” the harmonica acting as the main voice, engaging the other instruments in a bit of conversation, with some call and response.

“Cold Snap By The Bay” is a very cool tune, with a mean vibe and some stunning and moving work on horns over a serious groove, plus a really good vocal performance. And then there is that great work on keys. Man, everything is working so well here. This is one of my favorite tracks. That serious song is followed by a fun tune with something of a New Orleans vibe, “Just Calm Yourself.” Loralee Christensen delivers a strong vocal performance, singing lead in certain sections. Then “Uptown Cool,” the album’s title track, is a nice, kind of bouncy instrumental track. The CD ends with “Lord Make Me Chaste,” a humorous tune with a bit of gospel thing. “Lord make me chaste, but not yet.” And while we’re on the subject, here is a note to those out there who confuse “celibate” with “chaste”: Quit it. “Celibate” simply means “not married.” The word has nothing to do with sex or a lack thereof. The word you’re looking for is “chaste” (as Big Harp George is obviously well aware). Please pass that on. Thanks.

CD Track List
Uptown Cool is scheduled to be released on July 16, 2018 on Blue Mountain Records.
Posted by Michael Doherty at 10:50 AM